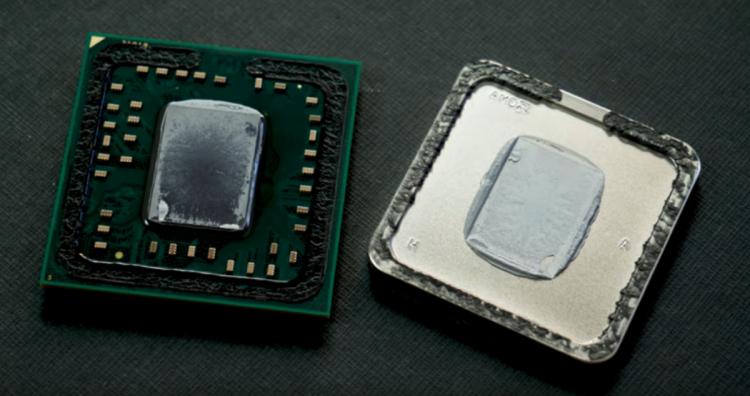 The debate over the use of solder versus thermal paste as the thermal interface material between CPU die and heatspreader is one that has raged ever since Intel moved to the former on their enthusiast-class 'K' CPUs. For their part however AMD have and continue to use an indium solder on their performance CPUs, citing improved thermal conductivity. Now, after a period of détente, conversation has flared up again after it was discovered that the recently released AMD Raven Ridge APUs are using thermal paste.

Well, not really. There are great reasons for going down either route (read this excellent 2015 primer on the subject by der8auer, and while you're at it check out his Youtube channel) ranging from thermal performance requirements through to margins and expected failure rate from taking the solder route. As a matter of course AMD APUs have used TIM over solder, due mainly to their low margins. Relatively few consumers are impacted either way, but it adds a little more welcome spice into the discussion over the relative merits of the Ryzen 2x00G APUs and their 1000-series CPU counterparts.

True overclocking enthusiasts can now rest easy however - AMD aren't back-sliding into using paste TIM as a matter of course. Technical Marketing representative Robert Hallock took to Reddit to reassure the faithful that the upcoming 2000-series CPUs on the Pinnacle Ridge platform - likely a refresh of Ryzen rather than 2nd generation architecture - will still use solder.

In the mean time brave owners who really want that extra thermal performance can give delidding the APU and replacing the TIM with liquid metal a go. Not for the faint of heart: