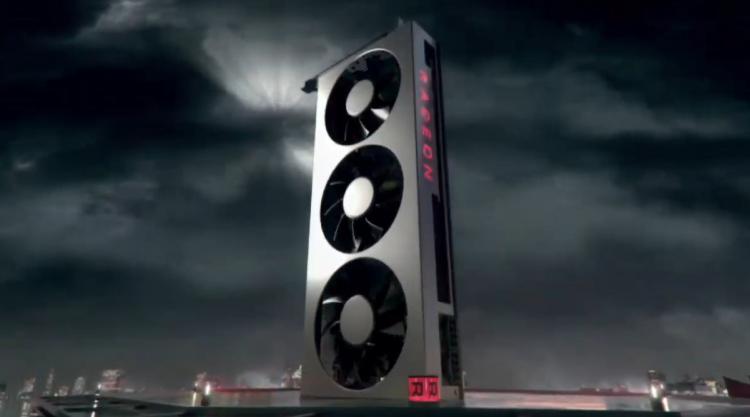 AMD President & CEO Dr. Lisa Su's CES 2019 Keynote has just ended, and it certainly came with a few surprises. While new CPUs and industry partnerships were mentioned, the biggest eyebrow-raiser was almost certainly the Radeon VII's reveal, a new GPU based on 2nd generation Vega architecture.

The Vega GPU architecture has been of middling success since its launch, buoyed in recent months thanks to aggressive price realignment and new driver updates to increase functionality. Built on the 14nm manufacturing node, it is relatively power inefficient compared to its major rivals, the NVIDIA GeForce GTX 1070 and 1080, and cannot compete with the GTX 1080Ti on in-game performance. NVIDIA's RTX 20-series was always going to be difficult to match.

Taking to the stage at CES 2019, Dr. Su unveiled the upcoming Radeon VII enthusiast-class desktop GPU with some preliminary benchmarks and a brief live demo. Despite warnings at Computex 2018 that early next-generation 7nm GPUs probably wouldn't be oriented towards consumer markets, the Radeon VII ('Radeon Seven') contradicts their prior announcements. Based on 2nd Generation Vega rather than next-Gen Navi, it is manufactured using TSMC's 7nm process, affording it improved power efficiency and (likely) better operating frequencies within the same thermal envelope.

AMD have revealed that this is a 60 Compute Unit GPU, which is an interesting titbit of information. The prior generation maxed out with 64 shaders on Radeon RX Vega64, so either the core has slimmed down or some of the shaders are deactivated on this SKU. If the latter is true, it would mean that a 64 CU design would be available to release later in the year (or as a Radeon Instinct model exclusive to the enterprise and compute segments).

Radeon VII should have the same TDP as Vega64, but AMD claim it can achieve up to 25% higher performance at 4K resolution than its predecessor despite the lower shader count. Assuming that drastic changes haven't been made to the Vega architecture, this means that the GPU is likely running at much higher operating frequencies than the base/boost 1247/1546 MHz of Vega64's reference specifications. 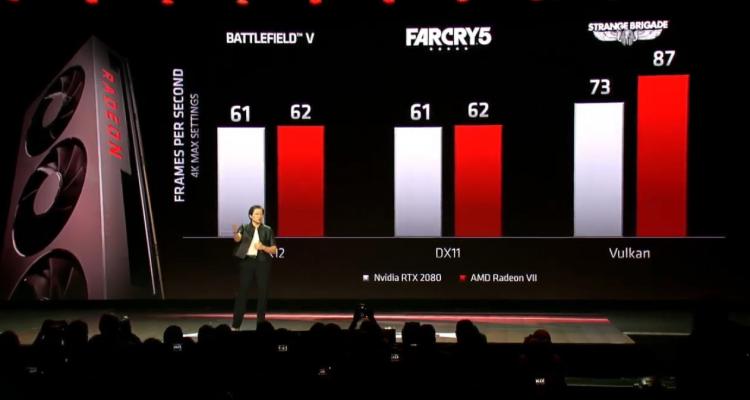 Another improvement versus the prior generation is an increase in the frame buffer size to 16GB from 8GB. While excellent for certain compute tasks and high resolution rendering, that's definitely going to inflate the price for consumers. In comparison, NVIDIA's RTX 2080 Ti has 'only' 11GB of GDDR6 memory and the RTX 2080 is equipped with 8GB.

This reference design incorporates a triple-fan cooler (not, thankfully, a blower design), and a silvered brushed-aluminium shroud links it aesthetically with the Radeon RX Vega 64 LE cards from 2017. Unsurprisingly there is no word on partner variants.

So, what's the damage? Well the Radeon VII is priced to match the GeForce RTX 2080 at an MSRP of $699 (approx. £689 inc. V.A.T. in the UK), and will be available from February 7th. That's a bold statement from AMD considering that NVIDIA's lineup boasts RTX technology including support for Microsoft DXR to accelerate real-time ray tracing.

With NVIDIA's inflated pricing AMD were poised to capitalise with a 7nm GPU that aggressively targets the price/performance metric. Based on comments made during the Keynote Radeon VII doesn't do that. Instead it's shuffled in as a schizophrenic hybrid for gaming, content creation and compute - much like the original Vega 64 LE. In many respects it's even more niche a product than its closest rival.

Clearly AMD have more in the pipeline. This release has all the hallmarks of a stop-gap measure while they prepare for Navi, but it's hard to see how a seven hundred dollar card will help them to retake market share. Still, it appears they've been successful in squeezing yet more performance out of an ageing architecture, which is no mean feat.