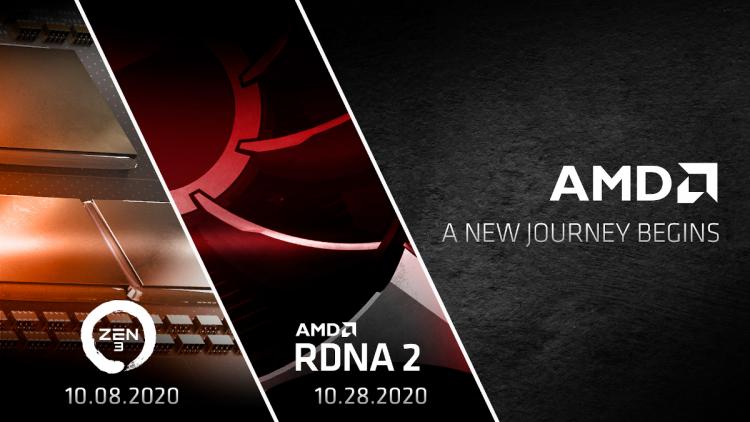 AMD have finally broken cover today and offered some solace for enthusiasts keenly awaiting word of their next-generation CPU and GPU products. An announcement made through social media channels today has revealed that the 8th and 28th of October are days you'll want to mark in your calender, for Zen 3 and RDNA 2 respectively.

Zen 3 is AMD's follow-up to Zen 2, their first chiplet architecture and backbone of the Ryzen 3000-series. Although rumours continue to swirl over changes to the underlying core complex (CCX) and hence number of processor cores in each SKU, the only concrete information we currently have is that it will be manufactured on an optimised update to TSMC's 7nm process and utilise the AM4 socket. Big things are hoped for - notably bumps in both operating frequency and IPC - and hopefully AMD will divulge plenty on October 8th.

The RDNA 2 graphics architecture meanwhile is a fixture of both XBOX and Playstation's next-generation consoles, albeit in a form quite dissimilar to a discrete graphics card. October 28th will likely introduce the architecture to PC gamers in more detail and depth, expounding on ray-tracing and other capabilities that will differentiate it from RDNA 1 AKA the RX 5700-series. Performance, however, will be key; AMD desperately need to get back on terms with the competition's enthusiast-class cards.

October will be an awkward time for the red team, fighting a rear-guard action against NVIDIA's RTX 30-series on one hand and seeking to extend gains made against Intel on the other. However it goes, the month will likely set a tone for the year to come.