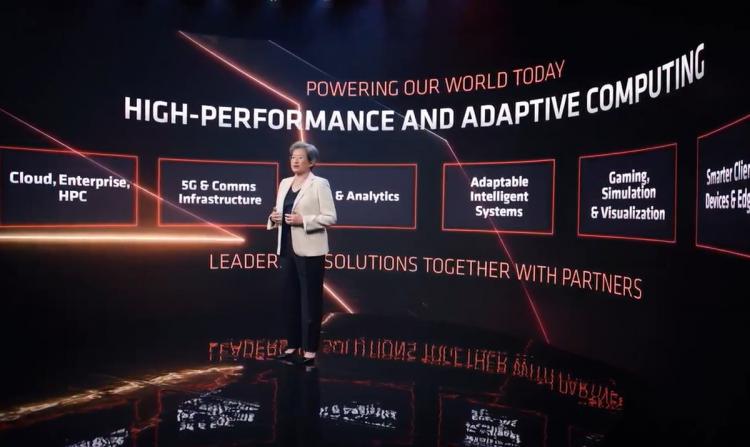 AMD began Computex 2022 with the first major keynote of the hybrid event. Presented by Chair and CEO Dr. Lisa Su, a pre-taped livestream discussed some of the major innovations released by AMD in recent months, a continued focus on gaining a competitive advantage in Ultrathin notebooks, and a preview of things to come for the Ryzen 7000-series CPUs and 600-series motherboards. Lets start with the latter.

2022 will usher in the end of AMD's socket AM4, an ecosystem that has been a fixture of the industry since 2016 that provided stability and consumer confidence when the status quo was of a new mainstream socket every 18-months. It's proved to be enormously successful, and over 70 million AM4 processors have shipped since its launch. However, no king rules forever; this autumn AM5 will launch, arriving to unlock the potential of Ryzen 7000-series CPUs and 600-series motherboards, and a new reign will begin. 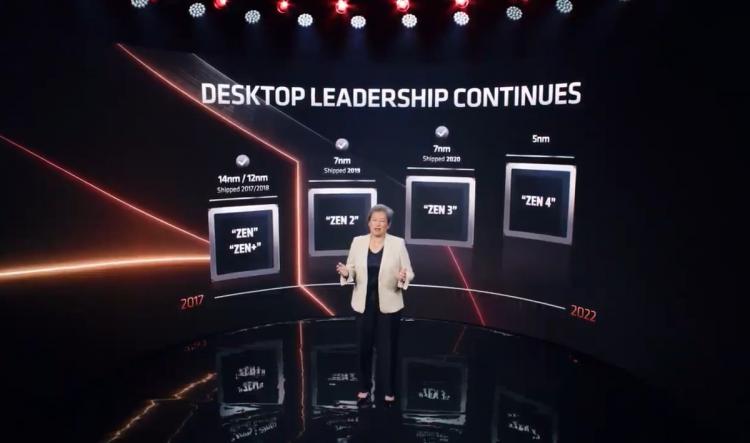 The AM5 platform is the first AMD mainstream socket to utilise an LGA mounting system, replacing the PGA chips of the past. This will allow them to pack pins more densely into the Chips footprint, increasing its capabilities without changing the amount of space the processor takes up on the motherboard. As a result AM4 CPU Coolers will be compatible with AM5 motherboards, letting consumers take advantage of the terrific variety available on the market today.

More crucially for the socket's long-term viability, AM5 introduces support for SVI3 power infrastructure. It will be able to drive more power to the socket and maintain greater signal integrity for higher memory and I/O clock speeds; the new platform will be able to support CPUs with a TDP up-to 170W, from 105W on AM4. The first generation will also support DDR5 memory on 600-series motherboards, and we're only just starting to discover how far this new memory standard can be pushed. 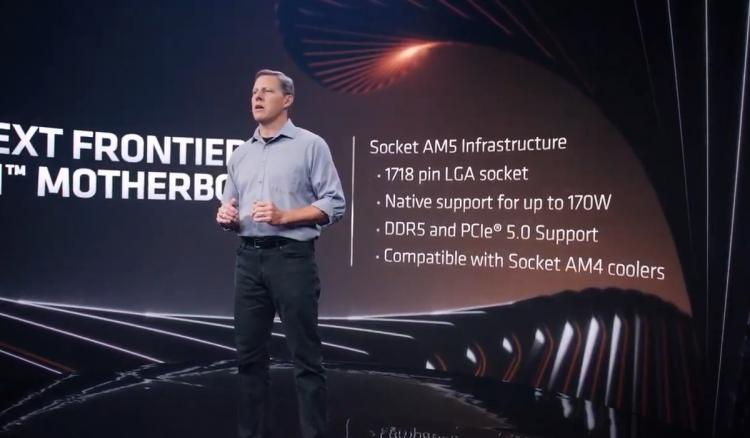 AMD remain coy over the capabilities of their upcoming 7000-series, which is understandable considering it's still months before we see them in the flesh. They did however highlight key aspects of its design.

The processor range will incorporate a chiplet design supporting up-to two 8-core, 16-thread Zen4 chiplets manufactured using TSMC's 5nm processor. In the transition to Zen4 the amount of L2 cache per core has doubled to 1MB, reducing latencies and increasing IPC. A large IO die has been re-engineered on 6nm to incorporate dual-channel DDR5, advanced I/O, PCIe Gen5 and (for the first time on enthusiast-class desktop parts) on-chip RDNA graphics. 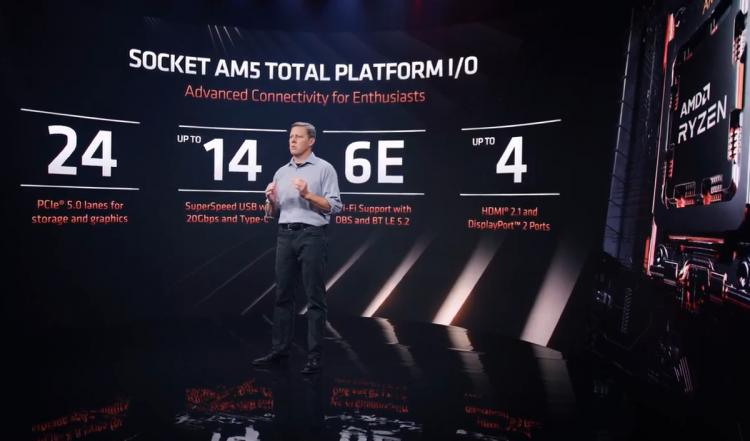 AMD are projecting around 15% IPC improvement over 5000-series CPUs, which should be further augmented by significantly improved clock speeds. The distance between the range and the Ryzen 7 5800X3D might not be all that great, but it should easily outpace Zen3 processors without 3D VCache and give consumers plenty of reason to upgrade over ageing Ryzen 2000-series and 1000-series systems.

By including on-chip graphics the AM5 platform can supply up to 4 independent display outputs with discrete GPU, depending on motherboard support. Other I/O options are equally comprehensive, including up-to 24 PCIe Gen5 lanes, 14 USB SuperSpeed ports (including 20Gbps ports), WiFi 6E networking and more.

This range's release is still months away, so AMD are naturally also coy when it comes to performance metrics. A quick playthrough demo on a pre-release 16-core part and multi-core Blender rendering comparison to Intel's Core i9-12900K were all we got to see, but the CPU is clearly expected to handle strongly threaded multi-core workloads with ease. It remains to be seen just how well it holds up across a gamut of applications.

AMD are attempting a very risky strategy with their new motherboard range. In partnership with manufacturers, they're further segmenting the range with an upper-tier 'Extreme' variant of the X670 chipset. X670E motherboards will have enhanced power delivery and I/O features, as well as ensure that both GPU and M.2 storage will support PCIe Gen5 signalling. Partners will be showcasing 600-series solutions throughout Computex, and you can expect a lot of time to be spent highlighting these new halo X670E designs. 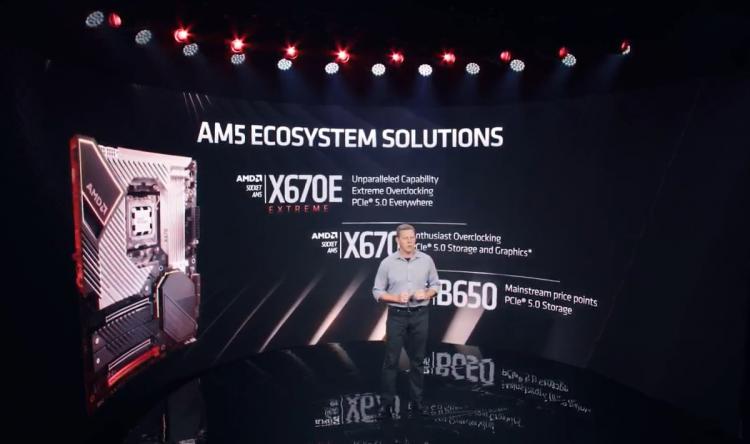 The vanilla X670 meanwhile step down in one clear aspect - they will support 'at least one of' PCIe Gen5 graphics or storage. You should nonetheless still expect high I/O and overclocking capabilities from this platform, making it ideal for those who perhaps don't expect to need the new ultra-fast storage options during the life-time of the system. PCIe Gen4 should still be supported where Gen5 isn't.

Finally, the entry-point into the ecosystem will be through the B650 motherboard range. As well as poorer power delivery compared to its enthusiast siblings and thus lower OC capabilities, B650 motherboards will only support PCIe Gen5 through storage. This compromise may chafe a few enthusiasts looking to get full-fat next-gen graphics support on the cheap, but it may prove to be ideal to make B650 as affordable as possible. 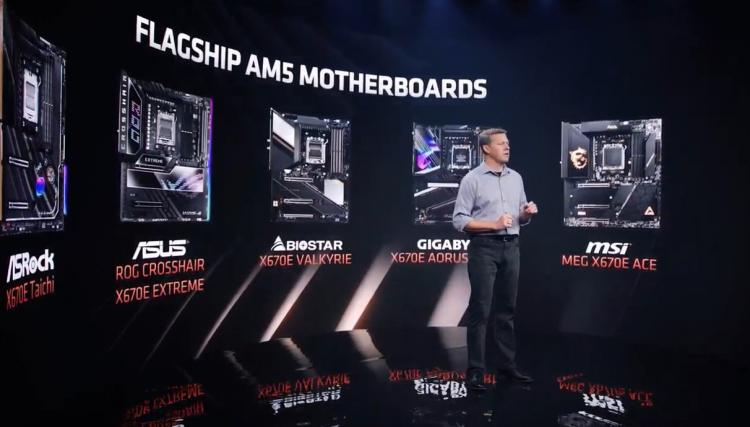 As has been the case for prior AMD platforms, much of the final experience users will receive will depend on those features motherboard manufacturers bundle in at a particular price point.

AMD have stated that Ryzen 7000-series CPUs and 600-series motherboards will be launched in Fall 2022 (i.e. this autumn).

Laptops - ultra-thin and gaming with an affordable twist 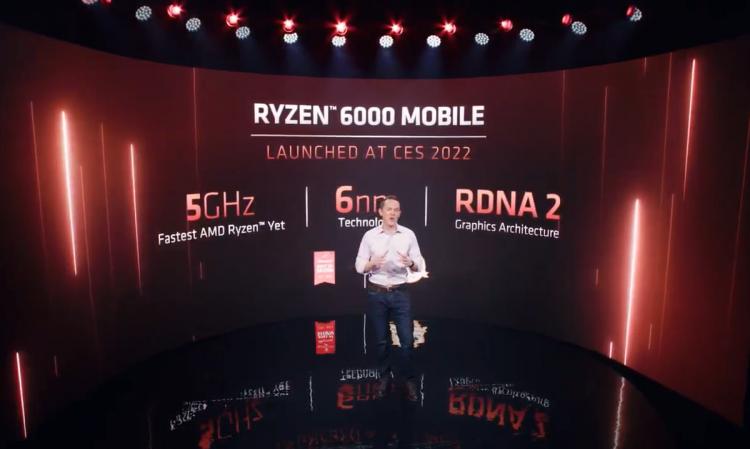 While discussion coming out of the keynote will naturally focus on the upcoming desktop platform, in reality the majority of the presentation either covered old ground from earlier in the year or a broadening of AMD's range of ultrathin and gaming laptops. AMD have for years been playing catch-up with their competitors in this arena, struggling to ship units even when their on-paper claims were justified.

Since the launch of Ryzen 6000-series APUs for laptops their designs have been able to go toe-to-toe with Intel's Alder Lake processors on productivity performance and battery life, as well as offer new options for gaming in extremely lightweight form factors. All they seemingly need are more models from big manufacturers in both the consumer and commercial spaces. 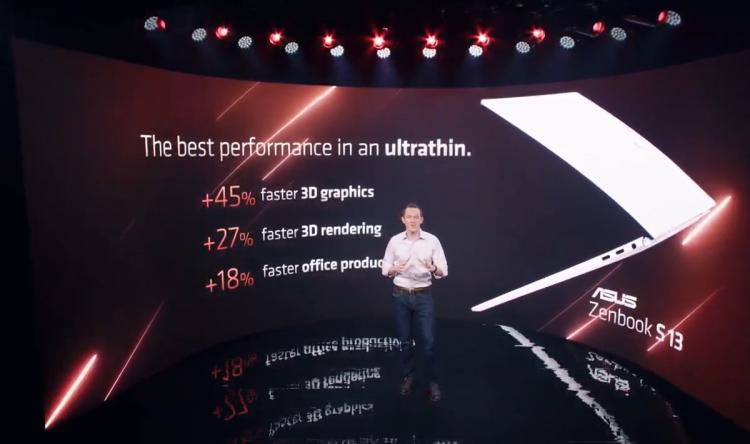 It's no surprise that they highlighted designs such as the high performance ultrathin ASUS Zenbook S13, capable of 60fps in Godfall despite weighing just 2.2lbs. However their most significant model might be Lenovo's Thinkpad Z for commercial applications, which is exactly the sort of model they need to get in the hands of influential IT purchasers if they can achieve the sorts of battery life boasted by the HP Elite range. 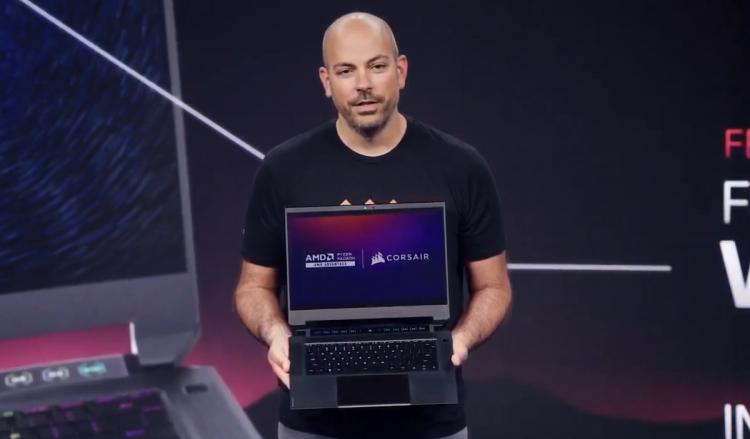 AMD also unveiled CORSAIR's VOYAGER a1600 Gaming Laptop, powered by AMD throughout but with plenty of CORSAIR and Elgato's proprietary technology too. It is extremely notable that a brand as big as CORSAIR tapped AMD for the new design rather than their competitors, with whom they worked on the ONE Series desktop systems.

There was however one final titbit that should be enough for consumers and educators to sit up and take notice. AMD announced Mendocino, an affordable platform for Windows 11 laptops and Chromebooks between $399 and $599 that includes up-to four Zen2 CPU cores and RDNA2 graphics built on a 6nm process. It offers up to 10 hours battery life on a mixed-use load and could finally see AMD make deep inroads in this segment. 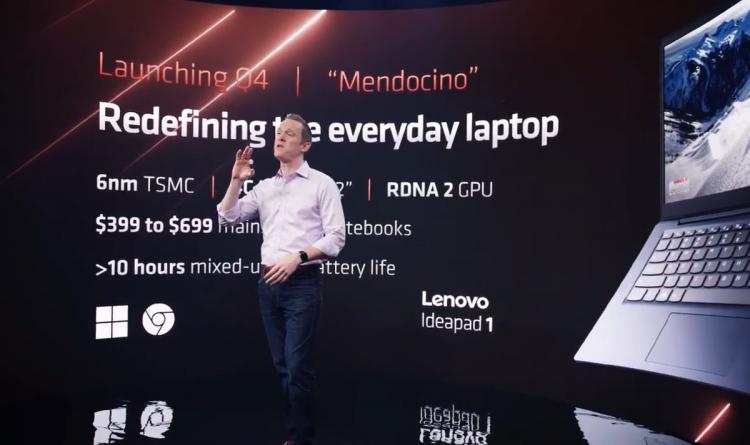 Last but not least we come to AMD's software ecosystem. For a couple of generations they've leveraged their presence in both the CPU and discrete graphics space to create performance and power-saving technologies, balancing critical factors in the mobile space where these concerns are far more pressing. Some, such as Smart Access Memory (SAM), have been imported into the desktop space where it makes sense. As a totality AMD are calling this their Smart Software ecosystem.

Joining the technologies later this year will be SmartAccess Storage, an implementation of Microsoft's DirectStorage API that circumvents system memory to load data directly into VRAM from high-performance NVMe drives through the PCIe bus. It will also leverage on-GPU technologies for streamed data decompression. Technologies such as DirectStorage are expected to greatly improve game performance, particularly texture streaming, to offer seamless asset loading for streamlined gaming experiences. 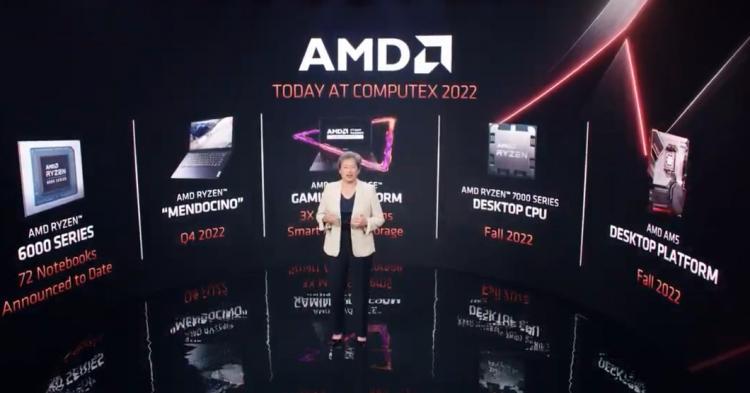 AMD's Computex 2022 Keynote might not have offered the level of technological depth that we might like, but it serviceably set the stage for a big Q4 that will see the release of AMD's first socket update in half a decade. It was also notable however that RDNA3 GPUs were not covered; understandable given the recent Radeon 6000-series refresh, but leaving NVIDIA with a open door to scooping up the attention later today in their own keynote.

For their part, Intel might be relieved that the 7000-series isn't arriving this summer, helping them get Raptor Lake processors launched in a competitive time-frame. The same goes for their Alchemist discrete GPUs, although they might have their lunch eaten by the green team anyway after extended delays.

We should know more in Q4, with AMD likely to release more technical information on their CPU and platform architecture before then. You can catch-up with the 30min keynote yourself here.