When it was first announced rumours circulated that AMD's Tonga GPU, central to the then brand new Radeon R9 285, included a 384-bit wide memory bus that was never fully enabled. That seemed rather unlikely at the time - after all, why neuter a GPU if there was no technical need to do so? - but nonetheless this underlying belief continued and even influenced reporting of the R9 380X's technical specifications earlier this year. Now AMD Radeon Technologies chief Raja Koduri has confirmed to PC Perspective's Ryan Shrout that Tonga was indeed conceived as 384-bit part, but market requirements resulted in a smaller bus for the final retail cards.

Whilst it was once AMD's Flagship card, the 3GB Tahiti designs had later been outclassed by the 'Hawaii' R9 290 and 290X, pushing them down in AMD's product stack and requiring revised pricing to match. AMD released the Tonga Pro as the Radeon R9 285 in September 2014, ostensibly replacing the Tahiti-based Radeon R9 280, with just 2GB VRAM to go alongside its revised GCN 1.2 architecture. Compared to the 3GB Tahiti designs Tonga was and is a much simpler and more affordable card to produce, and hence a closer match to price/perf expectations. 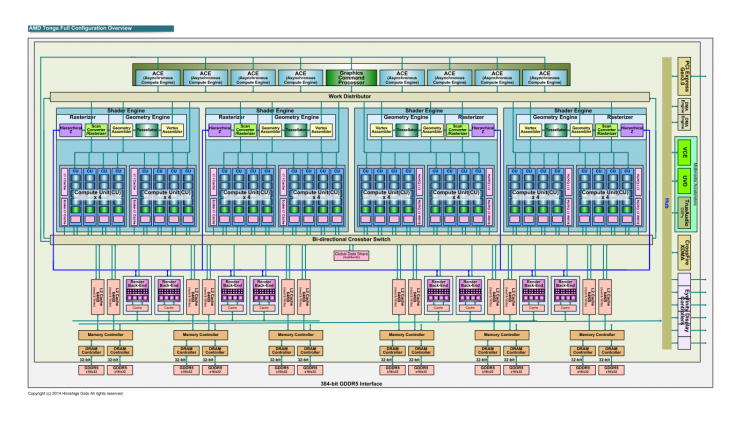 AMD's memory interface technology scales the GPUs memory bus with VRAM frame buffer size, i.e. the more memory chips, the wider the memory bus needed to be. Although it was capable of addressing up to 3GB through a 384-bit bus, by restricting retail models to 2GB each Tonga GPU only made use of eight of the twelve 32-bit memory controllers, and hence only a 256-bit total bus width. The only way to increase memory size without changing the number of memory chips was to double the density of the memory, which they did on 4GB models of the R9 285 and R9 380.

AMD have today moved past the 3GB barrier at the mid-range but retaining a 256-bit memory bus on this latest iteration to the Tonga family continues to make sense. It's meant that few changes needed to be made to the underlying partner PCB designs for the new card, and the price of double-density GDDR5 RAM have kept costs at relative parity. Moving to 3GB would change the number and layout of memory chips, and thus require a whole new card PCB be developed by partners.

For that reason we're unlikely to see a fully unlocked Tonga XT with 3GB VRAM and 384-bit memory bus in the future. Understandable perhaps, but still a shame - it would give us a perfect comparison point for the improvements AMD made between GCN 1.0 and 1.2.