According to leaked slides from their upcoming 'Next Horizon Gaming' livestream, AMD are planning to unveil details of both the 16-core Ryzen 9 3950X gaming CPU and Radeon RX 5700 XT GPU to an eager audience primed for gaming reveals; after all, it is E3 week. The leak does spoil the surprise, but there should be plenty more worth tuning into this evening.

The first of the slides details a new CPU tech. enthusiasts were probably expecting: a 16-core Ryzen 3000-series variant. Six, eight and twelve-core models were already announced during Dr. Lisa Su's Computex 2019 keynote, and a 16-core model with both 8-core chiplets fully enabled was assumed to be a possibility. That is now confirmed as the Ryzen 9 3950X, a SKU that's been dubbed the 'world's first 16-core gaming CPU'.

Sixteen cores, support for double that number of threads, 72MB Cache and a 4.7GHz Boost Clock - that all amounts to a deeply impressive mainstream flagship. But perhaps the most impressive part is that it remains within a 105W TDP envelope rather than exploding to 150W+, a testament to the efficient combination of AMD's Zen 2 architecture and TSMC's 7nm process. On paper, it's more than a match for the Threadripper 1950X, AMD's 2017 16-core/32-thread HEDT flagship that only boosted to 4GHz and didn't support PCIe 4.0.

Update: The Ryzen 9 3950X is expected to have an MSRP of $749 USD, significantly higher than the 12-core Ryzen 9 3900X's $499 USD MSRP. AMD also keeps a simple packaging with the Ryzen 9 3950X unlike the design AMD used with the Threadripper processors.

The bigger news, however, might be further details on the Radeon RX 5700 XT, AMD's upcoming GPU based on the new Navi microarchitecture and manufactured on TSMC's 7nm process. Pricing is once again not indicated, but basic specs tell the tale of a mixed generational improvement.

Three clock speeds are listed on the slide: a maximum Boost clock, Gaming clock, and Base Clock. AMD will probably explain relevant differences during the livestream, but our best guess is that the typical operating frequency when gaming will start from the 1755MHz Gaming clock and push to a maximal Boost clock under optimum conditions. Exceeding 1.75GHz for any length of time is a big step forward for AMD, who struggled to reach these frequencies efficiently on both Polaris and Vega silicon.

So while the RX 5700 XT fails to match Vega56 (a card which can be purchased today for less than £250) in raw compute power, an architecture better optimised for gaming can leverage its horsepower to greater effect. Such has been the case with NVIDIA GPU architecture, designs that have poorer raw TFLOPS processing power but an equivalent performance from an FPS perspective.

At first glance, it appears therefore to be relatively well positioned as a replacement for the Radeon RX 580/590 in the mainstream segment, but a tougher sell when compared to the ageing Vega56. The devil, however, will be in the detail.

Plus, one other aspect of the card is indicated on the slide: yes, there's a reference cooler with blower design. As disappointing as this will be even to some of AMD's staunchest fans, hopefully the card operates no-where near its thermal limits and thus runs far more quietly than the reference cards of prior generations. 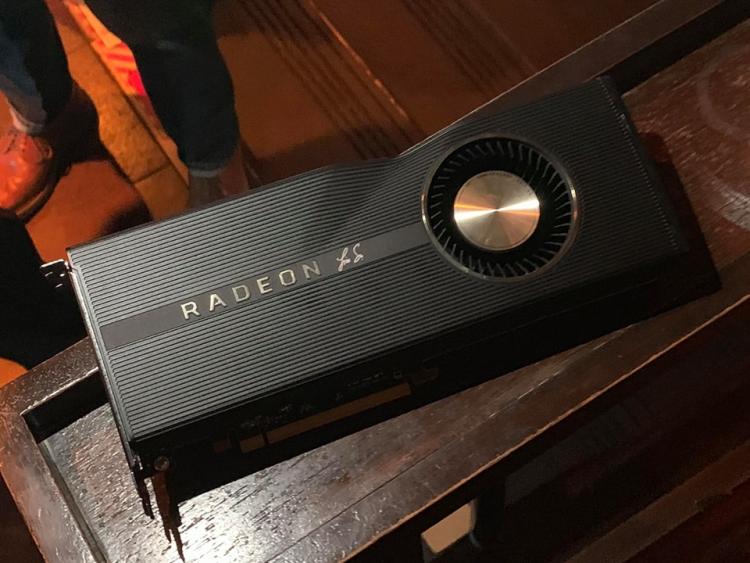 We'll be seeing far more of the new CPU and GPU this evening, alongside both feature and game reveals for the PC platform. Details can be found at amd.com/e3, and a VOD of the livestream will be available for those unable to tune in live.