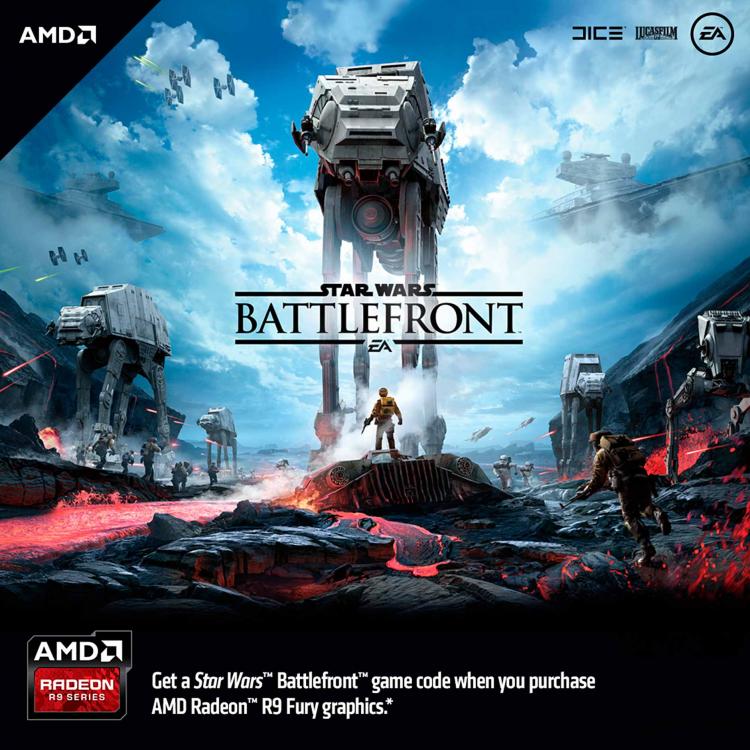 AMD have just confirmed that the Star Wars Battlefront bundle, wherein which you can claim a free copy of EA's blockbuster with every purchase of a new Radeon R9 Fury and Fury X GPU, has been substantially extended well beyond its original cut-off point. The offer now expires on March 31st, giving potential purchasers an additional two months to pick up either card and qualify for the free game.

To qualify either card can be bought on its own or as part of a brand new system, although only from participating retailers. Once purchased, customers who pick up the R9 Fury or Fury X have until April 30th to redeem their coupon code from http://www.amd4u.eu/starwarsbattlefront/. Additional terms and conditions, including a list of participating retailers, can be found at https://www.amd4u.com/amdrewards/

Further important news came down from on high this week regarding the pricing of the Radeon R9 Nano, the Red Team's tiny treasure for mini-ITX systems. At first priced to match the R9 Fury X, it was reported on Monday that the card's US retail price had been reduced to match the R9 Fury, i.e. closer to $499. That price reduction also appears to have migrated across the pond where an R9 Nano is now priced near identically to the R9 Fury (i.e. ~£415 inc. VAT). We've also seen isolated instances of reference R9 Nano cards below £400 this week, so keep your eyes open for 'Today Only' deals if you want to spot a special bargain.

The revision in pricing may partially be down to the increased number of Fury GPUs on the market with bespoke 3rd party cooling or perhaps slightly less constrained supply. Either way it's a nice boost for those speccing a very special small form factor system.

There are currently 765 user(s) online:
Google