At Computex 2019 this morning AMD CEO Dr. Lisa Su took to the stage to present their first Keynote Address. This couldn't be clearer as an indicator of a sea-change in momentum for the 'Red Team', and AMD rose to the occasion to unveil new CPUs and GPUs scheduled for availability in the coming months. But while the datacentre and graphics segments were highlighted, the real meat of announcements concerned next-gen Ryzen CPUs on the desktop.

We already knew that third generation Ryzen utilised the same brand new Zen 2 chiplet architecture as ROME, AMD's next-gen EPYC server and HEDT platform, but narrows the scope to fit within mainstream AM4 desktop PC sockets. Each chip is comprised of one big I/O die, and smaller dies with up to 8 CPU cores; during the Keynote Dr. Su confirmed that Ryzen would indeed have up to two of these 8-core chiplet dies on the CPU package. And of course they're shaping up to be the first desktop CPU range to support PCIe 4.0, unless Intel is able to throw a completely unexpected curve-ball in the next 6 weeks. 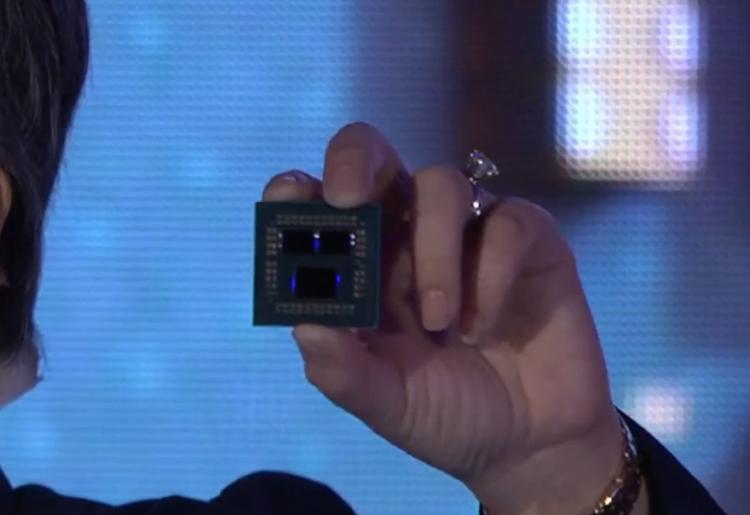 By splitting up the die AMD sidestep one of the key issues of single monolithic core designs: large die size, and hence high production cost. The I/O die can be manufactured using a 14nm process as these functions typically don't gain much by shrinking to a new node, whereas the 8-core chiplet dies are made using TSMC's cutting-edge 7nm process. They can then exploit the power efficiencies and frequency improvements of the new process.

Zen 2 is therefore a major change visually, but it's also a step improvement in terms of performance. Larger cache sizes contribute to an IPC improvement of ~15%, when 10% would have been excellent. Core clock speeds are higher (if not yet spectacularly so), but perf/watt is as much as 1.5x better. This means more performance, and more cores, within the same physical space and TDP envelope of Ryzen 2000-series chips.

Three models made it to the presentation and hogged the limelight.

AMD's chief rival for the Ryzen 7 3700X is Intel's Core i7-9700K, itself an 8-core part but without hyperthreading. We know that Ryzen's multi-core performance is going to be great, ~30% better if AMD are to be believed, but the major change is that the 3700X will be on par in single-threaded performance.

Intel's domination of the gaming space has been at least in part due to their single-core lead, so to see that cut to zero would be a huge boost to AMD's standing in real-world comparisons. To keep the TDP to within 65W is also excellent.

Ryzen 7 3800X is another 8-core, 16-thread part, but clocked a little higher than its sibling. This gives it a little more consistent performance, but like the endless debates of 2700 vs 2700X there's not a lot to tell between the two. A 105W TDP indicates that they're giving this SKU license to be a little more free with XFR and other dynamic performance enhancements, so this may be a case were the difference is obscured in parroting raw specifications.

This seemingly low disparity between the specifications of the 3700X and 3800X is just the sort of quirk that overclockers will be keen to exploit. If they can get on-par performance without spending quite so much, as occurred with the first generation Ryzen 7 1700, they'll jump on it with gusto.

Finally, and answering a question everyone was asking when the first Zen 2 AM4 CPU was teased at CES, we come to the 12-core Ryzen 9 3900X. This CPU features two 8-core chiplets (with two cores disabled per chiplet), and is the world first to offer twelve CPU cores outside of the HEDT arena.

If you were expecting appreciably lower clock speeds you're in for a surprise. The Ryzen 9 3900X comfortably outpaces the Turbo of the 3800X, and is only 100MHz lower in Base clocks. And with a second die to work with it has a total of 70MB Cache available. But most surprising is that AMD have kept the TDP within a 105W envelope.

So, why no 16-core / 32-thread part? It may be that all the good fully enable chiplets are winging their way into ROME workstation CPUs, or they're having difficultly getting under into the typical 105W TDP limit of their mainstream platform with 16 cores. By launching these chips later (as an Ryzen 9 3950X?), and potentially stipulating a more X570 robust power delivery system rather than offering guaranteed backwards compatibility, they undermine neither the CPU nor motherboard launch.

Smaller Ryzen 3 and Ryzen 5 CPUs were also not mentioned during the presentation. While members of these segments will no doubt be launched, their exact specifications are unknown at this time.

The Ryzen 3000-series starts at an MSRP of $329 for the Ryzen 7 3700X, identical to the 2700X last year and $45 less than the i7-9700K, and reaches $499 for the Ryzen 9 3900X. That's far more affordable than both Intel's 12-core HEDT chip (sitting at a little over $1K) and also less than the 12-core Threadripper 2920X (which launched at $629), but a little more than the Core i9-9900K. Detailed performance comparisons which that tease out architectural weaknesses will be fascinating to discover in reviews as we approach launch.

As for that launch, all three CPUs will be available on July 7th 2019. They will be partnered by a wide range of X570 motherboards from all AMD's partners, and after a BIOS update should be backwards-compatible with hundreds of older motherboards already in the hands of consumers.