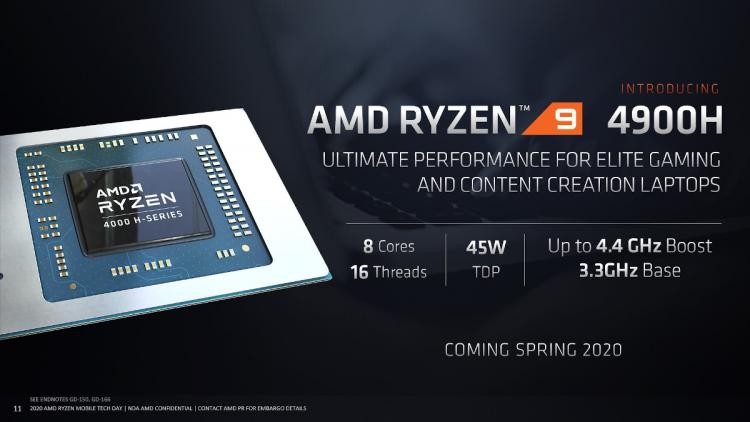 At CES 2020 AMD unveiled Ryzen 4000 Series Mobile Processors with Radeon Graphics, a new range of APUs with Zen 2 CPU microarchitecture and Radeon Vega graphics components that have been tailored to the demands of modern laptops and notebooks. During the presentation they revealed the presumed flagship model, the 8-core/16-thread Ryzen 7 4800H, but word has now been given that the true best of the bunch will be the Ryzen 9 4900H. These APUs will be at the heart of new mobile gaming laptops and notebooks launching in the coming weeks and months, and in some cases paired with additional discrete graphics hardware from AMD or NVIDIA.

Like their desktop cousins, 'Renoir' Zen 2-based mobile APUs are manufactured on TSMC's 7nm process, but the design calls for a monolithic (i.e. single processor die) rather than chiplet approach. Renoir also incorporates optimised Radeon Vega Compute Units (rather than Navi/RDNA CUs) on-die, pushing its graphics capability beyond that of prior APUs and, its presumed, making it a good match for gaming and workhorse business applications alike. Ryzen's 4000 U-series is binned for a TDP of up to 15W, 4000 H-Series sits within a 45W envelope, and the 4000-HS series variants have been selected for a TDP of 35W.

For their part AMD are confident that these 7nm APUs are more than a match for Coffee Lake and Ice Lake chips that make up Intel's 10th Generation lineup. They're being billed as a single family of chips 'without compromise', offering more cores, single-thread perf. and graphics clout than the competition.

AMD's new flagship APU takes advantage of the advanced binning process utilised throughout the Ryzen CPU range. Its underlying hardware specifications are similar to that of the Ryzen 7 4800H; it incorporates eight Zen 2 cores with SMT enabled to support up to 16 threads, but juices the frequency up to a base clock of 3.3GHz and boost clock of 4.4GHz. Cache remains the same, and actual computational performance will likely depend on the cooling solution of any notebook it is installed within.

On the other hand one significant difference is an increase in the number of active graphics compute units. The 4900H incorporates 8 Radeon Vega CUs, up from 7 in the 4800H and underscoring its positioning as a SKU more appropriate for gaming or GPU compute tasks. For good measure AMD have also increased the operating frequency of this graphics component to 1750MHz. 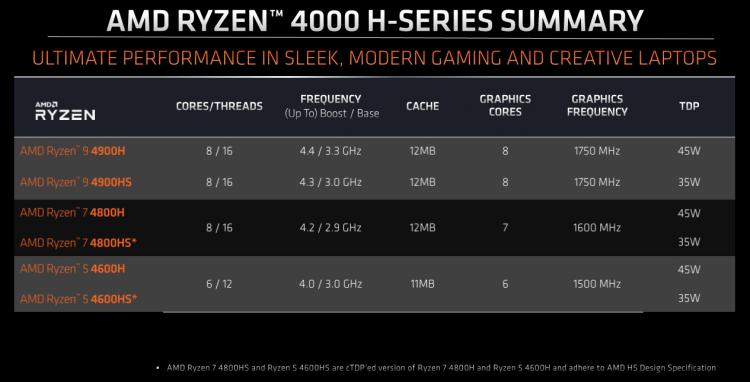 AMD are giving their manufacturing partners plenty of leeway with the 4900H by allowing a configurable TDP of between 35 and 54W. OEMs therefore won't need to substantially re-engineer cooling solutions found in prior notebook chassis to accommodate new flagship, and can instead tune the chip's dynamic overclocking function to remain within constraints imposed by these solutions. Details of the Ryzen 4000 H-series APU specifications can be found at https://www.amd.com/en/products/ryzen-processors-laptop.

At CES 2020 AMD demoed SmartShift, a means of dynamically distributing power between CPU and graphics components. With no input from the end-user SmartShift will funnel power (in increase performance) of the component most in need of it at any particular point in time, be it gaming, rendering or video editing. The technology is intended for notebooks equipped with both Ryzen processors and discrete Radeon RX graphics, and as such will be a relative rarity until such time that Radeon RX graphics increases in popularity within the market.

The Ryzen 9 4900H is billed as a multi-role processor for both gaming and true desktop replacement requirements, even if it currently labours under the 'gaming processor' moniker. It will often be paired with discrete graphics, as in the case of the ASUS Zephyrus G14 where high-end variants designs come equipped with NVIDIA's GeForce RTX 2060 Max-Q. In this configuration its gaming chops are significant even in the more power-limited Ryzen 9 4900HS aspect, maintaining FPS averages above the 60fps sweet spot. 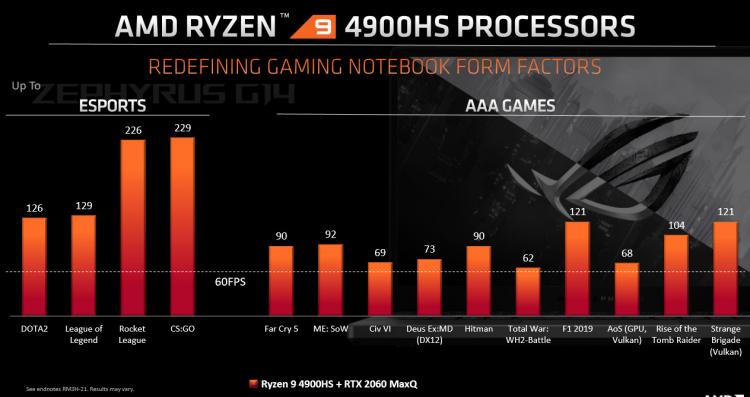 Ultrathin notebooks with just the Ryzen 9 4900H/4900HS and no discrete graphics are likely to follow once demand for AMDs new platform has been proven. Notebooks configured in this manner will be reliant on the stability and feature set of Radeon Software Adrenalin 2020 Edition drivers and software, a package which is now centrally available rather than subject to the qualification and release schedule of OEMs.

Laptops equipped with AMD's Ryzen 4000H-series APUs are expected to be available to pre-order from today. Shipping will begin in Spring 2020, but this is subject to change due to the impact of coronavirus COVID-19 on supply chains and Western retailers.