The 2nd-Generation A-Series APU, codenamed "Trinity", is a grounds-up improved design over the previous generation, enabling a best-in-class PC mobility, entertainment, and gaming experience. New features of the product design include:

- Double the performance per watt of the previous generation;
- The AMD HD Media Accelerator with a unique set of technologies designed to optimize video quality available with premium and Internet video content, and accelerate video file conversion;
- An increase in CPU performance of up to 29 percent with higher processor speeds thanks to the next-generation AMD "Piledriver" CPU core with 3rd-Generation AMD Turbo Core technology, where power is dynamically shifted between the CPU and GPU depending on application needs, effectively providing a more responsive experience that can boost CPU frequencies to up to 3.2 GHz;
- AMD Radeon HD 7000 Series graphics for an increase of graphics performance up to 56% over the previous generation. Combined, the CPU and GPU cores deliver more than 700 gigaflops of computing performance - several times more than the fastest x86 CPUs - to boost performance of hundreds of applications;
- Up to 12 hours of battery life through CPU and GPU power enhancements, with clear battery life leadership in notebook form factors. 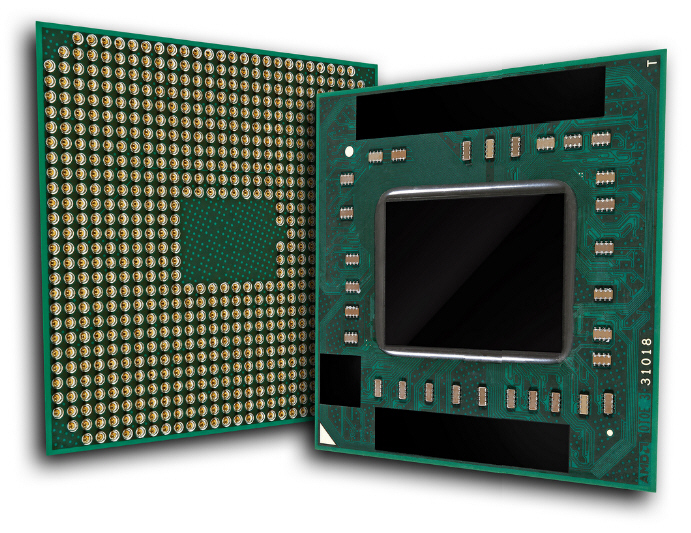 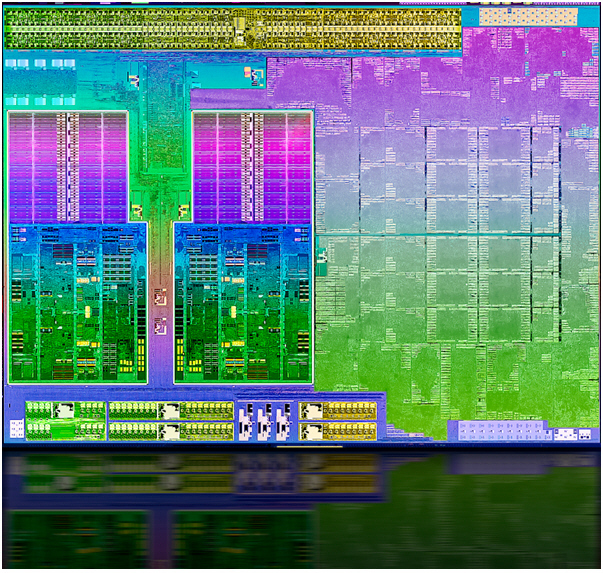 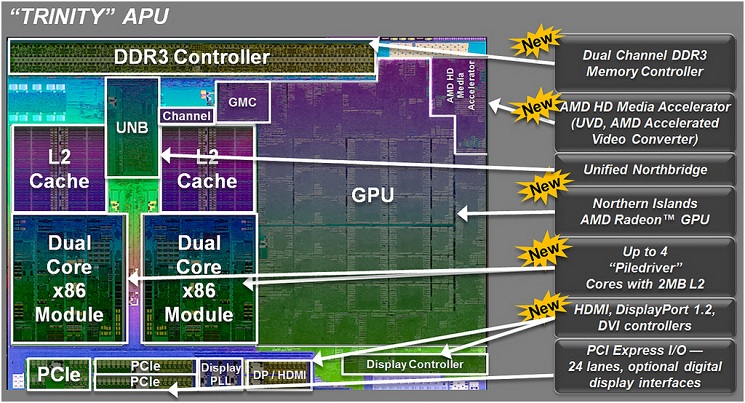 "The latest OEM notebooks, ultrathins, All-in-Ones and desktops based on the new AMD A-Series APU enable the best video and gaming experiences, highly responsive performance with AMD Turbo CORE, and accelerate an ever-increasing range of productivity and multimedia applications -- in sleek, stylish designs at price points that make sense," said Chris Cloran, corporate vice president and General Manager, AMD Client Business Unit. "Our 2nd-Generation AMD A-Series APU is a major step forward in every performance and power dimension, allowing users to enjoy a stunning experience without having to give up the things that matter to them most. This experience doesn't stop at mainstream notebooks. It carries over into affordable ultrathin form factors featuring the latest in AMD Radeon graphics."

The Growing AMD Accelerated Application Ecosystem
The developer ecosystem continues to gravitate to the unmatched level of compute and unique processing capabilities of the APU as more than 100 applications and games are now accelerated by AMD APUs. The 2nd-Generation AMD A-Series APU gives users superior Web-based video experience thanks to plug-ins for Google Chrome, Firefox and Internet Explorer 9 that make it easy for consumers to turn on AMD Steady Video technology. Recent applications that have been optimized for use on AMD A-Series APUs include Adobe Photoshop CS6, WinZip 16.5 and VLC Media Player. AMD A-Series APUs are also well-positioned to take advantage of the upcoming transition to the Windows 8 operating system.

"We are excited for the introduction of the 2nd-Generation AMD A-Series APU and are confident it will continue the great work Microsoft and AMD have done together on the A-Series APU," said Aidan Marcuss, senior director, Windows Business Planning, Microsoft Corp. "We look forward to seeing the A-Series APU in action with Windows 8 to deliver a great user experience across a variety of hardware."

For developers who want to engage in the industry's move toward heterogeneous computing, the upcoming AMD Fusion Developer Summit will offer them a unique opportunity to enhance their knowledge base. More information on AFDS can be found here.

Unmatched Mobility
With more than 12 hours of 'resting' battery life, AMD is now an industry leader in notebook battery-life performance. The 2nd-Generation AMD A-Series APU delivers increased levels of performance, while consuming half the power as its predecessor.

These gains can be attributed to the new power-optimized "Piledriver" CPU core, as well as to AMD Start Now technology, which is designed to maximize system responsiveness by quickly entering and exiting low power states. With AMD Start Now, the computer resumes from sleep mode in as few as two seconds and boots to the desktop in as few as 10 seconds.

In ultrathin form factors, AMD enables an uncompromised visual experience thanks to a power-efficient and premium AMD Radeon graphics engine. Consumers can expect to see ultrathin notebooks based on dual-core 17-watt and quad-core 25-watt AMD A-Series APUs. These products will be easily identifiable by aluminum-styled VISION Technology stickers at a range of competitive price points.

Best-in-class Entertainment
As more and more people turn to their computers as the hub for their entertainment, the visual aspect of computing becomes ever more important. To enhance these capabilities, AMD created the AMD HD Media Accelerator - a unique set of technologies that enable the best video quality on a PC. Key features of the HD Media Accelerator include:

Gaming Leadership
The 2nd-Generation AMD A-Series APU builds on AMD's legacy of gaming leadership with an increase in graphics performance of up to 56% over the previous generation and support for:

- AMD Eyefinity Technology - For the first time, this immersive technology is available from an APU without the need for a discrete graphics card;
- Performance-leading DirectX 11 graphics architecture and 1080p gaming a life-like level of detail;
- AMD Radeon dual graphics support that delivers a performance boost of up to 75 percent when adding a discrete graphics card to the APU. The AMD Radeon dual graphics option also offers support for DirectX 9 for older game titles, and uses new AMD CrossFire Technology Profiles for easier updates.

Availability and Technical Details
AMD has a record number of design wins with companies like Acer, Asus, HP, Lenovo, Samsung, Sony and Toshiba based on our 2nd-Generation AMD A-Series APUs and VISION Technology from AMD, with mainstream and ultrathin notebooks as well as embedded solutions, available beginning today. 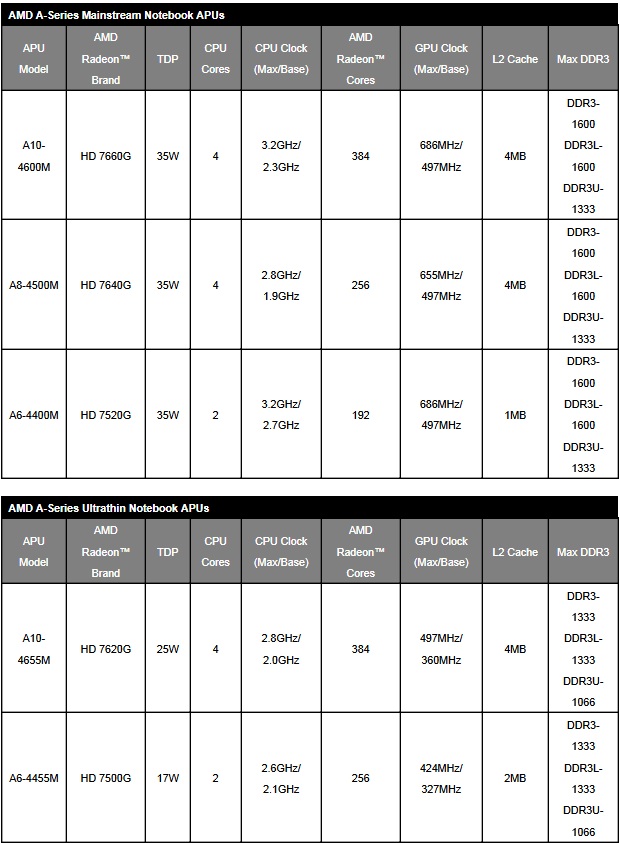 Desktops systems and component channel parts will be available later this year.