With much of the AMD-centric discussion in recent months centred around APUs and GPUs, their desktop CPU range has been taking something of a step back from the spotlight. That's hardly surprising: Bulldozer was not generally well received and few changes have been made to the line-up whilst work continues apace with Piledriver on upcoming Trinity and Viscera products. We therefore approach AMD reducing the in-tray pricing for FX-series CPUs and A-series Llano APUs with some relief (and perhaps a little trepidation).

FX-Series CPUs from the FX-8150 to the FX-4100 are being discounted by as much as $20 on their tray pricing, representing in some cases a 15% price cut. Many will see this as a much-needed development for the competitiveness of the aging AMD AM3+ platform in the post-IvyBridge world as we move towards the all-important late-October Windows 8 release date, but it's not entirely clear that this will be enough. Hardware.info also report a reduction in PhenomII Black Edition CPUs all the way to the high-end hexacore X6-1150T BE, though with the exception of two key quad-core variants these reductions are unlikely to be large enough have an impact on the desktop market. 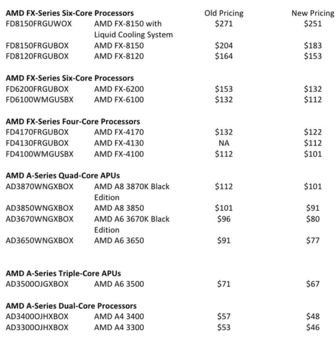 AMD A-series APUs reduced in price include high-end quad-core Llano A8-3870K's, through to affordable A4-3000's. By contrast to Bulldozer, Llano's have been well received and the change will make creating a HTPC not bound to the whims of app developers enabling hardware decoding support all the more possible. Trinity APUs however are not touched, with many consumers wondering openly about a lack of availability.

As mentioned, the new pricing coincides with the release of the FX-4130. Gary Silcott, Senior Manager for Client Product PR, announced on the AMD blog that the new AM3+ CPU will still be based on 32nm Bulldozer architecture, though unlike the FX-4100 and FX-4170 will only feature 4MB L3 cache. To make up for this relative loss in performance, clock speeds increase to 3.8GHz base/3.9GHz in Turbo Mode, coming at the price of a 125W TDP.