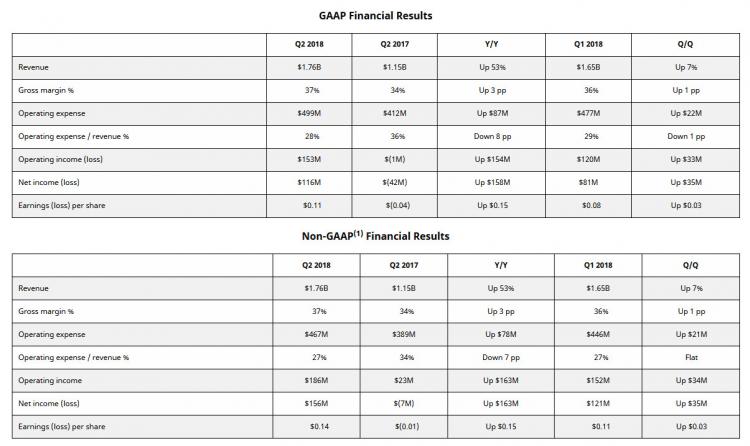 We had an outstanding second quarter with strong revenue growth, margin expansion and our highest quarterly net income in seven years, said Dr. Lisa Su, AMD president and CEO. Most importantly, we believe our long-term technology bets position us very well for the future. We are confident that with the continued execution of our product roadmaps, we are on an excellent trajectory to drive market share gains and profitable growth.

Enterprise, Embedded and Semi-Custom segment revenue was $670 million, up 37 percent year-over-year and 26 percent quarter-over-quarter primarily due to higher semi-custom and server revenue.

All Other operating loss was $33 million compared with operating losses of $24 million a year ago and $32 million in the prior quarter.

At Computex 2018, AMD showcased the next-generation of leadership CPU and GPU products including the first public demonstrations of:
- The 12nm Zen+-based 2nd Generation Ryzen ThreadripperTM CPU, featuring an industry-leading 32-cores and 64-threads of HEDT computing power, scheduled to launch in Q3 2018.
- The 7nm Radeon Vega architecture-based GPU for servers and workstations that is planned to launch later in 2018.

For the third quarter of 2018, AMD expects revenue to be approximately $1.7 billion, plus or minus $50 million, an increase of approximately 7 percent year-over-year, and non-GAAP gross margin to increase to approximately 38 percent, driven by the sales growth of Ryzen and EPYC products, partially offset by lower sales of GPU products in the blockchain market.

There are currently 155 user(s) online:
Google