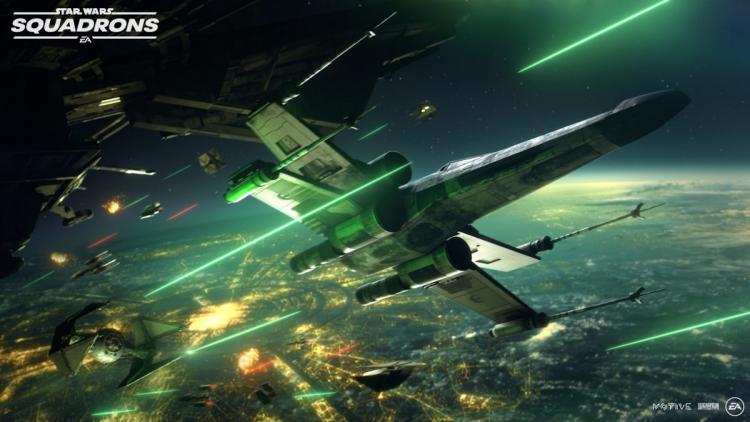 Hot on the heels of NVIDIA's latest driver release comes AMD's Radeon Software Adrenalin 2020 Edition 20.9.2, an update for Radeon graphics hardware. Very much a 'nuts and bolts' revision to the driver stack, RSAE 20.9.2 prioritises fixed issues and support for Vulkan over new consumer features, but also addresses the expected stability for this week's biggest videogame launch.

On October 2nd EA will release Star Wars: Squadrons, the latest title springing from Disney's gargantuan IP and first in a long while in the first-person spaceship combat genre. In common with all first-person titles, performance - that is to say smooth and high average framerates - will be critical to the experience of players, and AMD aim to meet their needs on PCs with AMD Radeon graphics hardware as soon as the load up the game for the first time.

The second highlighted aspect of this driver launch is support for new Vulkan API extensions VK_KHR_buffer_device_address, VK_EXT_robustness2 and VK_EXT_shader_image_atomic_int64. Although chiefly a developer feature, they will no-doubt be important to consumers for future games developed with Vulkan.

Finally, the new drivers incorporate 13 headline fixes to issues identified in the previous driver(s), as well as identifying a selection of problems next on the chopping block. In particular, the expected launch of World of Warcraft's Pre-Expansion Patch (9.0) in the coming weeks, with a concurrent increase to its active player counts, put a fix to corruption when using a DX12 render mode all the more time-sensitive.

Although any and all improvements are welcome, the sheer number of instability reports made by users strongly suggests that AMD are fighting an up-hill battle with the RSAE 2020 package as a whole.

These drivers are compatible with 64-bit versions of Windows 7 and 10, and support Radeon GPUs as far back as the HD 7000-series (GCN 1.0). Download them from amd.com/support or via the Radeon ReLive desktop app.

VK_KHR_buffer_device_address
- This extension is used to query the device address of a buffer to allow for shader access to that buffers storage via the SPV_KHR_physical_storage_buffer SPIRV extension.
VK_EXT_robustness2
- This extension provides stricter restrictions for handling reads and writes that are out of bounds. It specifies that out-of-bounds reads must return zeros and out-of-bounds writes must be discarded. This extension also adds support for null descriptors.
VK_EXT_shader_image_atomic_int64
- This extension extends existing 64-bit integer atomic support to images, which provides more efficient access than buffers. This allows applications to quickly improve their performance with minor changes to their code.

- Some games may exhibit stutter intermittently during gameplay on Radeon RX 5000 series graphics products.
- Radeon FreeSync may fail to enable after updating Radeon Software without a system reboot.
- Screen flickering may be observed while MSI Afterburner is running or enabled on the system.
- X-Plane 11 may experience an application hang or crash when using the Vulkan® API.
- DOOM VFR may experience corruption or artifacting in game on Radeon RX 5000 series system configurations.
- Performance metrics overlay may fail to open or appear after the system wakes from sleep.
- Call of Duty®: WWII may experience black textures on the ground or walls in zombies game mode.
- Blocky corruption may be observed in Detroit: Become Human on some Radeon RX 5000 series graphics products.
- Using the Movies&TV application to edit video clips may result in green corruption in the clips.
- Performance metrics may report incorrect values for current VRAM usage after an extended period of gameplay.
- With HDR enabled, Windows® desktop may experience flickering, and performing a task switch while in a game may cause colors to become washed out or over saturated.
- World of Warcraft may experience corruption issues with anti-aliasing enabled on DirectX®12 API.
- Launching Radeon Software after a driver upgrade, may cause the Auto OC dialogue to appear with 0 Mhz when the Auto OC feature has been previously enabled on Radeon RX Vega series graphics products.

- Enhanced Sync may cause a black screen to occur when enabled on some games and system configurations. Any users who may be experiencing issues with Enhanced Sync enabled should disable it as a temporary workaround.
- Performance Metrics Overlay and the Performance Tuning tab incorrectly report higher than expected idle clock speeds on Radeon RX 5700 series graphics products. Performance and power consumption are not impacted by this incorrect reporting.
- Audio may experience instability when connected through an Audio Video Receiver via HDMI® on Radeon RX 5000 series graphics products.
- Modifying the HDMI Scaling slider may cause FPS to become locked to 30.