AMD have been pushing their #2betterthan1 media campaign for a little while now, teasing an upcoming release through various media outlets and via social media. Associated with this campaign has been the project codename Vesuvius, perhaps indicating come relationship with the R9-200 AKA Volcano Islands series of GPUs. At the end of last week they took to twitter to post the above image, indicating that we'll see more information this soon.

Meanwhile WCCFTech.com has reported a few more speculative details from anonymous sources, stating that the product teased will be revealed some time in the first two weeks of April, with some importance being allocated to the 8th. Furthermore, as we mentioned two weeks ago, the card should be the Radeon R9 295X2.

Not a great deal is known about the aforementioned card, but there are a few relevant pieces of information we can glean from the information presented thus far. First off it's likely to be dual-GPU design similar to the HD7990 and HD6990 of yesteryear, only in this case featuring two Hawaii-type GPUs. Furthermore hints from the marketing materials indicate that in order to cool this beast it will probably feature a hybrid cooler design, combining both a radial fan and closed loop liquid cooler in an arrangement similar to the ASUS ARES II. Finally the clock speeds are expected to be on the order of 1GHz. 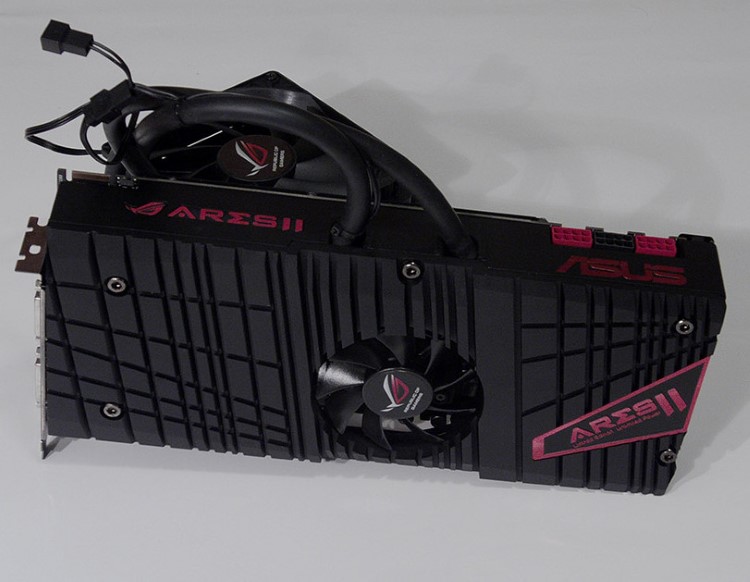 It wouldn't be the first time AMD have dabbled with closed loop liquid coolers - certain SKUs of the unlocked FX 8350 CPU, based on the Bulldozer architecture, came with a Liquid Cooling System based around a 120mm radiator in order to keep its temperatures under control. Third parties have also taken advantage of such coolers or other hybrid designs, for example ASUS Poseidon, but this would be the first reference SKU from either AMD or NVIDIA to make use of such a system. Whilst not particularly attractive or elegant, it will hopefully be quieter and more efficient than previous AMD Radeon cooling designs.

Even given the above a proverbial horse and cart can be driven through what we don't know. Most important is the type of Hawaii GPU used, either the Hawaii Pro of the R9 290 or Hawaii XT included in every R9 290X, or potentially a combination of the two as some reports from CeBIT indicated. Four gigabytes of video RAM per core (for a total of 8) would be the minimum to expect, but we shouldn't discount the possibility they move to 8GB to compete with the TITAN-Z. The size of the cooling solution is also up in the air; dual-GPU cards tend to be both extremely long and tall to accommodate both GPU heatsinks and the components themselves, whereas in theory AMD's hybrid design could be more compact.

Of course, there's also price to consider. It's highly unlikely that the R9 295X2 will even come close to rivalling the eyewatering $3000 price tag of the GTX TITAN-Z but double the MSRP of an R9 290X wouldn't be unexpected. Current UK pricing would put it at a retail price of £850-950, but that's probably going too far down speculation rather than reasoned enquiry.

The announcement by NVIDIA of the GTX TITAN-Z, and the possibility of a derivative dual-GPU variant of the GTX 780/780Ti, will have taken some of the wind out of AMD's sails. It's now up to them to deliver something which both amazes and can actually be purchased, unlike some previous boutique lines.

There are currently 631 user(s) online:
Google