A recent slide that appears to be from an AMD internal presentation shows some key figures for the AMD Antilles GPU, to be named Radeon HD 6990. This is AMD's upcoming flagship dual-GPU card, currently expected to be released Q1 2011. 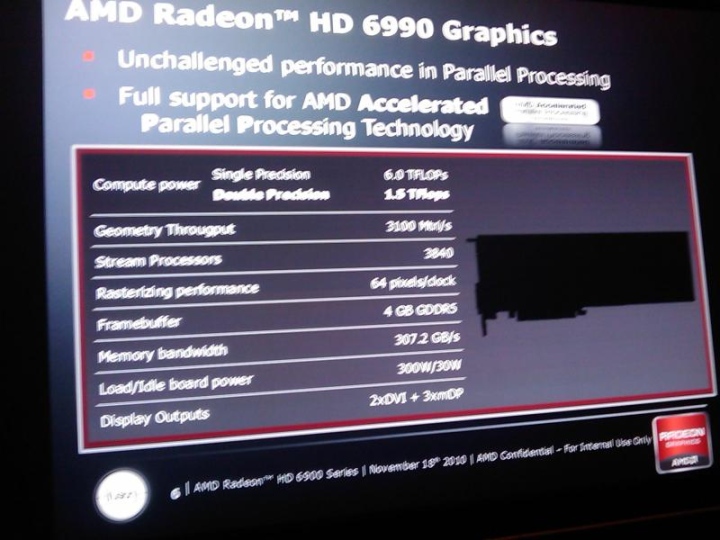 The main tech specs shown for the AMD Radeon HD 6990 are:

Therefore, knowing already that the AMD Radeon HD 6990 is to feature two Cayman GPUs to achieve these numbers, it can be postulated that the specifications of the Radeon HD 6970 should be as follows:

This may confirm the thoughts that the Radeon HD 6970 is to feature 2GB of VRAM, that's 512MB more than it's main rival, the NVIDIA GTX 580.

How does this compare to the GTX 580? Bearing in mind that the architectures are quite different and that the final performance isn't governed absolutely by these numbers, we can attempt to compare somewhat. Based on linear scaling of the stream processors of the HD 6870, we could deduce that the HD 6970 would need just over 1500 stream processors to level with the GTX 580, though we are comparing different architectures, so the validity of this statement is very questionable. Based on memory bandwidth, the GTX 580 offers around 192 GB/s, whereas it appears the HD 6970 will offer around 160 GB/s, but it does have more total memory. We'll have to wait for some more performance figures to really know where it sits amongst this barrage of technical details.

For even more technical information on the Cayman GPU architecture, these slides emerged today also, showing detailed diagrams on the GPU layout and function, courtesy of NGOHQ.org.