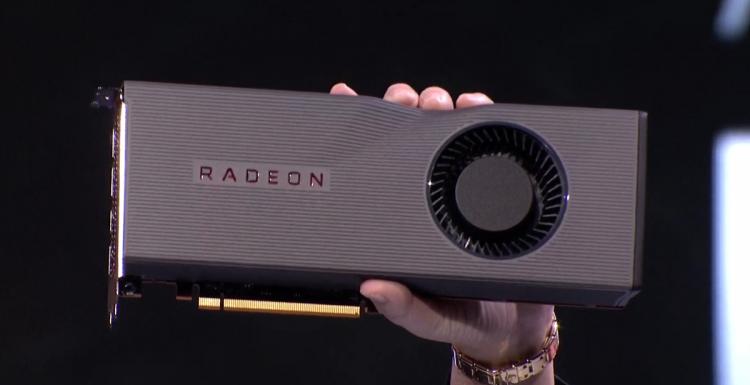 After an extended tease during Computex 2019 the audience was primed for juicy details of new graphics cards based on AMD's Navi microarchitecture, and now that we've rolled around to E3 2019 Dr. Lisa Su was more than happy to provide. This week AMD are finally taking the wraps off the Radeon RX 5700-series, two new cards which will debut on July 7th to compete against NVIDIA's mid-range RTX 20-series GPUs.

Radeon RX 5700-series graphics cards are monolithic GPU designs manufactured on TSMC's 7nm process, significantly improving both power efficiency and maximum supported frequency compared to AMD's previous generation (both Polaris RX 500-series and Vega). The Graphics Core Next architectural family has been superseded by RadeonDNA (stylised 'RDNA'), which rolls in an array of improvements to the core and architecture that have only been briefly touched upon. Alone, this generational leap is responsible for ~25% higher IPC.

Two Radeon RX 5700-series models will launch on July 7th: the Radeon RX 5700, and Radeon RX 5700 XT. It marks a return for the 'XT' performance branding last seen when AMD's graphics division was still an independent entity known as ATI, and is a call-back to that heritage. As for the skip to 5000 from 500 - well, we can put that down to it being AMD's 50th birthday this year. 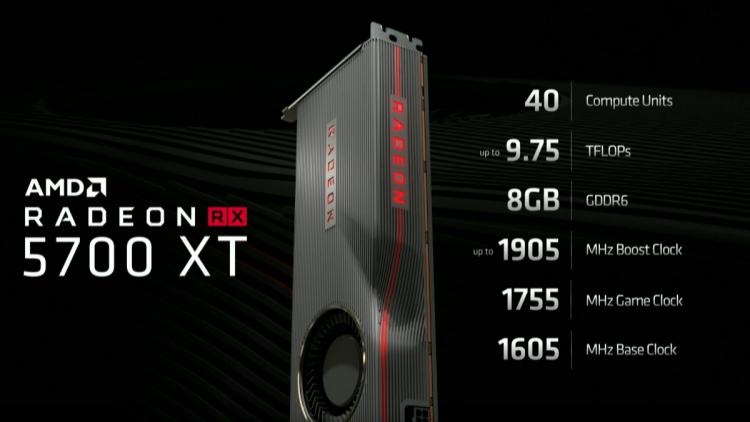 First up is the flagship Radeon RX 5700 XT. A 40 Compute Unit SKU, it clocks up to 1.9 GHz and features 8GB of GDDR6 memory. In these respects it seems an in-line upgrade over the Radeon RX 580 (itself a 36 Compute Unit part), but a new architectural family and vast gulf in price make direct comparisons unhelpful. We'll know more when AMD release an architectural 'deep dive' of RDNA, likely to coincide with the card's launch next month.

The RX 5700 XT goes head to head with NVIDIA's RTX 2070, and AMD were more than keen to show off benchmark results comparing the two. However, not all is at it seems in these results as they compare 'best with best'; DX11, DX12 and Vulkan rendering APIs are tested where available on each card and in each game, and only the best FPS result is presented here. That could be seen as being a little disingenuous, so as always independent reviews are going to be absolutely necessary prior to launch. 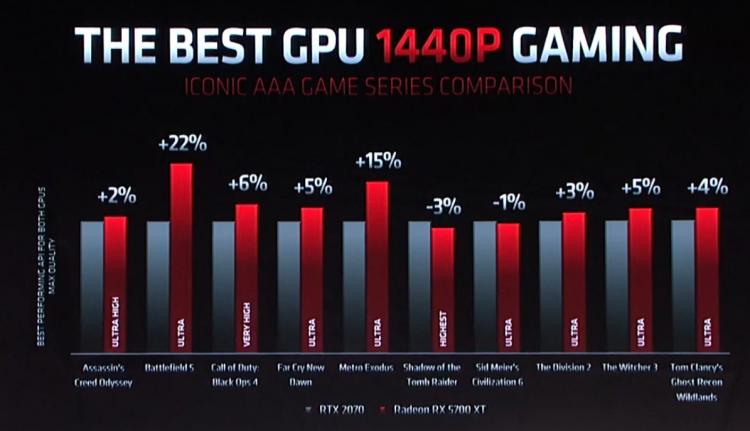 In the results presented the RX 5700 XT trades blows with the RTX 2070, surpassing in some, falling behind a little in others. Drivers are likely to change the picture a little but the overall impression AMD clearly want to give is that there's not much difference between these two cards from a pure performance perspective.

There is a difference in the price however: the RTX 5700 XT is to be sold for an MSRP of $449, ~$50 less than the current cheapest Newegg price of NVIDIA's RTX 2070. So the gauntlet is thrown down - are GeForce RTX technologies (real-time hybrid raytracing, DLSS etc.) worth the $50 over whatever new rendering technologies AMD brings to the table this summer. 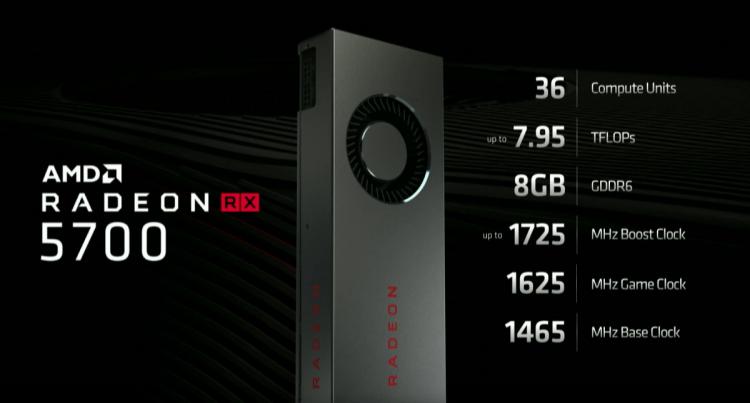 The picture's a little different with the Radeon RX 5700. It's slimmed down from the RX 5700 XT, boasting four fewer Compute Units and lower operating frequency bands, and is designed to aggressively compete with the RTX 2060. But they're not on an even footing; RX 5700 is launching at $379, whereas the RTX 2060 is available for as low as $330 (as well as supporting GeForce RTX technologies).

Somewhat strangely, AMD focussed on comparisons in so-called e-sports games, i.e. competitive games often streamed and run in tournaments operating at very high frame rates. Typically however these have been the province of more affordable <$300 products segments, which neither the RX 5700 nor RTX 2060 occupy. The reason for this focus becomes clear when they introduce a surprise AMD-exclusive technology, but we'll get to that. 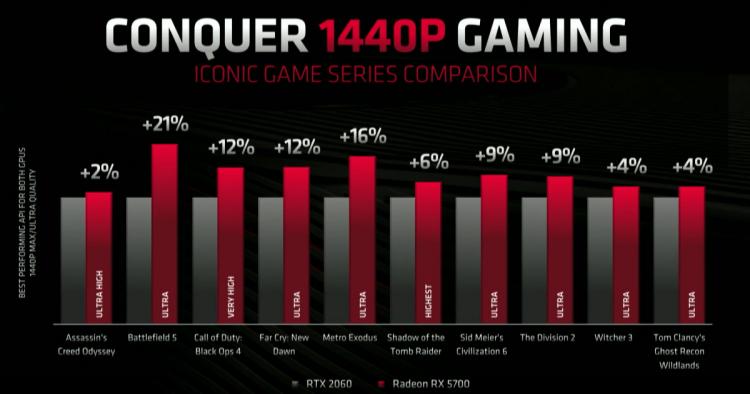 Once again they're comparing 'best with best' here, and while it's a clear win for AMD at 1440p a much wider selection of results with more detailed analysis and transparent methodology really is going to be required before any purchasing advice can be levelled. It's also worth noting that there's no mention of older Vega GPU performance which could be particularly atttractive given recent price reductions.

Debuting alongside the RX 5700-series is a new reference blower cooler optimised for the new GPU. Blower designs utilise a radial fan running at high RPM to push air along the length of the card, and the cooler shroud directs the hot air straight out the case rear through a ventilated PCI bracket. They have a reputation for being loud and inefficient compared to axial designs, but are also seen as more suitable for situations where internal case air flow is poor and CPU cooler quality is sub-standard. 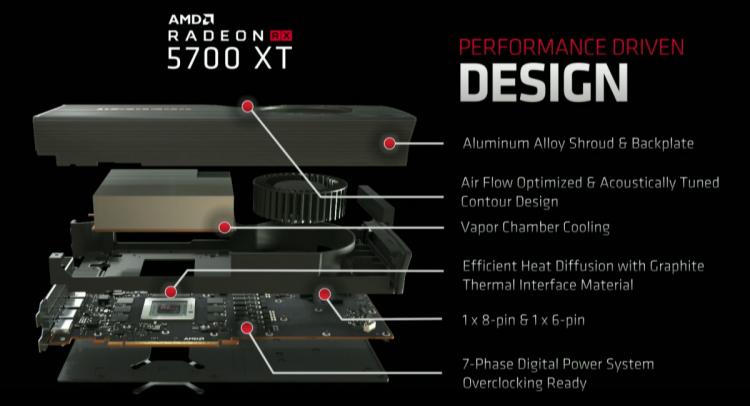 Outwardly the new blower design recalls that of the R9 290/290X in shape rather than the RX 480, but incorporates important tweaks to improve aesthetics and performance. The shroud is an aluminium alloy that's shaped to improve air flow and reduce acoustic footprint. Air is pushed through a dense vapour chamber that cools the GPU die directly, while memory and other surface components are cooled by a large heatspreading plate. Graphite TIM has been used for improved thermal transfer efficiency. Hopefully these all add up to a sea-change in outcome.

Expect plenty of attention to be given to AMD's latest reference cooler in launch reviews. It's been a weak link in their reference designs down the years, undermining other promising GPUs that proved to be far more compelling options with 3rd party partner cooling. AMD and their partners haven't revealed how long consumers will wait before 3rd party RX 5700's become available, but prior generations have been delayed by as much as 3 months.

Announced alongside the new GPU series were a set of software tools that allow developers to better leverage the architectural features available in AMD GPUs, augmenting their current ecosystem and released as part of the OpenGPU initiative. 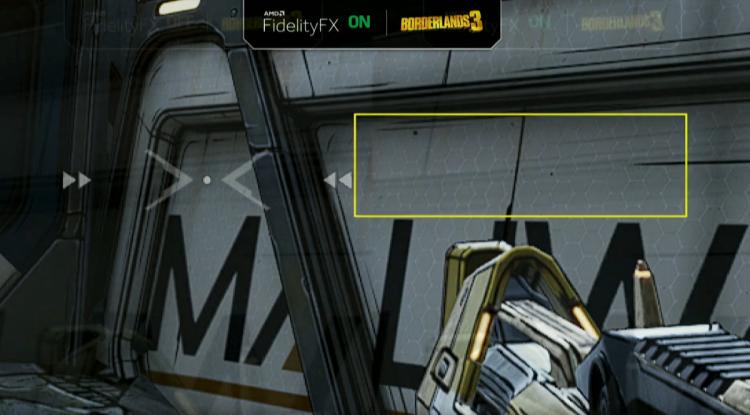 With FidelityFX, subtle texture features often dulled by rendering optimisation features are no longer lost as a blurry mess.

At a surface level, FidelityFX is a post-processing technique which improves visual fidelity and texture detail in areas with low contrast. Examples showcased a sharpening effect on wear patterns on rendered tyres, or mesh patterns on walls which would otherwise be relatively blurry (particularly after aggressive anti-aliasing techniques).

The technology in part leverages Rapid Packed Math, an architectural feature of RDNA with its genesis in Vega, and is implemented on a game engine level. Borderlands 3 and Gears of War 5 both plan to use the tech on or soon after release, and it may also be supported on next-generation consoles scheduled for late 2020. The Unity game engine is also expected to roll in the technology in an upcoming update.

Games without FidelityFX will instead be able to utilise AMD Image Sharpening, a game-agnostic tool that uses similar techniques to sharpen textures. These tools are likely to become all the more important as display panel technology improves, we transition to HDR in the mainstream consumer space, and frame rate expectations increase. The performance impact of these tools is expected to be on the order of 2%. 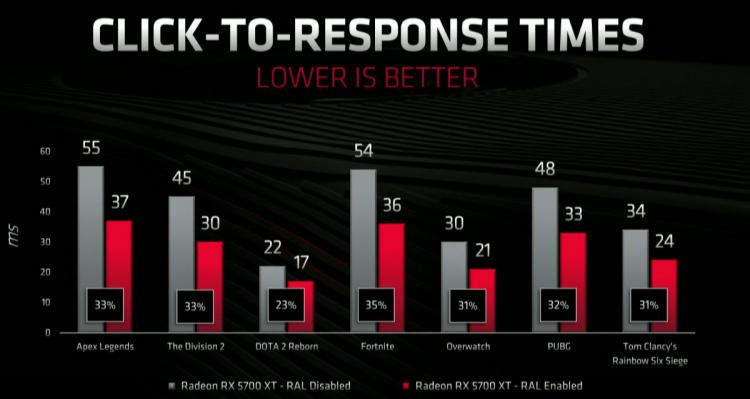 Radeon Anti-Lag by contrast is a tool squarely intended for competitive gaming. It specifically addresses 'Motion to Photon' latency, i.e. the time between moving your mouse and that being reflected on-screen, which is typically in the range of 4 frames of lag. AMD claim it could reduce this form of lag by as much as 35% or 1 to 2 frames, measured in the tens of milliseconds.

AMD are usually excellent when it comes to percolating improvements down to older architectures if at all possible, so it may well be that existing red team members (particularly RX Vega56/Vega64 owners) will also be seeing a knock-on benefit in the near future.

AMD Image Sharpening - Less powerful alternative to FidelityFX for use when a game has not be updated to support the technology natively.

Radeon Anti-Lag - Tool to reduce 'Motion to Photon' lag in competitive games by as much as 35%.