It's certainly been some time since AMD Radeon released a new graphics card, but that's perhaps unsurprising given the recent focus on CPUs and gearing up for 7nm in 2019. However for a little while there have been rumours of a refresh of the Polaris range of GPUs (its 2nd refresh, for those counting at home), potentially to take advantage of more mature manufacturing processes. This morning more evidence surfaced: a 3DMark Time Spy database entry for an 'RX 590'.

A screenshot of the entry itself was posted on Twitter and Reddit by user TUM_APISAK, and follows the sighting of a manufacturer listing for an HIS RX 590 late last week. It's noteworthy in one other aspect - the core clock speed is identified as 1545 MHz, a little over 200MHz higher than the reference clock speed of the RX 580, and 120MHz more than the PowerColor Red Devil Golden Sample RX 580 we reviewed in April 2017. 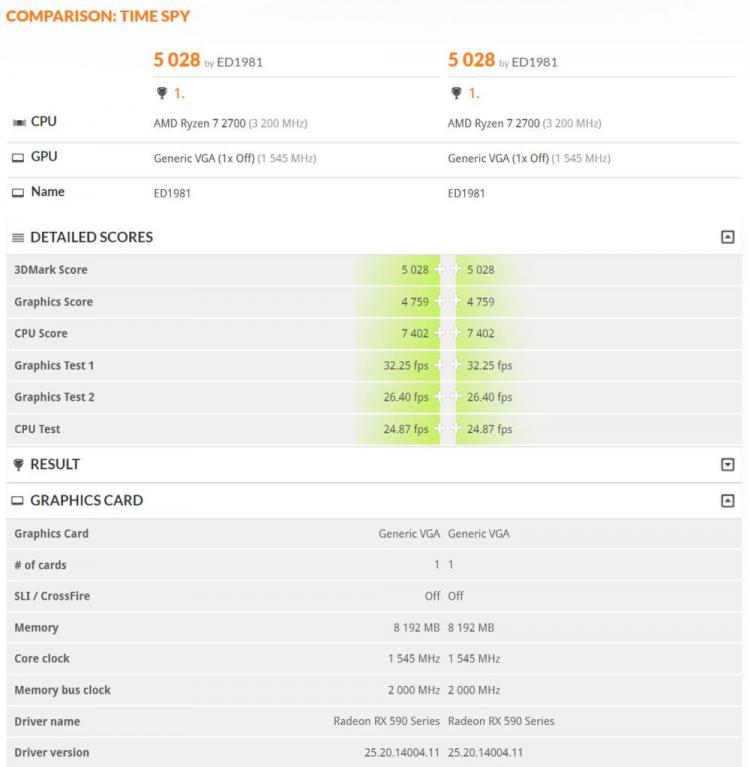 While GPU core frequency has increased, memory bus clocks remain at 2000MHz and indicate that the card continues to use the more affordable 8GB of GDDR5 VRAM rather than GDDR5X/6. It's impossible to discern additional changes from the specs listed and results shown. It should be noted that if this SKU is a refresh of the RX 580 then its unlikely to be sold in 'reference' form with AMD blower cooler. Partner board manufacturers would already be in place to use their own proprietary cooling solutions and non-reference PCBs.

If these are indeed the new reference - or even factory overclocked - specifications of an RX 590, it could mean that the GPU has transitioned to the newer 12nm lithographic process, rather than 14nm process previous Polaris 20 GPUs were manufactured with. If so, better clock speeds and lower voltages should be the order of the day.

As with all rumours it's best to take this with a pinch of salt. AMD would certainly like to enter the holiday season with a new product range offering better performance at their given price points, but it remains to be seen whether they (and consumers at large) have an appetite for another refresh of Polaris on desktop.