The AMD APP SDK helps developers quickly and easily tap into the power of GPU compute and parallel processing in heterogeneous computing platforms, building on the OpenCL industry standard to help developers reach a broader market by writing applications that run on a variety of device form factors.

Improving performance and programmability on AMD platforms is a key initiative for us, and we work closely with developers to help us make the APU the best possible development platform, said Manju Hegde, corporate vice president, AMD Fusion Experience Program. With these latest SDK refinements, we are supporting continued growth of the ecosystem and building on the momentum generated by the successful AMD Fusion Developer Summit held in June of this year.

With the introduction of the AMD A-Series APUs and these new enhancements to the SDK, AMD is removing hardware barriers and reducing coding complexity to help developers build immersive computing experiences, said Graham Brown, chief technology officer, Corel Corporation. Leveraging open standards, AMD has created a comprehensive platform developers can use to deploy all available compute power and deliver a significantly enhanced experience to multimedia consumers. 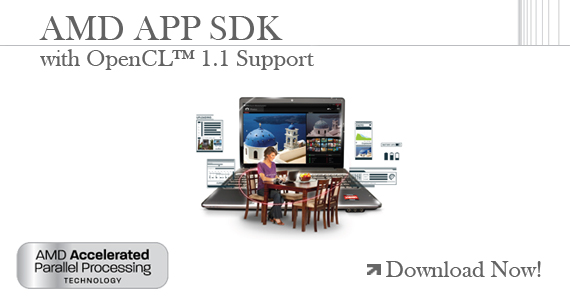 Other features of the AMD APP SDK v2.5 include enhancements to the OpenCL runtime designed to enable more efficient use of available GPU compute capabilities by reducing kernel launch times and PCIe transfer overheads.

The AMD APP SDK is being used by developers who have entered the AMD OpenCL Coding Competition, being run by software development leader TopCoder. This contest, which was announced in June at the AMD Fusion Developer Summit, is open to software developers worldwide, and up to $50,000 in prizes will be awarded to winning submissions. For more information, visit http://amd.topcoder.com.