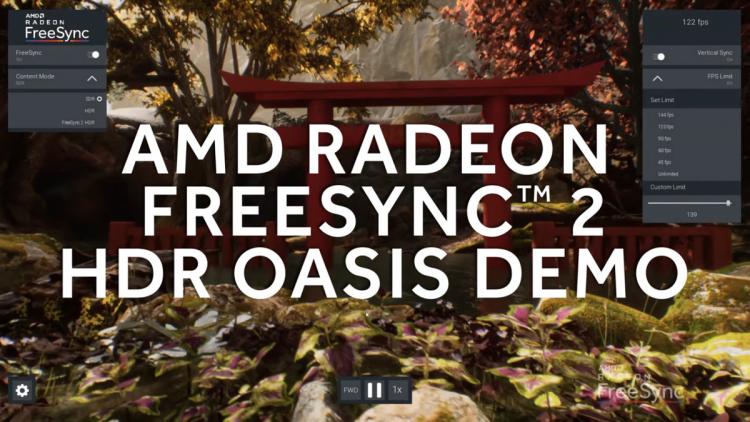 FreeSync and HDR are two technologies that offer plenty of technical information regarding their inner working, but really have to be experienced to appreciate. That's all well and good if you already have your fancy new monitor and AMD GPU, but can be something of a problem if you're still trying to make your mind up on the tech. prior to purchase. To address the shortcoming AMD are developing a new demo to better showcase the technology in retail stores and at events.

The AMD Oasis Demo is intended as a lightweight looping graphical showcase that can accurately represent the capabilities of FreeSync 2 HDR on appropriate monitors. Not only does that mean support for FreeSync's Variable Refresh Rate implementation - complete with Low Frame Rate Compensation - but also HDR content output. By setting up two displays side-by-side it will therefore be possible to show like-for-like comparisons with FreeSync on/off and HDR on/off; plus, it should be backwards compatible with vanilla FreeSync SDR monitors (without the HDR functionality, obviously).

In addition to straightforward FreeSync and HDR On/Off functionality, the Oasis interactive demo allows the adjustment of a range of image quality features including resolution scale, shadow quality, texture quality and motion blur on the fly. This has drawn comparison with benchmark utilities such as Unigen and 3DMark, but AMD are adamant that Oasis is not suitable for use as a benchmarking utility. 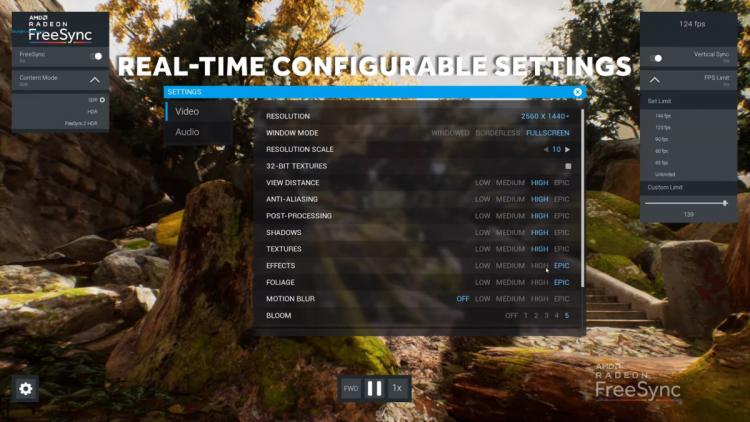 Currently the easiest ways to show-off Variable Refresh Rate functionality have been the NVIDIA 'Pendulum' and AMD 'Windmill' demos, neither of which were particularly fleshed out (and the later of which AMD depreciated some time ago). Simply playing a reasonably demanding game is another option. Unfortunately it's easy to miss the details in that scenario, or difficult know where the GPU rather than VRR is affecting your experience.

Don't be surprised if you see the Oasis demo in stores soon. Early builds are also being tested by media, and hopefully a more polished version will be made available to the public in the future. If nothing else it could make for an ideal troubleshooting aid.