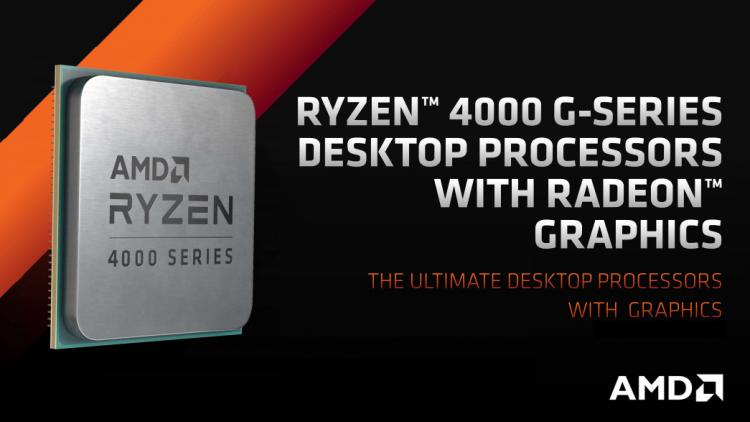 AMD are once again turning their attention to the desktop PC platform this week with the launch of an APU series based on the Zen 2 processor microarchitecture. The Ryzen 4000 G-Series takes its cues from the recently released mobile Ryzen 4000 H-Series through more cores (and threads), better graphics performance and additional features. New APUs are now available in systems from popular OEMs worldwide.

AMDs launch of Ryzen 4000 G-series APUs encompasses AIOs, pre-built consumer systems and enterprise markets, but not system integrators (such as popular regional etailers) and DIY assembly. Their reasoning doesn't explicitly set these sectors aside, but priority has obviously been given to larger potential markets at this time; their representatives are nonetheless keen to stress that new APUs compatible with 400-series and 500-series motherboards are on their way. If pushed, wed speculate that they will be announced to coincide with the A520 motherboard platform later this summer. 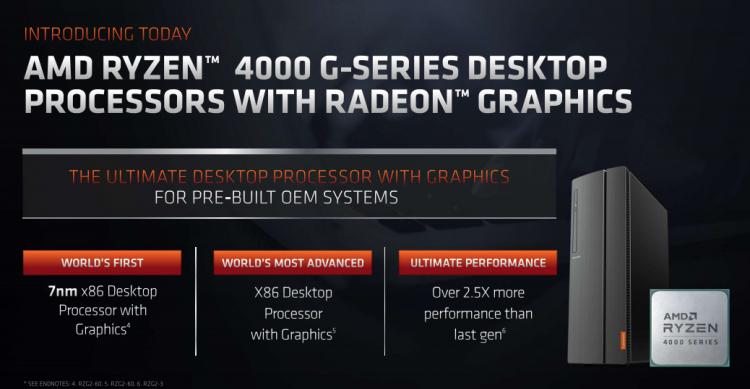 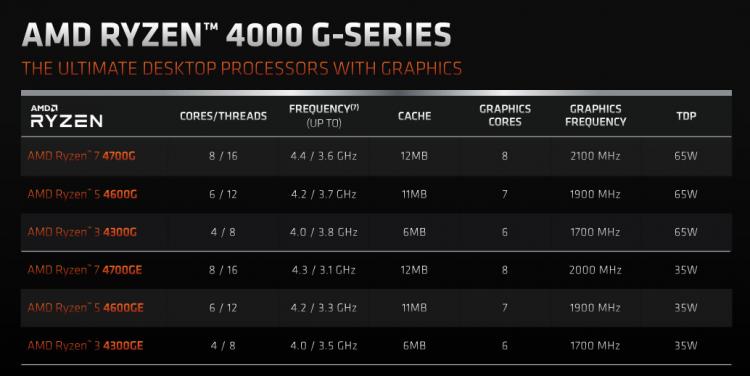 Six- and eight-core processors represent a substantial increase in performance over the previous APU generation, which peaked at 4 cores in the 3400G. AMD now feel comfortable positioning their APUs against Intels mainstream desktop equivalents on both graphics and CPU core performance, up to the Core i7-9700 (also a 65W TDP SKU). Thats a major departure from even one generation ago.

Joining them are Ryzen PRO 4000 G and GE-series equivalents intended for enterprise markets with more stringent security and system management requirements. The underlying silicon and relative performance should be nigh-on identical, but the additional features and support structures necessary for enterprise systems demand a class of product set apart from mainstream consumer chips.

Finally, the Athlon lineup has now been refreshed to incorporate Zen+ APUs and given new nomenclature to draw direct comparisons to the Pentium Gold and Silver CPU lineup in budget-oriented markets.

Core Design - A Return to the Monolith

It will come as no surprise that Ryzen 4000 G-series APUs share the vast majority with the 4000 H-series mobile APUs launched in the spring. They are in fact based on the same silicon, but binned for higher performance brackets made possible by increasing the power budget and range of cooling solutions. As such, they differ significantly from both the Ryzen 3000-series CPUs and to a lesser extent the 3000 G-series APUs currently available in the desktop market.

Third Generation Ryzen 3000-series CPUs are famously structured with a chiplet design, featuring one or more Core Complex Dies (CCDs) and a single large IO Die (IOD). The 4000-series APUs by contrast have a single monolithic die incorporating Core Complexes and IO, in addition to the graphics compute units. They are nonetheless manufactured using the same 7nm process from TSMC thats used to create the CCDs of 3rd Gen Ryzen CPUs.

To compensate for higher latency introduced by a chiplet structure, 3rd Gen Ryzen incorporates a huge 32MB of shared L3 cache per CCD into the design. Zen 2 APUs scale back their L3 cache provision considerably to a maximum of 8MB, while both apportion 512kb L2 cache to each core.

More similarities remain at the level of the Core Complex. Two CCXs are present on the APU die for up to 8 cores per processor; 4 cores per CCX has been a hallmark of Zen and Zen 2 architectures in both CPU and APU realms thus far. 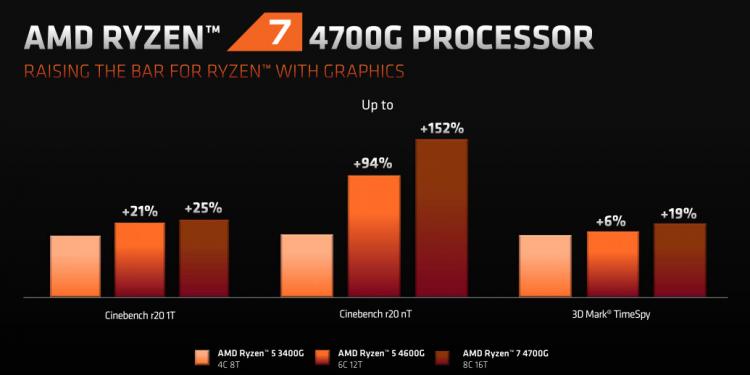 Its also notable that AMD have opted to reduce the number of RX Vega Compute Units on the die from a maximum of 11 (as on the Ryzen 5 3400G) to 8. More than compensating for this is an increase in typical CU operating frequency from ~1400MHz to up 2.1GHz. AMD estimate that once aggregated the graphics performance differential per CU is ~60%, with a total graphics improvement from the 3400G to the 4000 G-series flagship to be on the order of 19%.

A key feature of the 3rd Gen Ryzen 3000-series CPUs missing from both the 4000 H-series and 4000 G-series APUs is PCIe 4.0 support. While not necessary on mobile platforms due to the restricted nature of available discrete graphics components, the absence of PCIe 4.0 NVMe storage support may be felt in the business environment even if alternatives (without graphics) are available.

In common with previous APU generations the 4000 G-series SoC supports only eight PCIe 3.0 lanes off the CPU rather than the full sixteen, restricting the bandwidth available to attached discrete graphics and underscoring the concept that the APU's expected use case is predominantly without additional graphics hardware support.

Transitioning to Zen 2 could lead to a major shake-up of consumer pre-built and business markets in AMDs favour. The generational leap has finally placed core IPC on par with Intels Coffee Lake derived processors and stretched their multi-threaded leadership further, even while maintaining their lead in graphics performance. AMDs own internal benchmarks would appear to indicate that the only competition would be based on price, all other numbers show a remarkable miss-match between the two lineups.

It should be noted however that AMD make no comparisons between their APUs and Intel new 10th Generation lineup. Difficulties with sourcing the new processors put paid to a rigorous in-house test of the new silicon, but they claim to be confident that a similar picture would be drawn. The fact that Intels new processors change little in the underlying architecture, instead relying on unlocking Hyperthreading down the product stack and realigning the price brackets, gives the Red Team some justification for their confidence. 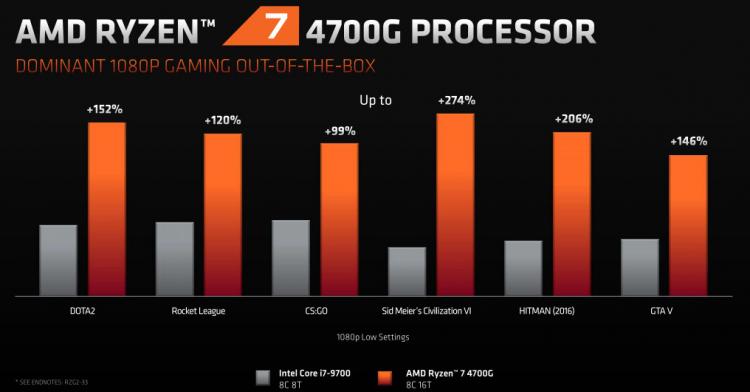 The key selling point of AMDs APUs compared with Intel processors equipped with UHD graphics has been game playability, and the former really want to drive that home with the Ryzen 4000 G-series. Their marketing emphasises playability, with representatives highlighting the >2x FPS levels over Intel competitors in the same bracket at 1080p, and stating that this represents something on the order of ~30fps vs 10-15fps in games such as GTA 5 and HITMAN (2016). Independent verification is still needed for these claims however, and its worth remembering that neither solution would be optimum for a true gaming system.

Products Launching Today, But More To Come For Consumers

Enthusiasts around the world have been looking forward to getting their hands on Zen 2 Desktop APUs and directly comparing monolithic to chiplet designs and performance levels on a like-for-like basis, but that will have to wait. For now Ryzen 4000 G-series APUs will be exclusive to pre-built systems from the likes of HP and Lenovo, and not officially available through retail channels direct to consumers. 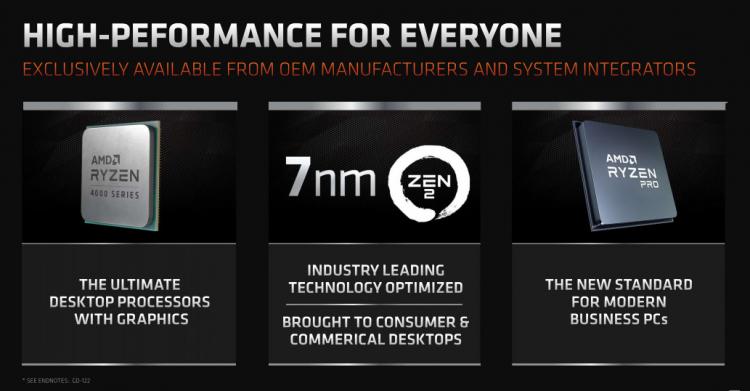 The performance level of AMDs new APUs indicate a successful transition to the Zen 2 architecture, echoing the success of AMDs Ryzen Mobile launch earlier this year. The proof of the pudding will however be in the OEM design wins they can secure from major partners that will bolster their presence in the pre-built market, an arena in which Intel enjoys a healthy market share lead.

Despite the performance improvement, the APU technology landscape still consistently lags behind CPUs. The clearest examples of this are in PCIe 4.0 provision (i.e. none), which itself is a hang-over from it not currently being a necessary technology for the mobile market, and the use of Radeon Vega graphics architecture rather than more modern RDNA Compute Units. AMD may have an advantage today, but the cadence of their feature updates could leave them wrong-footed should Intel finally succeed in revitalising their desktop processor fortunes.

You can read more about Ryzen 4000 G-series APUs at amd.com.

There are currently 716 user(s) online:
Google