AMD have had a tough time since releasing the AM3+ FX line of CPUs. The new CEO, Rory Reed, has been axing staff and it would appear, axing future lines of processors too. While a new global shift in culture from AMD in the x86 market will mean that AMD do not intend on competing against Intel anymore in the high end desktop market, they have assured consumers that they will be focusing on low power, emerging markets and the cloud. This could mean that AMD may put greater effort on visual computing and GPGPU.

As AMD move onto their next line of desktop Fusion processors, Trinity will give AMD a sigh of relief. Expected to bring 20% better CPU power over Llano brought about by AMD's next gen Bulldozer cores, 'Piledriver', and 30% better graphics power using Southern Islands based Radeon 7000 series architecture. 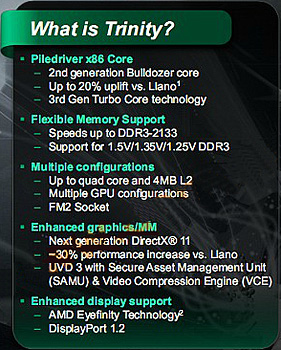 Expected to enter production early to mid March 2012, AMD expects Trinity to offer better value and performance over current solutions as well as providing better availability and pricing than Llano due to better yields. One criticism would be that AMD will face stiff competition from Intel's Ivy Bridge, which projected benchmarks have recently surfaced for.