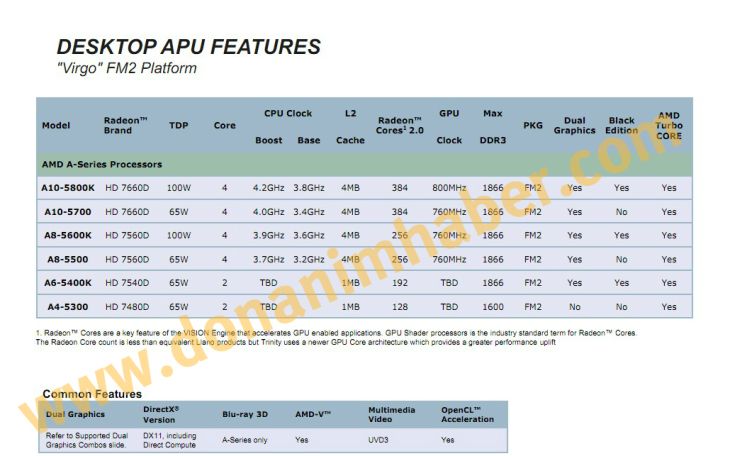 The slow drip of Trinity information is inexorable, with today's latest surrounding the specs of AMD's upcoming line of APUs. The above slide leaked by Donimhaber provides much more information on the specs of AMD's newest line of APU, including frequencies, core counts etc. The successor to Llano, Trinity will be composed of Piledriver modules in dual and quad-core configuration in the A4-A10 SKU's.

As you would expect with Bulldozer's 2nd generation the CPU clock speeds are very high in order to gain performance benefits over Stars-based cores. The comparative performance of Trinity's quad-core A10 and Llano's top-end A8-3870, based on the ageing Stars cores seen in the Phenom II CPU's, will no doubt also have review sites buzzing and inferring the performance of the upcoming Piledriver desktop CPU.

The slide makes note of the graphics shaders being "Radeon Cores 2.0". It's worth remembering that this does not refer to next generation GCN cores as on the 7900-series descrete GPU's, but rather the VLIW4 architecture seen on the 6900-series Cayman. It claims to be a fairly significant boost over Llano when the impact of more efficient architecture and higher shader clocks shake out, but keeps the Trinity APU within the bounds of 'tried and tested' rather than experimental.

Trinity APU's are due in Q2 2012, with the line being fleshed out in the second half of the year.

There are currently 488 user(s) online:
Google