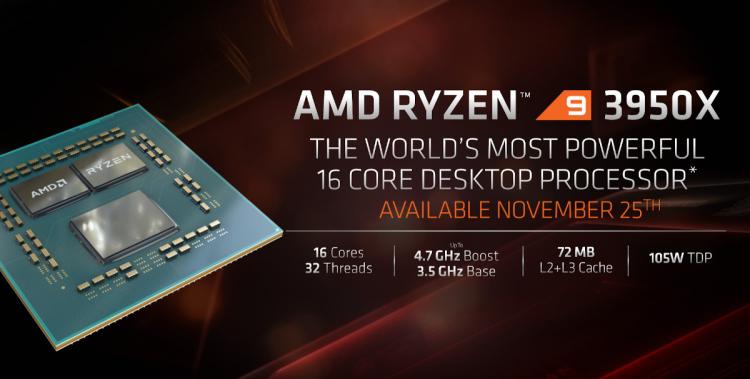 AMD have enjoyed the lion's share of plaudits (and sales) in the desktop CPU arena this year with the launch of their 3rd Generation Ryzen lineup. Introducing the mainstream market to as many as 12 cores, improving their own architectural IPC and premiering PCI-Express 4.0 each drew their own particular markets, and (despite a few hiccups along the way) they've dominated the summer months as a result. But now it's swiftly approaching time to finish off the range and switch gears to bring Zen 2 to the HEDT platform.

The massive Ryzen 9 3950X was scheduled for September, but a combination of factors potentially relating to 7nm supply and demand for the enterprise-class EPYC processors kept it out of stores. Thankfully we finally have a launch date of November 25th, and pricing for the 16-core, 32-thread mainstream behemoth. 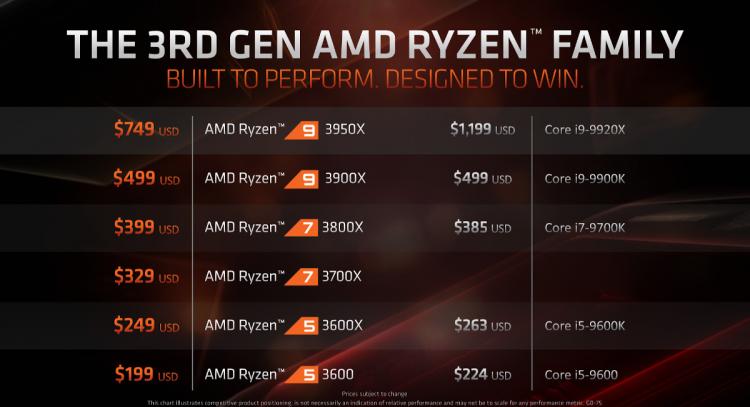 Boasting a 3.5GHz base clock boosting up to 4.7GHz, the Ryzen 9 3950X increases the anticipated performance per core compared to the 3900X to make it the uncompromising flagship of the mainstream Ryzen 3000-series and AM4. That it does this while maintaining a TDP envelope of 105W is a testament to AMD's finely tuned binning process.

When it launches later this month it will go head to head not only with Intel's Core i9-9900X, to which it is comparable in gaming according to pre-launch benchmarks, but also the HEDT i9-9920X. The latter 12-core formerly $1200 CPU loses out on most fronts, not only due to its aging architecture but also the inability to push operating frequencies and stay within TDP limits.

In this vein AMD claim they are offering "HEDT performance to mainstream users, redefining the line between HEDT and the mainstream in the process". All while improving power efficiency in part thanks to TSMC's 7nm manufacturing process.

Bear in mind however that the 3950X will not be bundled with a cooler this time around. AMD are recommending an AIO or high performance air cooler, and enthusiasts investing in in this platform performance band typically have plenty of know-how and their own cooler preferences. This also keeps the ticket price of the CPU down, which is no bad thing.

One factor that might trip up potential users is that the CPU will require a motherboard updated to AGESA 1.0.0.4. Manufacturers are currently in the process of rolling out updates for X570-series 'boards, but BIOS updates for older models could easily be delayed past the CPUs anticipated launch date. The vast majority of AM4 motherboards may support 3950X in theory, but in practice users will need to be careful not to buy blindly.

Also coming soon is a new power-saving feature for Ryzen Zen 2 CPUs AMD are calling ECO Mode. Derived from adaptations to mobile environments, particularly configurable TDP for OEMs, ECO Mode allows users to step down their CPU one rung in the TDP ladder. For example, a 95W TDP could be stepped down to a 65W profile, limiting power consumption alongside performance.

This feature will be accessible through Ryzen Master, and compatible with all 3rd Generation Ryzen 3000-series CPUs. 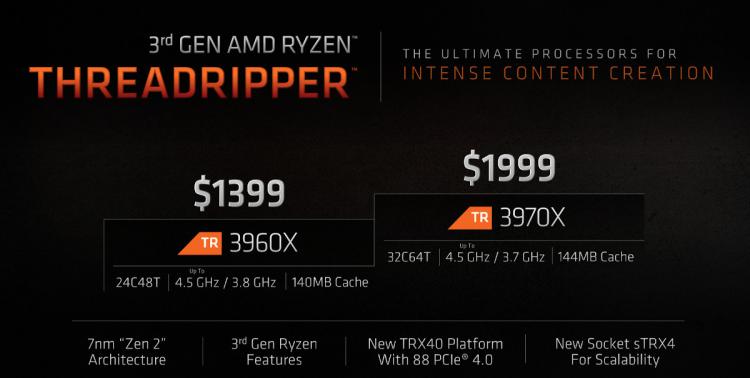 AMD's 2nd Generation Threadripper series was based on the 12nm Zen+ architecture and topped out at 32-cores (64 threads) on the 2990WX. The entry-point 2920X was a 12-core CPU, and clearly in many respects that now been superceeded even by the new mainstream Ryzen solutions. So, what will the third generation bring?

Well, not more cores for a start. The Ryzen Threadripper 3970X will be a 32-core, 64-thread CPU, much like the 2990WX; it's leaner sibling will be a 24-core solution, leaving an 8-core specification gap between the mainstream 3950X and HEDT 3960X. But that's not the end of the story.

Zen 2's architectural improvements incorporate support for PCI-Express 4.0, of which the platform supports a total of 88 lanes in a variety of configurations. PCIe 4.0 has double the bandwidth of PCIe 3.0, and will be a killer feature for applications that demand extreme bus bandwidth.

Memory support also improves from DDR4-2933MHz to 3200MHz in quad-channel configurations. Zen 2's improved memory controller has been a major talking point of 3rd Gen Ryzen and that's likely to be the same with 3rd Gen. Threadripper. ECC support is dictated by the motherboard manufacturer, but isn't ruled out by the CPU. 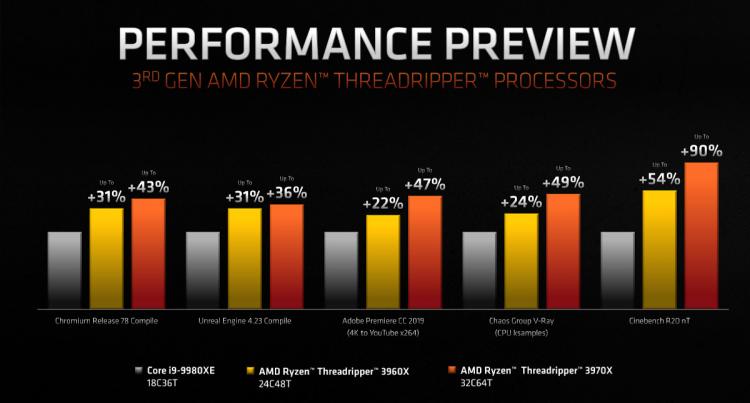 And perhaps the most important factor is an increase in reference frequencies. Both the 3960X's and 3970X's boost frequencies have increased to 4.5GHz from 4.2GHz on the 2990WX and 2970WX, but arguably more impressive is a 0.5GHz improvement in base frequencies from 3.0GHz to 3.5GHz.

AMD anticipate that both will wipe the floor with Intel's Core i9-9980XE, although it remains to be seen whether Intel can pull a rabit out of the hat in their upcoming refresh. Compared to their older platform, AMD have outlined an approximately 30% improvement in the transition from 2990WX to 3970X. 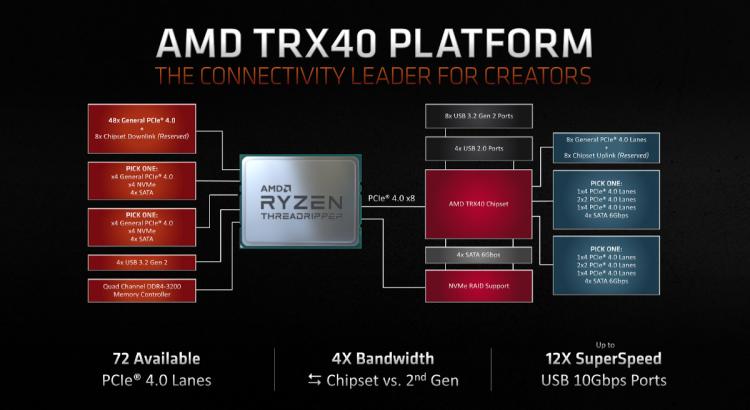 Unlike the mainstream desktop platform however, 3rd Gen Threadripper will necessitate the transition to a new motherboard chipset and CPU socket that isn't backwards compatible with the prior generation. TRX40-chipset motherboards will be equipped with the new TRX4 socket that has an identical cooler mounting specification to TR4; older CPU coolers that support the 250W TDP of high-end 2nd Gen. Threadripper should be compatible with the new lineup.

The new Threadripper CPUs are configured with four active CCDs and one centrally located IOD; Threadripper 3960X models have two cores disabled per CCX. There is scope for more active cores in theory - AMD refer to the platform as a highly scalable one - but the red team did categorically state that dual-socket solutions will not be in place.

Third Generation Threadripper and the TRX40 motherboards will be launching simultaneously with Ryzen 9 3950X on November 25th, which is now sure to be a busy day for retailers.

Whetting the appetite somewhat ahead of the enthusiast-class processor launches will be a new <$50 entry-level APU arriving on November 19th. The Athlon 3000G is an in-line replacement for the Athlon 200G, based on the Zen+ architecture incorporating Vega 3 graphics on-board.

As one might expect, improvements are made in every aspect of the chip. It's clocked 300MHz higher, and the GPU also recieves a 100MHz frequency bump. Most importantly however, the dual-core core, four threads model can be overclocked out of the box, and should fairly easily enjoy a bump to 3.9GHz with minimal work.

Both core and memory overclocking are supported in this new budget option, which is shipped with an over-specced 65W TDP cooler for additional headroom. It should be well equipped to take on a wide array of games either with on-board graphics or coupled to a discrete GPU, and offers excellent affordability that could make it a compelling option for tech-savvy enthusiasts and students on a tight budget.