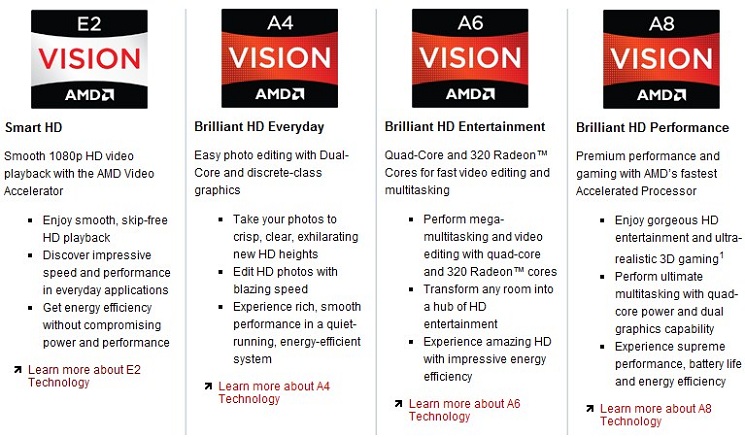 The AMD A-Series APU represents an inflection point for AMD and is perhaps the industrys biggest architectural change since the invention of the microprocessor, said Rick Bergman, senior vice president and general manager, AMD Products Group. It heralds the arrival of brilliant all-new computing experiences, and enables unprecedented graphics and video performance in notebooks and PCs. Beginning today we are bringing discrete-class graphics to the mainstream.

The AMD A-Series APUs (previously codenamed Llano) are currently shipping and scheduled to appear in more than 150 notebooks and desktops4 from leading OEMs throughout the second quarter of 2011 and beyond. Delivering powerful serial and parallel computing capabilities for HD video, 3D rendering and data-intensive workloads in a single-die processor, the AMD A-Series APUs offer software developers unprecedented power and potential in an ever smaller package.

The AMD A-Series APU delivers the power to match how consumers actually use their PCs: all day  without sacrificing performance. Delivering more than 10.5 hours of resting battery life  a more than 50 percent increase compared to the 2010 AMD Mainstream Platform  users can get their work done or watch multiple HD movies on a single charge5. Additionally, AMD dynamic switchable graphics optimize battery life on PCs featuring AMD dual-graphics solutions by intelligently managing power states on the APU and separate discrete AMD Radeon GPU.

The battery life of the AMD A-Series APU is a huge leap forward and will surprise many consumers and commercial customers, said Chris Cloran, Vice President and General Manager, Client Division, AMD. And the supercomputer-like performance will give people some revolutionary capabilities, like real-time image stabilization taking out all the shakes and jitters in those hand-held videos on the fly, while youre watching.

People are making, sharing and enjoying more digital content than ever on their PCs, and the AMD VISION Engine - cutting-edge hardware and software featured with every AMD A-Series APU that automatically helps digital content like videos, games and photos look their best. HD video is crystal clear through dedicated video playback technology and dynamic post-processing, and websites render faster with accelerated HTML5 and Direct2D performance. Editing, transferring and viewing HD content is fast and easy with support for advanced connection standards, including HDMI 1.4a, DisplayPort 1.1, and USB 3.0, along with native support for multiple monitors.

Consumers are doing more than ever before with their PCs  from work to play  and with the AMD A-Series APU, even their laptops can keep up, delivering next generation parallel processing. With up to 400 gigaflops for notebook, and up to 500 gigaflops for desktops8, AMD A-Series APUs ensure users have the horsepower needed to handle the most demanding applications such as video and image processing, facial recognition, gesture recognition and multitasking scenarios. For the most challenging environments, AMD Fusion A-Series APUs offer AMD Turbo Core Technology, which dynamically optimizes and boosts CPU and GPU performance to power-efficient levels depending on the applications being run.

AMD has seen great momentum in the software developer community since the launch of AMD Fusion APUs in January 2011, with more than 50 leading applications now accelerated by the family of AMD Fusion APUs and advanced browsers like Internet Explorer 9 delivering even more immersive, next generation web experiences when running on an AMD Fusion APU-powered PC. And, the inaugural AMD Fusion Developer Summit, running now through June 16 in Seattle, Washington, is providing a forum for developers, academics and innovators to collaborate around parallel programming and industry standards, like OpenCL, helping the software ecosystem build on the promise of the latest computing methodologies.