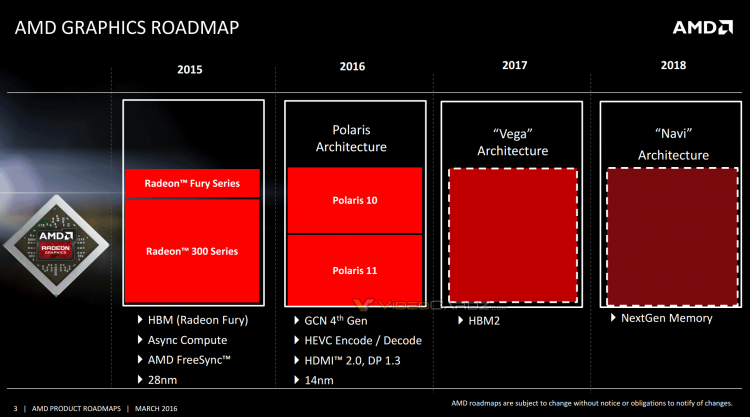 AMD's official graphics roadmap, as shown by Videocardz.com/ this week, is our first look at their upcoming graphics products for this year, the next, and 2018. Although roadmaps often slip, especially GPU roadmaps, we now have some idea of what we can expect in the years to come.

Everyone should be well aware that 2016 looks set to be the year of Polaris, the new mainstream GPU architecture based on the 14nm production process. The range is split into two GPUs - codenamed Polaris 10 and 11, with Polaris 10 being the higher specced model - which will be further binned into higher and lower performance parts similar. That's not a new process - AMD have been binning their GPUs into XT and PRO parts for some time, such as the Hawaii XT and Hawaii PRO at the core of the Radeon R9 290X and R9 290 respectively.

Polaris is based on the 4th Generation GCN architecture, and for the first time AMD are clearly branding their architecture generation in a way that NVIDIA has done for years. This will hopefully make the feature-set of each SKU far more clear, unlike the confusing R9 200-series lineup where support for AMD TruAudio and other features wasn't well defined.

Speaking of features, Polaris will support HEVC (h.265) hardware encode/decode, HDMI 2.0 and DisplayPort 1.3. Lack of HDMI 2.0 was a particular oversight in the R9 Fury/Nano range which AMD are obviously keen to avoid with this year's lineup, whilst on-board HEVC encode/decode should be a boon for system configurations that output at >4K resolutions.

Currently it's understood that AMD's 2016 lineup will once again rely on GDDR5 VRAM, reserving HBM for Fiji, in part due to memory cost.

Although the roadmap indicates that Polaris 10 and 11 will be the mainstay of 2016, up-to an including an assumed Radeon R9 490, it's anticipated that Fiji-based cards will still be important at the premium end of the spectrum. The Radeon Pro Duo is imminent and, unless they have a huge surplus of Fiji GPUs, production will need to continue to support the new SKU. It also means that Polaris 10 won't rival the R9 Fury X's performance, instead offering far higher power efficiency (rumoured to be 2.5x, with a max card TDP of 150W) and excellent mainstream and enthusiast performance.

2017 is naturally more speculative, but should see the arrival of Vega (presumed to be GCN 5). Whilst incremental architecture improvements are almost certain to be present the chief development is HBM2, matching NVIDIA's flagship Pascal GPU. This will allow support for far higher VRAM sizes than Fiji is currently capable of, which will be important for high-resolution gaming and workstation applications. Given how long 28nm stayed with us it seems likely that 14nm will continue to be the the manufacturing basis for this generation of GPUs.

Come 2018 AMD will be eager to introduce GPUs based on the Navi architecture. Even less is known about Navi than Vega, but AMD state that it will feature 'next-generation memory'. Considering that HBM2 isn't even here one wonders what form that memory will take, but more important still will be the presumed filtering of new memory types down the product range.

If AMD are serious about Polaris for 2016 we'd anticipate major announcements close to Computex in June.