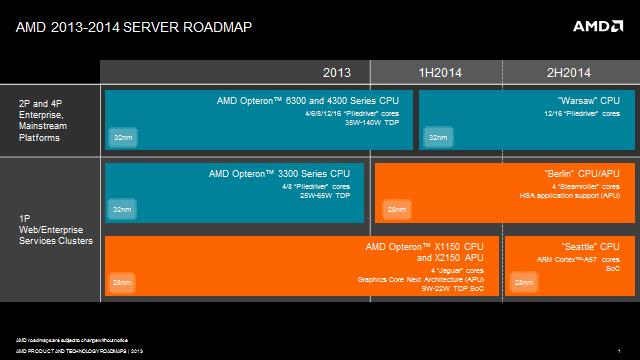 Additionally, AMD revealed details of its 2014 server portfolio including best-in-class Accelerated Processing Units (APUs), two- and four-socket CPUs, and details on what it expects to be the industrys premier ARM server processor. This is on the heels of announcing the general availability of the AMD Opteron X-Series processor, code named Kyoto, which dominates the small-core server market on every performance benchmark. These forthcoming AMD Opteron processors bring important innovations to the rapidly changing compute market, including integrated CPU and GPU compute (APU); high core-count ARM servers for high-density compute in the data centre; and substantial improvements in compute per-watt per-dollar and total cost of ownership.

Our strategy is to differentiate ourselves by using our unique IP to build server processors that are particularly well matched to a target workload and thereby drive down the total cost of owning servers. This strategy unfolds across both the enterprise and data centres and includes leveraging our graphics processing capabilities and embracing both x86 and ARM instruction sets, said Andrew Feldman, general manager of the Server Business Unit, AMD. AMD led the world in the transition to multicore processors and 64-bit computing, and we intend to do it again with our next-generation AMD Opteron families.

In 2014, AMD will set the bar in power-efficient server compute with the industrys premier ARM server CPU. The 64-bit CPU, code named Seattle, is based on ARM Cortex-A57 cores and is expected to provide category-leading throughput as well as setting the bar in performance-per-watt. AMD will also deliver a best-in-class APU, code named Berlin. Berlin is an x86 CPU and APU, based on a new generation of cores named Steamroller. Designed to double the performance of the recently available Kyoto part, Berlin will offer extraordinary compute-per-watt that will enable massive rack density. The third processor announced today is code named Warsaw, AMDs next-generation 2P/4P offering. It is optimised to handle the heavily virtualized workloads found in enterprise environments including the more complex compute needs of data analytics, xSQL and traditional databases. Warsaw will provide significantly improved performance-per-watt over todays AMD Opteron 6300 family. 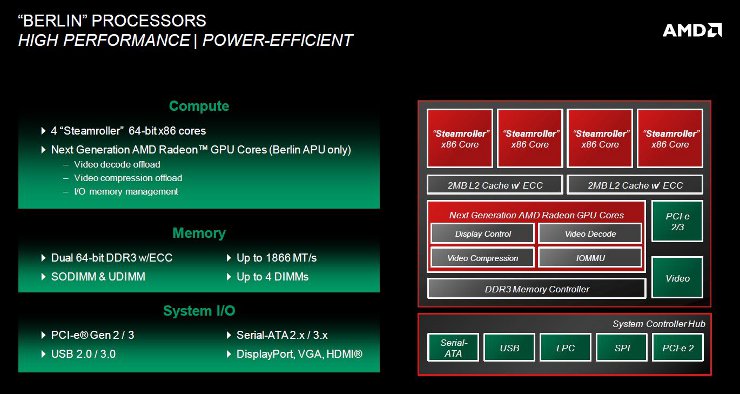 Seattle will be the industrys only 64-bit ARM-based server SoC from a proven server processor supplier. Seattle is an 8- and then 16-core CPU based on the ARM Cortex-A57 core and is expected to run at or greater than 2 GHz. The Seattle processor is expected to offer 2-4X the performance of AMDs recently announced AMD Opteron X-Series processor with significant improvement in compute-per-watt. It will deliver 128GB DRAM support, extensive offload engines for better power efficiency and reduced CPU loading, server caliber encryption, and compression and legacy networking including integrated 10GbE. It will be the first processor from AMD to integrate AMDs advanced Freedom Fabric for dense compute systems directly onto the chip. AMD plans to sample Seattle in the first quarter of 2014 with production in the second half of the year.

Berlin is an x86-based processor that will be available both as a CPU and APU. The processor boasts four next-generation Steamroller cores and will offer almost 8X the gigaflops per-watt compared to current AMD Opteron 6386SE processor. It will be the first server APU built on AMDs revolutionary Heterogeneous System Architecture (HSA), which enables uniform memory access for the CPU and GPU and makes programming as easy as C++. Berlin will offer extraordinary compute per-watt that enables massive rack density. It is expected to be available in the first half of 2014.

Warsaw is an enterprise server CPU optimised to deliver unparalleled performance and total cost of ownership for two- and four-socket servers. Designed for enterprise workloads, it will offer improved performance-per-watt, which drives down the cost of owning a Warsaw-based server while enabling seamless migration from the AMD Opteron 6300 Series family. It is a fully compatible socket with identical software certifications, making it ideal for the AMD Open 3.0 Server  the industrys most cost effective Open Compute platform. It is expected to be available in the first quarter of 2014.