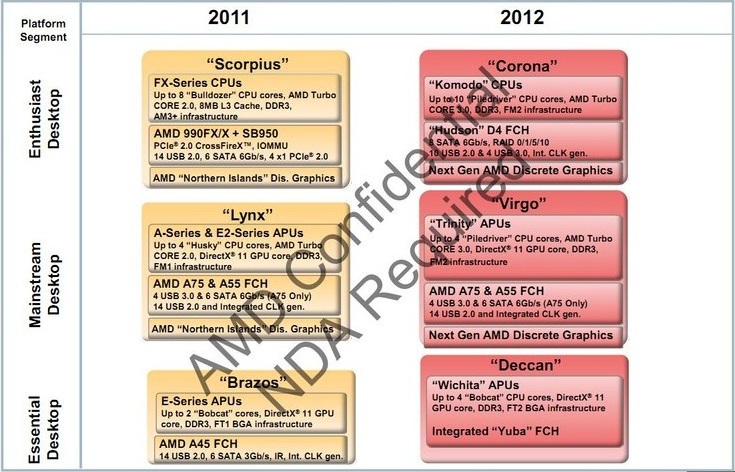 In the previous Roadmap the infrastructure was labelled FMx, which is now known to be FM2. This confirmed our suspicion that AM3+ will be relatively short-lived, and that the next-gen 'Komodo' CPU and 'Trinity' APU will be on a new socket.

While the 'Trinity' APU will feature up to four 'Piledriver' cores and a new DX11 GPU core (which is tipped to be upto 50% better than current Llano), Turbo CORE 3.0 and will also be on the FM2 socket. Interestingly, for the Virgo platform the A75 chipset is carried over from Llano so there may be a possibility that 'Trinity' is backwards compatible with FM1, though as suggested in the opening paragraph and worded more clearly here, it is highly likely that FM2 CPU's will not backwards compatible with AM3+.

Another note will be the 'Wichita' APU (SoC maybe?) which will target the ultraportable sector which will include 4 Bobcat cores (previously they were listed as 'enhanced Bobcat cores') and an integrated FCH called 'Yuba'.

Of course there is no timeline for expected release but with working 'Trinity' samples already been displayed, I would hazard a guess that the FM2 infrastructure has been high on AMD's focus for a while and may come sooner than expected, afterall these platforms are expected to compete against Intel's Ivy Bridge and Sandy Bridge-E CPUs.

There are currently 525 user(s) online:
Google