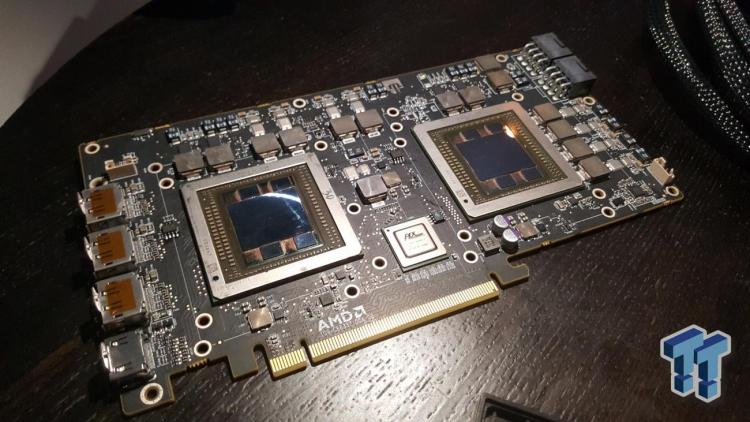 Via WCCFTech.com comes word from Benchlife.info that AMD's Radeon R9 Fury X2 - a dual-GPU card featuring two Fiji XT GPUs and HBM memory originally scheduled for release before the end of 2015 - will be delayed for an undisclosed period of time that could run to March next year. Citing production issues, Benchlife.info notes that although AMD and AIBs have received engineering samples of the chips actual mass production has yet to ramp up, hence the expected delay.

In place of a hard launch (defined as a launch where consumers can buy the product on same day) it's expected that AMD will perform a 'soft' or 'paper' launch. Cards will be demoed to the press and other members of the gaming media alongside specifications and pricing information, but the card itself will remain on pre-order until stock becomes available in 2016.

Paper launches of high-end hardware aren't exactly new. Just this year AMD themselves unveiled their Radeon R9 Fury and Fury X graphics cards, but it turned out that retailers would have to wait weeks for stock. Paper launches of somewhat lower profile products are even more common, allowing manufacturers to capitalise on a slow period in the news cycle and maximise exposure. Even so, the delay rarely runs into more than a few weeks.

Naturally these reports need to be taken with a pinch of salt as it relies on unnamed sources and insider information. We will hopefully know more in the coming weeks.