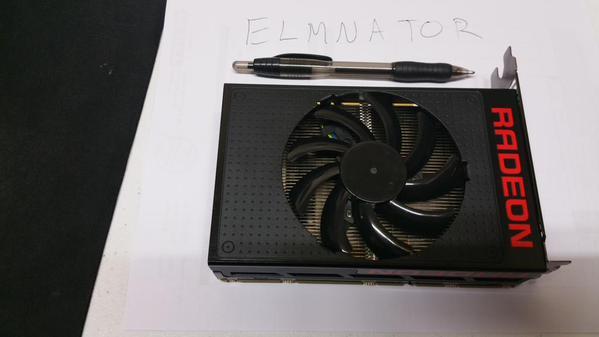 AMD's Radeon R9 Fury and Fury X cards have been out for some time, but that's not the end of the story of their new Fiji GPU. Two additional SKUs using their next-generation architecture are planned (that we know of) and this week one of the upcoming designs was spotted in the wild.

A duo of tweets by Anthony Lackey AKA @Elmnator included the first non-promotional pictures of the R9 Nano, and from the looks of things the size at least lives up to the hype. The card, which barely overhangs the length of a PCI-Express slot, looks more like your typical budget GPU rather than the high-end product it's expected to be. Nonetheless early indications where of a 150-175W TDP GPU with double the perf/watt of a R9 290X; in principle it could very much be a mid-range powerhouse.

Lackey has partnered with AMD in previous promotional stunts, and these pictures (which presumably have been approved by AMD themselves) could also mean that the release of the card is closer than expected.