As September comes to a close AMD's Raise the Game promotion returns, refreshed with three new triple-A games that incorporate a little bit of AMD-flavoured optimisation. Borderlands 3, The Outer Worlds and Tom Clancy's Ghost Recon: Breakpoint are brand new to Raise the Game, and the latter isn't even set for release until October th. Plus, AMD have once again teamed up with Microsoft to offer a 3 months XBOX Game Pass for PC, giving access to Gears 5 and other first party titles.

A wide selection of AMD's latest generation of CPUs and GPUs are eligible for the Raise the Game bundle when bought through participating retailers. The entire range is split into three tiers - the more premium the product, the higher the tier it qualifies for. 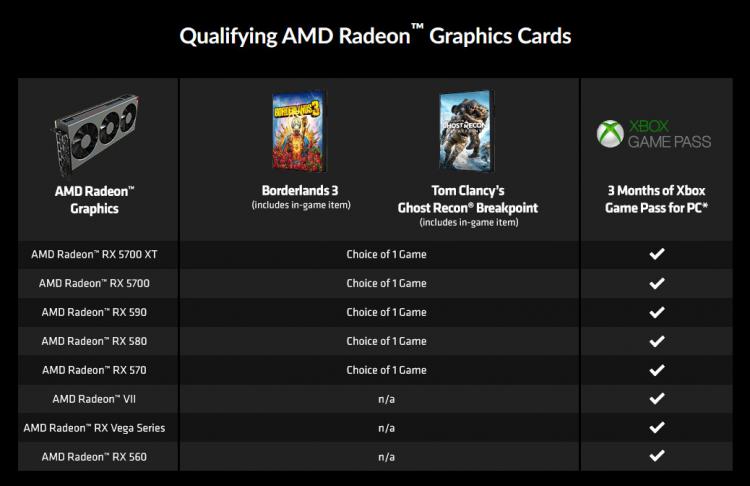 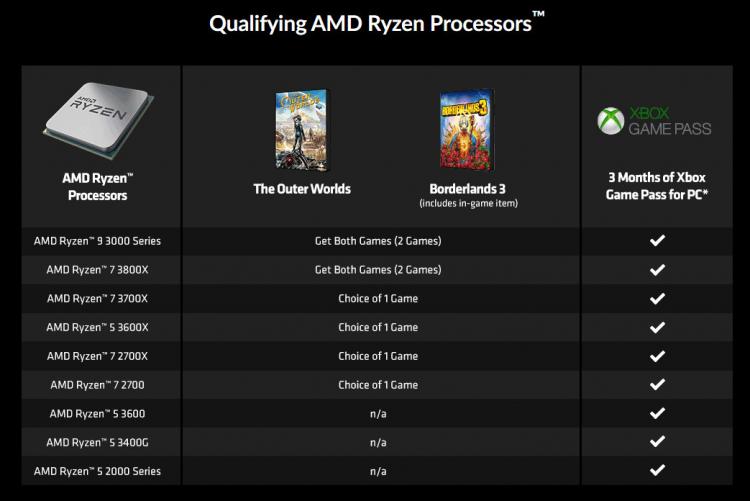 Most notable is that the Ryzen 9 3000-series, encompassing the Ryzen 9 3900X and still upcoming Ryzen 9 3950X, qualifies for both Borderlands 3 and The Outer Wilds but will be terribly difficult to get at anywhere near MSRP due to worldwide stock levels. The Ryzen 7 3800X is a more reasonable alternative, even if it does have a price premium over the 3700X that isn't entirely justified by performance differential.

The immensely popular Ryzen 5 3600 doesn't qualify for either game, and so picking up the 3600X may be better value if either title was on your personal shopping list. Otherwise, the Ryzen 7 2700-series is exceptional value currently (retailing below £200) and only gets more attractive with either of the new games.

On the GPU side, the new Radeon 5700-series qualifies for one of either Borderlands 3 or Ghost Recon Breakpoint, as does the value-oriented RX 570/580/590. The great bang for your buck RX Vega products don't, but might still be quite tempting if they hold a <£260 price.

Whether it be Borderlands 3 or Ghost Recon Breakpoint, the copy will also come with a free in-game item. Plus, whatever the flavour of Ryzen or Radeon, you will still be eligible for the 3-month XBOX Game Pass.

Blast your way to intergalactic loot or fight for survival behind enemy lines with AMD Radeon RX 5700 Series graphics cards. Set off on a mayhem-fueled adventure in Borderlands 3 with an in-game AMD Echo Device Communicator or prepare for battle as an Elite Spec Ops soldier in Tom Clancys Ghost Recon® Breakpoint with an in-game AMD Clan Emblem and Shirt. (AMD Echo Device Skin will be available in game on or before 10/8.) Wherever youre headed, get the ultimate gaming experience and performance with Radeon RX graphics cards.

The bundle is available both on individual component purchases and complete systems (including selected OEMs). UK participating retailers are as follows: