AOC Partners with G2 Esports as Sponsor and Hardware Supplier 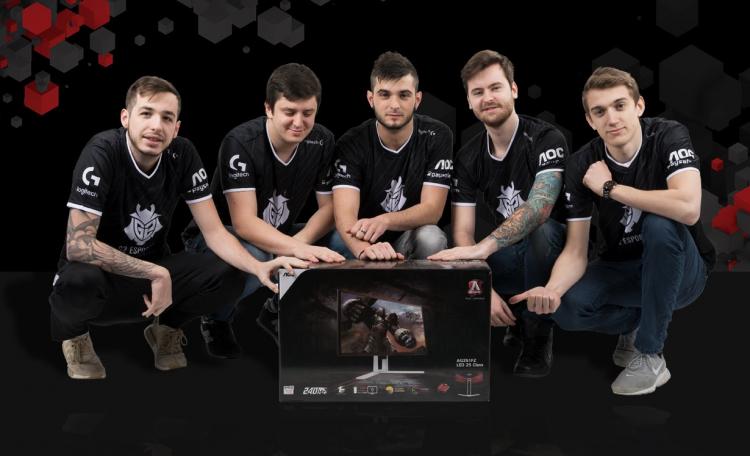 Amsterdam, 9 January 2018  Display specialist AOC today officially introduces their global esports sponsorship program by partnering up with G2 Esports, one of the most powerful and successful esports organisations worldwide. Founded in 2013 by renowned pro player Carlos ocelote Rodriguez, G2 Esports quickly established themselves as a titan of the European circuit at various international esports events, with an impressive track record and current 79 titles won. AOC is readying itself to increase that number by providing the fastest gaming displays ever produced.

We are really thrilled about our partnership with G2 Esports, as Stefan Sommer, Director Marketing & Business Management Europe, AOC points out. Working with top-notch esports teams inspires us in the way we think about product design and helps us identify which feature sets suit the respective genre or title best. G2 provides superb training facilities and excellent conditions for their players, and were looking forward to living up to those standards with our premium AGON series.

G2 Esports is widely respected for not only their success at international tournaments and in leagues but also for repeatedly assembling world-class talent in each of their rosters - be it League of Legends, CS:GO, Hearthstone, PUBG or Rocket League.

AOC is the new sponsor of G2 Esports

In February, G2 Esports formed a CS:GO line-up that is already spoken of as the legendary French super team. They took hotly contested trophies at DreamHack Masters 2017 and the ESL Pro Series Season 5  despite 2017 being their debut year.

G2 founder and CEO Carlos ocelote Rodriguez notes: Everyone in G2 Esports is beyond excited to team up with AOC. The involvement of professional players in developing the best gaming displays is essential and we are more than happy to lend our worldwide stars to assist AOC in achieving perfection. We are certain that our newly received premium AGON series AG251FZ displays with a lightning-fast refresh rate will be a crucial part of our optimal training environment. We know better than anyone that talent without hard work and practice is useless. We have no doubt that this belief and determination to be the best will lead us to victories in 2018. Our squads are hungrier than ever and we are happy to have partners who believe in our ambition and are always willing to help us move forward.

Under the sponsorship deal, AOC will equip the G2 training facilities with cutting edge AG251FZ gaming monitors, which boast an incredibly high refresh rate of 240 Hertz and a 1 ms response time. The eyes of trained pilots can perceive frames refreshing at a rate of roughly 200 per second. Recent studies also suggest that esports professionals reach comparable values during intense matches. As a result, we are providing G2 with only the fastest panels the market has to offer  empowering them to achieve their full potential, Sommer adds.