Well known for affordable CPU cooler designs and a wide range of GPU coolers, ARCTIC are now venturing into the realm of the semi-passive CPU cooler, an equally challenging arena. The FREEZER 32-series coolers leverage a fan controller developed in Germany to facilitate lower pre-stall fan PWM voltages, ensuring silent operation when the CPU is at lower temperatures whilst not compromising top-end performance. 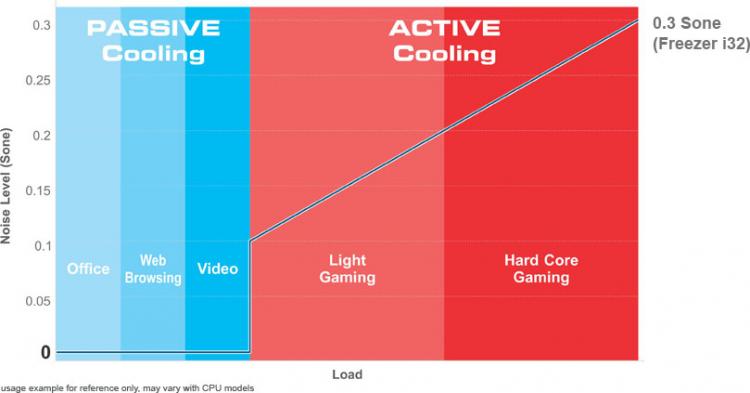 Freezer i32/A32 coolers are a natural successor to the near silent 2012-vintage Freezer 30-series. Although naturally catering towards low-power systems, 32-series coolers are recommended for CPUs rated at up to 150W TDP. As a result even overclocked CPU models are catered to, which can still take advantage of the semi-passive design thanks to the CPU's own power saving technology.

The Freezer 32-series coolers operate passively during standard windows operation, spinning up the F12 PWM fan to low levels at 40% PWM. Even at this point however the fan is intended to be barely audible. The robust integrated fan controller slowly ramps up the speed with load, targeting a linear relationship between CPU temp. and noise so the noise level is the minimum it needs to be whilst still adequately cooling the processor.

Due to a streamlined design and modified mounting system the i32/A32 weighs almost 260g less than the i30/A30, making it more appropriate for shipping whilst installed in a system. The fan retention mechanism has also been revised, with the bulky bracket removed in favour of light-weight clips. Overall the Freezer 32-series should be easier to install, transport and enjoy the fruits of.

Also available is a 'continuous operation' model, AKA the Freezer 32 CO. This cooler features a fan with robust dual ball-bearing motor, optimised for longer lifetimes under continuous use.

More information on the Freezer-32 series can be found at http://www.arctic.ac/uk_en/catalogsearch/result/?q=i32%2C+i32+co%2C+32series/, in addition to a comprehensive catalogue of CPU and VGA cooling solutions.