AS 3 Series from populaur innovators ASUSTOR arrives on the market

Taipei, Taiwan, July 15th, 2013 ASUSTOR Inc., a leading innovator and provider of network storage solutions, has announced the launch of its brand new AS 3 Series Network Attached Storage (NAS). The AS 3 Series NAS devices feature powerful multimedia applications including support for 1080p high definition video playback and are the first devices in its class to come equipped with Intel® Atom 1.6 GHz dual-core processors along with 1GB of DDR3 memory. The devices in this new series consist of the 2-bay AS-302T model and the 4-bay AS-304T model. All devices boast a wealth of power saving features including internal and external disk hibernation, Night Mode and System Sleep Mode (S3). During System Sleep Mode, only 0.8 W of power is consumed, helping users to save a significant amount of energy. 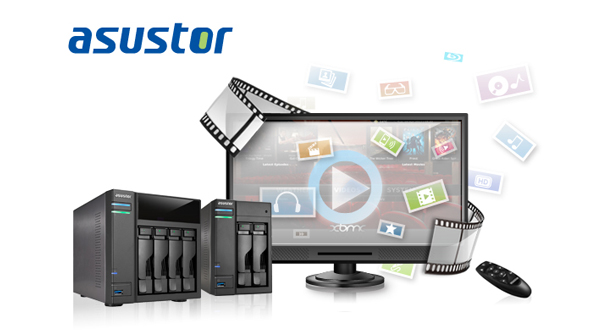 With respect to hardware, the AS 3 Series was designed with multimedia and home cloud server applications in mind. In addition to its HDMI interface inherited from ASUSTORs AS 6 Series, the AS 3 Series features an infrared receiver and 3.5 mm audio jack giving users added convenience and flexibility for multimedia applications. After installing the XBMC multimedia player App from ASUSTORs App Central, users will be able to use the HDMI interface to play audio and video from the NAS directly to any HDMI ready display. Further pairing XBMC with the ASUSTOR remote control (optional purchase) will allow users to freely and conveniently control all multimedia playback from their NAS. Additionally, users are also free to play the music they have stored on their NAS by connecting it to USB speakers, utilizing the audio jack or connecting the NAS to an amplifier via HDMI.

The AS 3 Series devices provides users with one of the top price-to-performance ratios in its class and are the only devices in the segment to feature high performance Intel dual-core processors and audio jacks, said Johnny Chen, Product Manager at ASUSTOR. With its combination of storage, backup, file sharing and powerful multimedia applications along with an array of industry-first features, the AS 3 Series is sure to meet the diverse demands of the market while bringing users exceptional value for their money.

All models in the series come with the ADM 2.0 (ASUSTOR Data Master) operating system, which features ASUSTORs newly optimized NAS user interface that gives users the freedom to customize their desktop background and pin their favorite applications to the taskbar for easy access. With ADM 2.0, ASUSTOR has added some exclusive new features that have never been seen before in the NAS industry. The SearchlightTM search engine supports fuzzy searches and allows users to instantly find any files, folders or Apps on the NAS. Newly added Mission Mode backup ensures that backup jobs will not be stopped because of any connection problems. It combines with ASUSTORs exclusive 2-way backup functionality to provide users with an unprecedented level of flexibility when configuring backup jobs.

Additionally, ADM 2.0 also features FTP Explorer, the first FTP Client in the world designed exclusively for use on NAS devices. FTP Explorer allows users to connect and browse any FTP sites from within the ADM user interface and execute drag and drop file transfers. FTP Explorer is available via ASUSTORs App Central V2 App Library which features over 95 unique apps along with a newly redesigned and substantially optimized interface. With ADM 2.0, ASUSTOR will also be launching two new mobile apps, AiMaster and AiData which allows users to manage and access all data on their NAS from the convenience of their mobile devices.

Key Features for the AS 3 Series:

Key Specifications for the AS 3 Series:

There are currently 760 user(s) online:
Google