Many motherboard makers claim that their AMD AM3 mainboards are compatible with AM3+ processor by BIOS upgrade. However, this method may be not stable enough to provide a reliable computing, and may result in certain effects.
In ASRock's announcement they have stated various features of their 'real' AM3+ motherboards that are not on current AM3 motherboards. Surprisingly, the only feature that isn't to do with power management is a meachanical feature overlooked by many, being that the pin holes are 11% larger in the AM3b black socket. 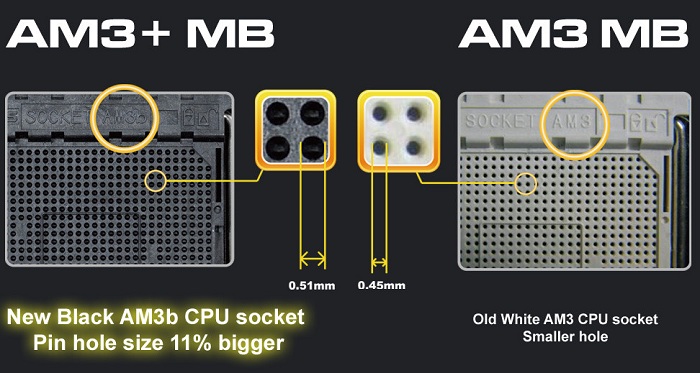 While GIGABYTE were first to announce the use of 'black socket' 8 series motherboards, the latest news from ASRock muddies the water about AM3 compatibility and stability stated by ASUS, GIGABYTE and MSI via BIOS update.
The initial controversy caused by ASUS' statement on AM3 supporting AM3+ CPUs raised many questions about support and compatibility and possible issues but any more statements on backwards compatibility was crushed by AMD at least until the release of their new processors.

Just a Marketing ploy?
Many high end AM3 motherboards are likely to be able to produce high amounts of clean power to support AM3+ CPUs but is the design difference that intrinsic to warrant the use of AM3+ CPUs on AM3 motherboards pointless? Or are these just existing AM3 8 series boards with a 'Black Socket' slapped on by AMD's demand?

A question i would raise is 'Why would ASUS announce that they are only supporting AM3+ on their higher end AM3 8 series boards via BIOS update with AM3+ socket mainstream and lower end M5 series boards to follow?'

I am sure that all will be revealed soon.

Do you have any thoughts or comments on this topic? Share them with us on the forum.