Today, a leaked schematic of an apparent upcoming ASRock motherboard shows that it will use the already established 890FX chipset but as well as AM3 support, it will also be compatible with AMD's upcoming Bulldozer platform in the form of the Desktop 'Zambezi' AM3+ CPUs, which are going to be known as 'Fusion Black' processors.

The board is named 890FX Deluxe5, and sports a very similar design to the ASRock 890FX Deluxe4, including inclusion of IDE connector and strangely placed CMOS battery. 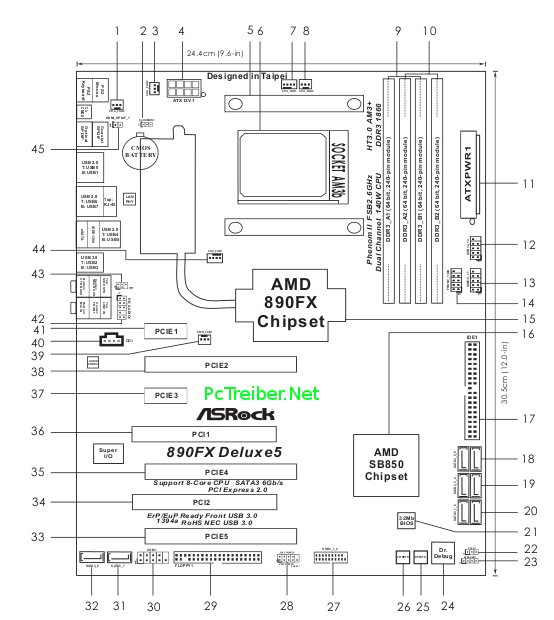 It looks as though ASRock are going to have to squeeze the release of this board in quickly, before we start to see AMD 990FX boards surfacing at the Bulldozer launch. This, indeed, begs the question - why should I even consider buying this board? It's likely to lack all the performance of the 990FX, as well as possible features such as an UEFI BIOS. The only real answer would be if you wanted to have a Zambezi-ready board to throw a CPU in right at launch, though it's likely 990FX boards will also be available at this time, give or take a few days. If it's backwards compatibility you're after, then it would be worth waiting for the 990FX chipsets since it's known they'll also support AM3 processors. Perhaps ASRock are simply looking to capitalise on a gap in the market nobody even knew was there, but one thing's for sure, it had better be out before 990FX.

This brings to light another point, and gives more weight to a persistent rumour that the recent 890FX boards will be compatible with Zambezi CPUs via a BIOS update. This rumour gained momentum when the MSI 890FXA-GD65 was printed with 'AM3+ CPU Support' below the AM3 socket on the motherboard. After several calls to MSI from members of the public asking whether it was a misprint, the definite answer was 'it's not a mistake'.

There will be plenty more on AMDs new Bulldozer as it comes, you can read all the latest here at Vortez.

What do you think of these developments? Let us know in the forums.