ASRock Up The Rhetoric In PCIe 3.0 War Of Words


Ever since Gigabyte boasted PCIe 3.0 (Gen3) support on its P67 and Z68 motherboard platforms there have been the odd question on just *how* well supported this feature was. In theory, the addition of an IvyBridge CPU on a P67/Z68 motherboard with appropriate BIOS should always result in PCIe 3.0 x16 in the first slot (so long as it is wired at x16 electrically) when a PCIe Gen3 Card is inserted. You can thank Intel bringing PCIe signalling onboard the CPU for that benefit OFC, but it does mean that - potentially - PCIe 3.0 is de-facto supported when IvyBridge is.

The issue that crops up is that on the P67/Z68 platform you're more often than not talking about an SLi compatible motherboard, which necessitates switching of the PCIe bus. Enter MSI, who in a press release last month claimed that lack of PCIe 3.0 switches and other Gen3 standard components on all Gigabyte boards baring the G1.Sniper 2 meant that those boards didn't really support PCIe 3.0. They backed it up with internal tests of a Gigabyte board and an IvyBridge engineering sample, which appeared to show that PCI signalling was in fact throttled down to Gen1 (PCIe 1.0). A detailed methodology of their test was not outlined. It was their contention that only motherboards with the proper switching, including their updated Gen3 range of P67 and Z68 motherboards, were genuinely PCIe 3.0 compatible.

Yesterday ASRock added fuel to the fire with a new Ad: 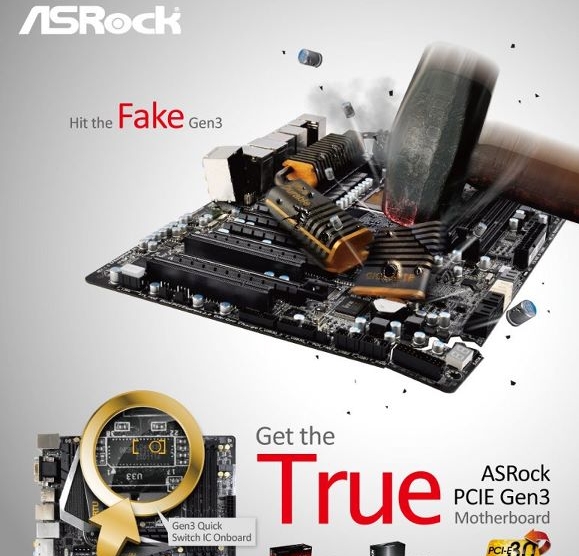 Pretty aggressive stuff from ASRock. It should come as no surprise that ASRock also have a range of Gen3 boards which they assert is fully compatible with PCIe 3.0, including the recently reviewed Fatal1ty Professional Z68 Gen3 and Z68 Extreme4 Gen3, and so very much have a horse in this race.

Gigabyte have also responded in kind, justifying their assertion that all the motherboards listed as PCIe Generation 3 compatible is valid in an internal memo.[1]

Which side is in the right? From my perspective it's not hard to see merit in the arguments of both sides, but I'm concerned that the elevated rhetoric will only serve to spook potential early adopters who might otherwise be keen to embrace the new standard. By the same token until IvyBridge is in the hands of reviewers we can't form a conclusion; we're simply not in possession of any independent evidence. With the first PCIe 3.0 enabled cards, rumoured to be the AMD HD 7000-series, still some months away and IvyBridge due whenever Intel are comfortable it's likely to be some time before this argument is settled.

There are currently 913 user(s) online:
Google