Assassin's Creed? Far Cry 4? The Crew? It's Time To Pick Your Path With NVIDIA And Ubisoft

Looking to buy a new GPU, but want that money to go just a little bit further this holiday season? Well you're in luck; today NVIDIA and Ubisoft are partnering in a new promotion involving the latter's upcoming autumn AAA titles, each of which features new high-end gaming technologies from NVIDIA Gameworks. Introducing the Pick Your Path bundle.

From today those in the market for a high-end desktop GPU can pick up an NVIDIA GeForce GTX 980, GTX 970, GTX 780 Ti or GTX 780 from participating retailers and qualify for Pick Your Path, giving them access to either Assassins Creed Unity, Far Cry 4 or The Crew at no additional cost. If laptop gaming is more your style then fret not, new laptops sold with GeForce GTX 900M graphics also qualify for the Pick Your Path bundle.

If you're on the lookout for something a little more affordable NVIDIA are also continuing their Free To Play bundle offer through Fall 2014, crediting your in-game coffers with up to $150 worth of War Thunder, Strife and Infinite Crisis currency.

Set in Paris during the French Revolution, the latest entry in the franchise sets you against the Templar's in an all new setting and updated cast of characters. You play Arno Dorian, an young man with both Assassin heritage and Templar adoptive family. Exploring his future in the past is key to unravelling the mystery of this installment. The title also features cooperative multiplayer for the first time, allowing you to complete missions with up to three of your closest allies.

Assassin's Creed Unity makes extensive use of NVIDIA Gameworks technologies for improved performance and visual fidelity optimised for NVIDIA GPUs. Building on Black Flag, Unity includes support for HBAO+, TXAA, PCSS and DirectX 11 Tessellation; combining these will greatly improve shadow detail and dynamics as well as greater geometric detail on surfaces which might otherwise appear to be flat. See the video above for examples of these technologies in action.

NVIDIA has worked hard, hand-in-hand with our development teams, to help provide the best experience for our PC players, Jean-Francois St.Amour, Lead Graphics Programmer at Ubisoft Montreal has been quoted as saying. Their support and insight is even more important now, as we make a big technological leap into the next-generation of Assassins Creed games.

Assassin's Creed Unity is released on November 11th in North America, November 13th in the UK and EU. 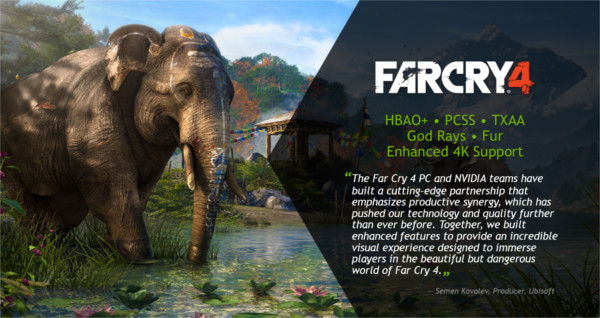 It's going to be hard to top the mayhem and menace of Far Cry 3 but their fourth outing for this top of the line franchise aims to do just that. As Nepalese Native Ajay Ghale you face off against the notorious self-appointed king Pagan Min, becoming embroiled in a civil war likely to tear the region apart. FPS gameplay and pseudo-RPG elements should be familiar to those who have played the previous title, but new features like being able to ride a elephant into battle should be enough to whet the appetite of the meanest of naysayers.

Path of the Racer: The Crew

A new franchise coming in December to all platforms, The Crew is the latest title to seek arcade racing crown. Such games have in the past been relegated to consoles, but this time around Ubisoft are pushing for a PC release which features the best visual fidelity and uncompromising gameplay to take advantage of the hardware possibilities available on the PC platform.

The Crew will feature support for HBAO+ and TXAA, matching improved shadows with excellent temporal-based anti-aliasing for a smoother and more visuall pleasing gameplay experience. It will also unlock G-SYNC Surround, allowing users with multiple G-SYNC monitors the opportunity to sync output frame rates with monitor refresh rates across their whole monitor array. Those who recognise the importance of running at 60FPS on non-G-SYNC monitors when seeking immersion will understand the potential for G-SYNC with such a wide field of view.


For more information on the Pick Your Path bundle check out NVIDIA's blog. Pick Your Path code redemption and full Terms and Conditions can be found here. This offer is set to expire on the 31st January 2015.