ASUS today announced the M70 Desktop PC with the latest 4th generation Intel® Core processor for improved performance and graphics for the most demanding of tasks, and Near Field Communication (NFC) technology for wireless pairing with Android-based devices. The M70 allows users to log onto the PC and launch applications via NFC, while photos in mobile devices can also be backed up wirelessly with a simple tap. 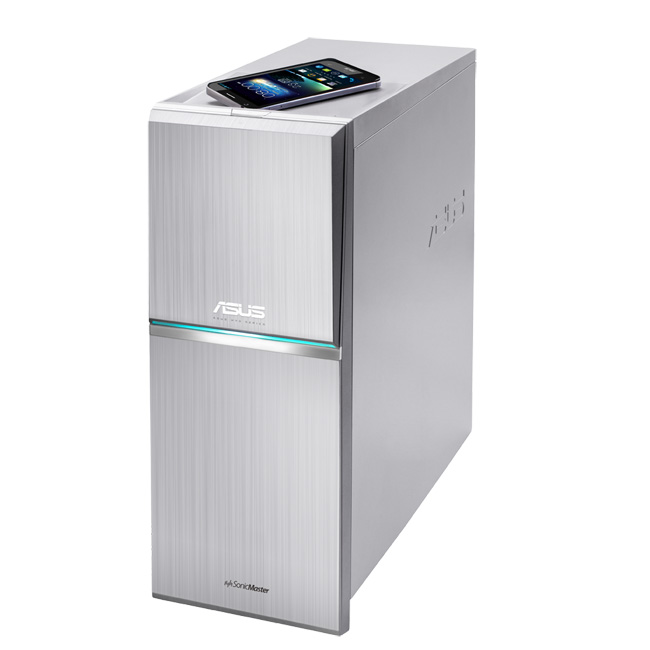 ASUS M70 features SonicMaster Technology, and together with MaxxAudio® from Waves, recipient of a Technical GRAMMY® Award, provides users with immersive and impactful audio. The M70 can also charge mobile devices wirelessly, while a built-in UPS acts as a power supply for the PC in the event of a power outage.

The ASUS M70 desktop PC is available with the latest 4th generation Intel® CoreTM i3/i5/i7 dual-core processors for productive multitasking and energy efficiency, users have the option to pair that with a variety of NVIDIA® GeForce® discrete graphics cards (up to GTX650) to tailor the M70 for their multimedia needs.

ASUS SonicMaster audio technology, together with MaxxAudio® from Waves, recipient of a Technical GRAMMY® Award, gives immersive and impactful audio delivery for a cinematic entertainment. The M70 also comes with the ASUS AudioWizard interface, allowing them to tailor sound settings with five modes for music, movies, games, voice recording, and speech. The M70 features an aggressively angled tower case with a polished metal finish. LED indicators housed within the chassis reflect the operational state of any attached external USB storage device.

The ASUS M70 features NFC technology for convenient wire-free pairing of desktop PCs with Android smart devices, this gives users the ability to log into Windows, share content, and launch applications with a simple tap of their mobile device.

The ASUS-exclusive NFC Express software automatically backs up photos and videos in Android mobile devices on the desktop. It can also detect and only backup files added since last sync. Quick Launch saves shortcuts to favorite apps, which can then be started with the ease of a single tap. NFC Express also allows for password-free Windows 8 login, so users can go directly into the operating system.

The ASUS M70 has a built-in Uninterruptible Power Supply (UPS) that automatically kicks in whenever power to the machine is cut. The UPS will supply power to the M70 to save all data and programs into the hard drive before entering hibernate mode.

The M70 also features an ASUS Wireless Charger tray for wireless recharging of smartphones and tablets that support the Qi inductive power standard even when computer is shut down. ASUS Ai Charger is a utility that provides faster recharge times for your mobile devices through USB 3.0 even when the M70 is shut down.

The M70 has the ASUS Universal Storage Module (USM), a hot-swap drive bay that makes it easy to add and share high-capacity storage. The industry-standard USM interface is around twice as fast as USB 3.0 and cartridge-based drives can be also connected to any computer via a USB adapter.

ASUS computers reflect a tradition of the finest quality, innovation and longevity. Based on the PCWorld USA 2012 reader survey of tech satisfaction, reliability, and service, users ranked ASUS as a leading choice for desktop PCs, citing high satisfaction with their value, connectivity, ease of use and reliability. The survey also found ASUS desktop PCs were one of the most likely to be recommended to others.