The cryptocurrency mining boom shows no signs of slowing down, and ASUS are keen to catch the eye of all the pioneers in the field with a brand new motherboard tailored to throwing immense GPU horsepower at the problem. Designated the B250 Mining Expert, it's the world's first motherboard with nineteen (yes nineteen) PCI-Express slots, among other innovations.

Based on the Intel B250 chipset for 6th (Skylake) and 7th (Kaby Lake) Generation Core CPUs, the B250 Mining Expert sits in an a beguiling ATX form factor - although one suspects that it will spend very little time in a conventional chassis. A standard LGA1151 socket is paired with two DDR4 DIMMs rather than the usual four, emphasising the stability of Intel's desktop computing platform when just two DIMM slots are populated. Cryptocurrency mining isn't particularly taxing on system memory capacity, so that's unlikely to be a real down-side. Furthering the effort is a re-engineered BIOS to ease the setup process and provide robust diagnostic tools in the event of a component failure.

Of course, the B250 Mining Expert's real USP are those PCI-Express slots. Arrayed in banks of three down the board, each of the eighteen PCI-Express x1 slot can support a discrete graphics card, exploiting the fact that mining isn't PCI-Express bus bandwidth limited. An additional x16 PCI-Express slot puts the total number of supported cards for this one motherboard up to 19, all in the furtherance of crunching through that algorithm.

Current NVIDIA and AMD drivers effectively cap the number of discrete GPUs available to one system at eight each, for a total of sixteen. However, as noted in ASUS's article accompanying this hardware launch, AMD are currently working on a driver that will remove the limitation and allow all slots to be populated with AMD cards. This driver is currently scheduled for Q4 2017, and is being developed in cooperation with ASUS.

Supporting so many GPUs requires an immense amount of power to the PCI-Express slots, even if many of the cards themselves also include discrete power inputs. Supplying power on the B250 Mining Expert are three 24-pin motherboard power connectors (EATXPWR) rather than the usual one, plus three additional 4-pin molex aux. power connectors, allowing the board to be powered by three normally-configured PSUs. By plugging each GPU's PCI-Express extender into the bank of slots that correspond with its PSU startup should remain seamless, and this solution will allow straightforward scaling to ever greater GPU numbers. 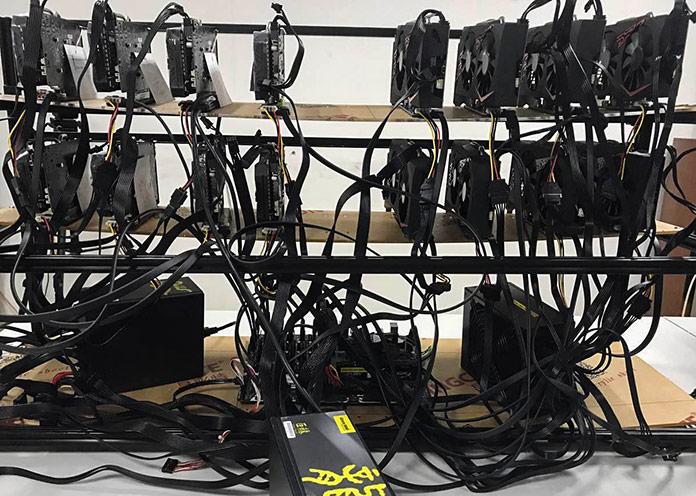 All this barely scratches the surface of the B250 Mining Expert's capabilities. To learn more check out ASUS's own primer, which also details some of the advanced diagnostic tools and configurations options all designed to improve stability, reliability, scalability and ease-of-use. The motherboard is available now in the UK with an MSRP of £154.99 inc. V.A.T.

There are currently 731 user(s) online:
Google