the first 28nm design from NVIDIA® comes in a complete package by way of the ASUS GTX 680 graphics card, featuring true next generation power and all-new NVIDIA® GPU Boost frequency modulation. ASUS GPU Tweak helps gamers and overclockers make the most of this powerhouse card through a flexible and intuitive interface, while NVIDIA® Adaptive Vertical Sync promotes smoother games with all details set to maximum. NVIDIA® 3D Vision® also returns, improved by 28nm efficiency and power. 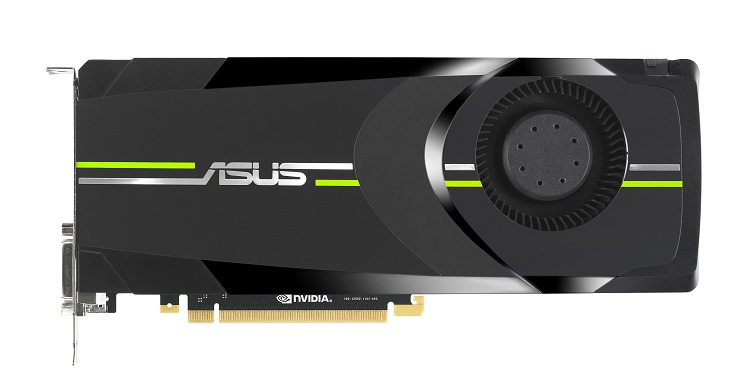 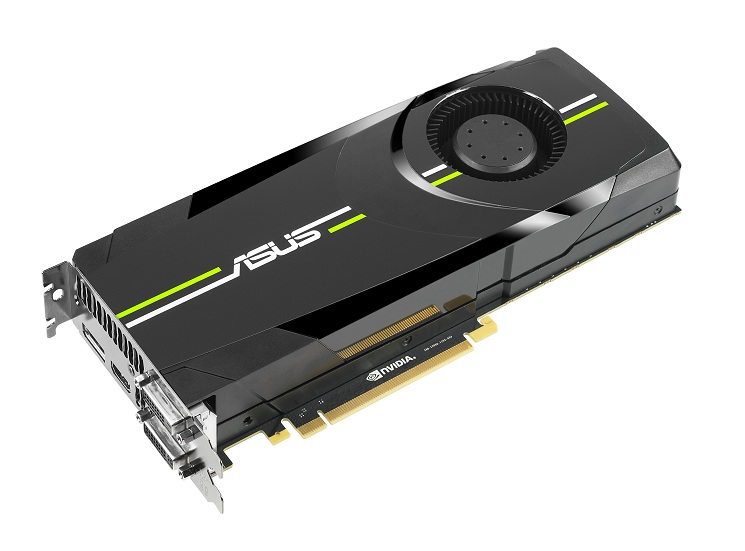 Harness the latest NVIDIA® GPU technology
Based on the 28nm Kepler architecture, the ASUS GTX 680 delivers unmitigated DirectX® 11 performance and full readiness for the next phase of PC entertainment, which will take gamers and multimedia consumers beyond full HD. Due to its ample processing power, the GTX 680 can handle ultra HD or 4K resolutions in games and video, extending visual finesse and quality beyond current standards. At the same time, 28nm GPU fabrication means reduced power consumption, leading to a modest 195W TDP under load. With its 1536 CUDA cores, the GTX 680 offers enhanced general processing GPU output to speed up overall system performance. It ships with a 256-bit memory interface and 2GB of GDDR5 clocked at 6008MHz actual. Dynamic NVIDIA® GPU Boost modulation means the card can alternate between the base 1006MHz and the sped-up 1058MHz mode when extra frames per second are needed in the most demanding games. This flexible design is further improved upon by ASUS through the presence of exclusive GPU Tweak.

Real time intuitive tuning improves graphical fidelity
ASUS GPU Tweak has established a firm reputation among gamers and overclockers as the most flexible and intuitive graphics tuning suite on the market. It has always been founded on increasing GPU versatility via unlocking a wider clock speed range, and therefore blends in seamlessly with the new GPU Boost design from NVIDIA®. GPU Tweak allows overclockers to get the most out of the powerful hardware of the GTX 680, with its intuitive and accessible interface putting all resources within easy reach. It can safely overclock the GPU beyond reference specifications, while for better benchmarks the suite offers 2D/3D mode locking. Gamers can also pull up an on-screen widget for at a glance card monitoring. GPU Tweak keeps the GTX 680 current at all times with live driver and BIOS updates as they become available.

With instant clock modification built into the card BIOS and added to through the flexibility of GPU Tweak, the GTX 680 comes ready for in-depth overclocking and tuning out of the box.

Smoother and richer gaming with Adaptive Vertical Sync and 3D Vision
The GTX 680 serves as the launch vehicle for new NVIDIA® Adaptive Vertical Sync technology, which automatically compensates for frame rate fluctuations in-game via use of intelligent vsync activation and moderation. Based on actual frame rates, the GTX 680 can turn vsync on or off, ensuring smoother visuals and reduced stutter in even the most intense games as a result of better GPU resource management. The technology also frees gamers from the need to manually turn vsync on and off in different games.

The GTX 680s augmented power also helps drive improved single-GPU 3D gaming, with stereoscopic NVIDIA® 3D Vision® now compatible with hundreds of PC titles, many of them designed to make the most of it from the ground up. 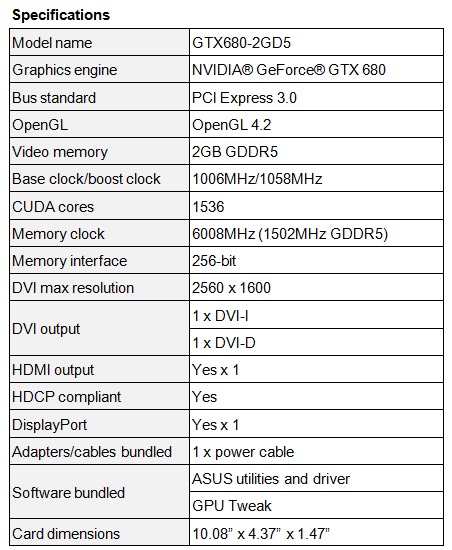 Product specifications and features may change without prior notice.
Check http://www.asus.com for further details.