New ASUS HD6970 and HD6950 graphics cards field the latest graphics cores from AMD, dubbed Cayman. These are super-powered GPUs custom-made to enable DirectX® 11 and Windows® 7-optimized gaming in resolutions above 1920 x 1200 with all advanced features turned on in-game and with impressive frame rates. Offering an irresistible combination of design and performance to power users and PC gaming enthusiasts, ASUS improves on the reference design with factory overclocking out of the box for superior performance. The new cards further use exclusive ASUS overvolting interface Voltage Tweak for 50%* faster clock speeds. ASUS has also implemented more heat-efficient materials in construction, contributing to better cooling and therefore enhanced output tolerances.

Product highlights
The ASUS HD6970 Cayman XT gets its core set to 890MHz and video memory to a massive 5.5GHz at the factory, while the ASUS HD6950 Cayman PRO arrives factory-overclocked to 810MHz on the core and 5GHz on the video memory. Tested and verified stable, these overclocks give users all the benefits of faster performance  such as extra frames per second and no slow-down even during intense action sequences in games  while never compromising product reliability and longevity.

ASUS exclusive and popular overvolting interface Voltage Tweak is incorporated in both the HD6970 and HD6950. Gamers and hardcore tuners can boost clocks by 50%* with proper cooling support. This is a phenomenal increase, and one that is sure to come in handy for competitive overclockers and those truly dedicated to pixel-perfect PC gaming.

The ASUS HD6970 and HD6950 come with innovative features from AMD, including Eyefinity, HD3D and EyeSpeed technologies.

 AMD Eyefinity technology comes standard on both models, enabling the connection of up to six** displays to a single graphics card. This results in huge viewing real estate, offering an ideal platform for immersive gaming and expanded productivity.

 AMD HD3D technology creates new exciting possibilities with 3D visuals in PC games, movies, video content and even photos. The power of these new cards means the 3D effect renders in sharp detail and with no lag. 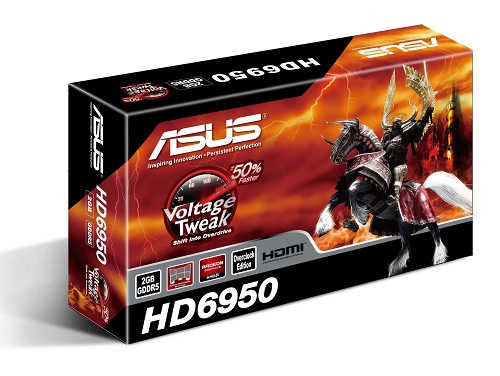 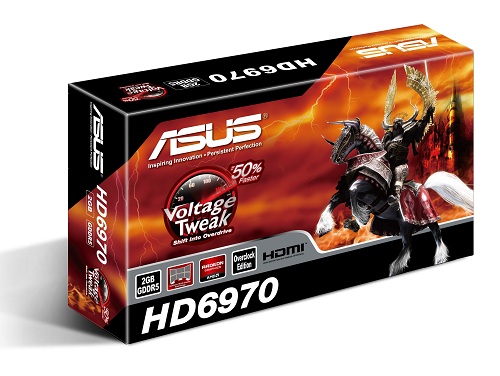