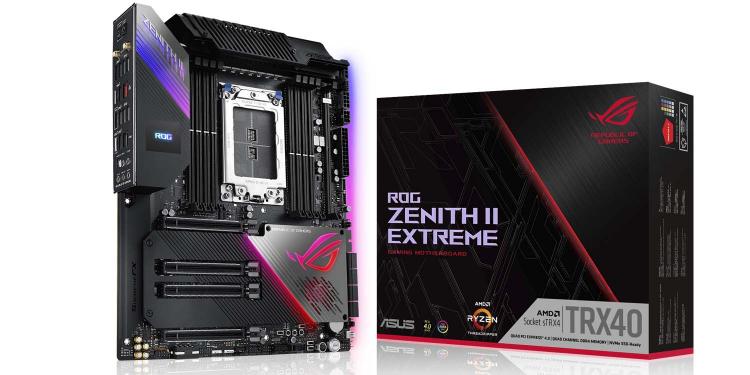 As the third-generation Ryzen Threadrippers got launched, ASUS also launched its flagship TRX40 motherboard  the ASUS ROG Zenith II Extreme motherboard. ASUS deemed it the best overclocking ASUS motherboard for the beastly 32-core Ryzen Threadripper 3970X processor. ASUS teamed up with professional hardcore overclockers to break records and to display ASUSs leadership in high-performance motherboards for record-breaking overclocking. The ROG Zenith II Extreme shattered a variety of records at CPU frequencies exceeding 5.5GHz on all 32 cores. See the list of broken records below

Jeong Soonho, known as safedisk in HWBot, used the ASUS ROG Zenith II Extreme with the Ryzen Threadripper 3970X processor and a liquid nitrogen cooler from Kingpin Cooling, and smashed three of the most envied records below:
Geekbench 3
GPUPI for CPU 1B
CINEBENCH R15

All records are listed in the table below. Two records have been removed as it was surpassed by the time of this writing.

The ASUS ROG Zenith II Extreme is perfect for professional users and gaming enthusiasts looking to explore the limits of third-generation Ryzen Threadripper CPUs core and memory clock speeds. Its filled to the brim with top-notch hardware to satisfy the most demanding users. The Zenith Extreme II sports multi-zone Aura RGB LED lighting, a decorative panel atop the I/O shield with holographic Infinity Lighting motif, while a full-colour LiveDash OLED display can display POST codes or customized for monitoring.

The ROG Zenith II Extreme employs an enhanced 16-power-stage VRM design, suitable for the most extreme overclocking efforts. Its massive main VRM heatsink sports two semi-passive cooling fans that activate when VRM temperature reaches 60°C and above. The main VRM heatsink is connected to an auxiliary heatsink hidden under the I/O shield with a heat pipe which also comes with a cooling fan. Another fan is also located on the chipset heatsink that cools the chipset along with the M.2 slots. Every fan on the motherboard is controlled by the Fan Xpert 4 utility.