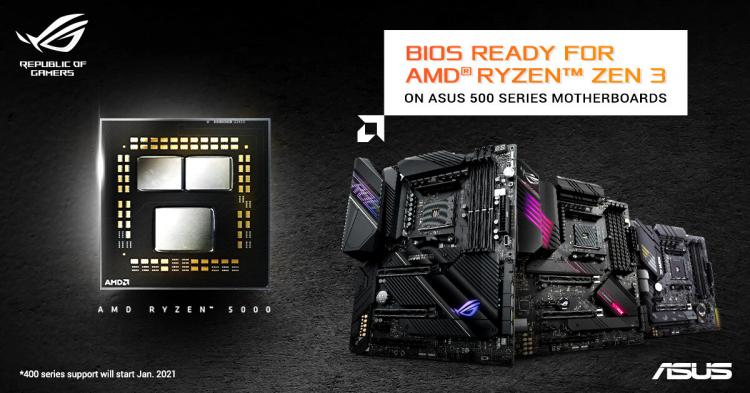 As we reported on Monday, ASUS and ROG - Republic of Gamers are refreshing their 500-series motherboards with a trio of new models to complement the upcoming launch of AMD's Ryzen 5000-series CPUs. By virtue of ongoing support for Socket AM4, motherboard manufacturers and AMD themselves are combining their expertise to unlock forwards and backwards compatibility for the 500-series and Ryzen 5000-series, which means that existing models already in the hands of retailers and consumers can be updated to support the new Zen 3 designs. ASUS have now also divulged more detailed information on that UEFI BIOS availability.

The vast majority of ASUS and ROG X570, B550 and A520 motherboards now have a BIOS update available (see table below) that unlocks support for Zen 3 CPUs, including all four models launching on November 5th. Their new motherboards - the ROG Crosshair VIII Dark Hero, TUF Gaming X570-Pro (Wi-Fi) and ROG Strix B550-XE Gaming WiFi - are scheduled for later this month and will be compatible straight out of the box. Be aware however that some older CPUs - notably the Zen+ Ryzen 2000 / 3000G-series and earlier processors - will continue to lack support on the B550 and A520 chipset.

Another much-discussed aspect of Ryzen 5000-series support has been backwards compatibility with older 400-series motherboards. ASUS had already confirmed that selected models would receive a BIOS update for 5000-series compatibility, and have now provided a time-frame of January 2021 for those updates. Although a disappointment to some early-adopters looking for the most affordable day-1 upgrade, it's still something of a blessing that these models will support the final AM4 processor range at all.

Bear in mind when planning your 400-series BIOS flash process that some older Ryzen processors are likely to be unsupported on the latest BIOS. Comprehensive troubleshooting guides are likely to be issued by the motherboard manufacturers when those BIOS updates are available. 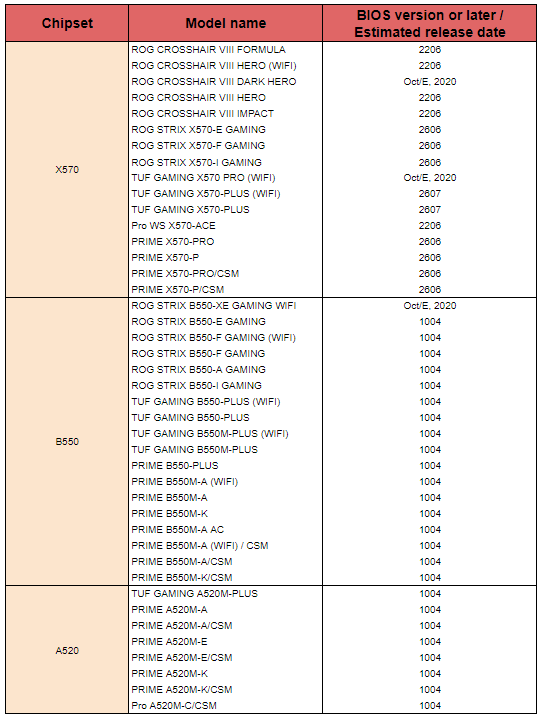 The above is a comprehensive list of UEFI BIOS for Ryzen 5000-series support on the ASUS 500-series motherboard range. Each should now be available to download direct through their regional product support sites or ASUS.com.