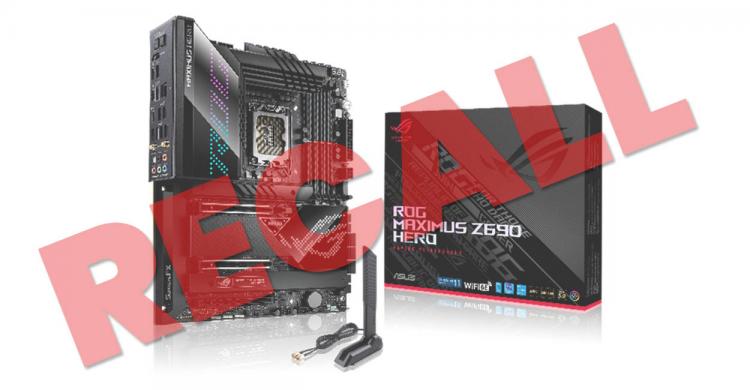 The ASUS Republic of Gamers announces a recall for the ROG Maximus Z690 Hero motherboards due to fire and burn hazards. A batch of ROG Maximus Z690 Hero motherboards has been identified to have a faulty capacitor installed in the reverse position. This may lead to short circuit, overheating or melting thus posing potential fire and burn hazards. ASUS will be offering users of the motherboard a replacement.

ASUS is committed to producing the highest quality products and we take every incident reported from our valued customers very seriously with immediate action. We value your safety and thank you for your patience while we work through this with CPSC.
Statement from ASUS ROG North America

As of this writing, the recall announcement can only be read in ASUS ROGs North America social media channels. ASUS ROG social media channels from other regions are yet to make an announcement if there are also ROG Maximus Z690 Hero motherboards with the same problem sold on their region. It appears that the recall is only for motherboards sold on ASUSs partner retailers the United States namely BestBuy, Newegg, Micro Center, and Amazon from October 2021 through December 2021.

How to Check if your ROG Maximus Z690 Hero motherboard is affected by the issue?

This recall involves ASUS ROG Maximus Z690 Hero computer motherboards sold separately for computers. The recalled motherboards have part number 90MB18E0-MVAAY0. Affected units have a serial number that starts with MA, MB, and MC, which indicates the manufacturing year in 2021. The part number is located next to the 24-pin power connector on a white label on the bottom side of the motherboard and on the packaging. ASUS created a dedicated landing page for the ROG Maximus Z690 Hero issue where users can check if their motherboard is affected.

More information about the recall can be read from the United States Consumer Product Safety Commissions website at cpsc.gov.