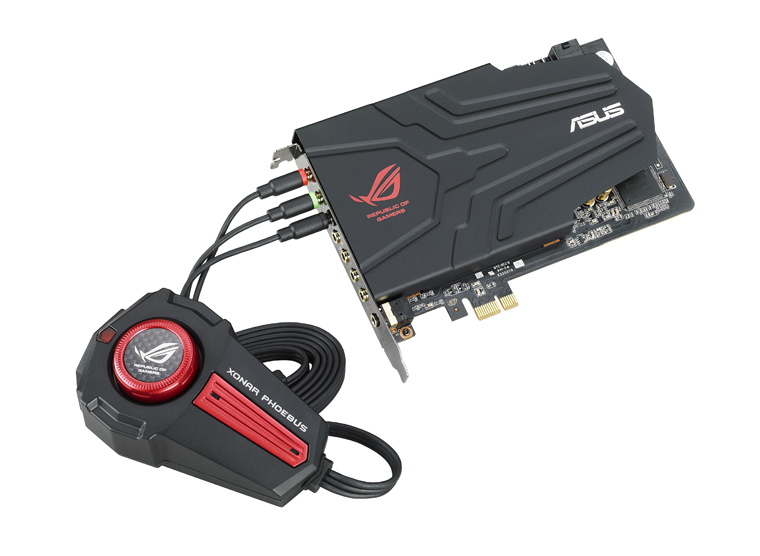 ROG originally revealed the ROG Xonar Phoebus back at CES, and now after a few months of tweaking its finally ready for your PCs.

Gamers often face noisy conditions that drown out voices during online multiplayer gaming. This creates lack of clarity and confusion within squads, leading to lower win ratios. Exclusive ROG Command technology offers the worlds first design to specifically bring noise cancelation to a gaming soundcard set, as designed by the Xonar team. Intelligent sound detection algorithms and array microphones (two on the dedicated control box) enable up to 50% ambient noise reduction, effectively turning loud locations such as LAN parties into something as quiet as a lab. The technology works equally well whether using an external microphone or the microphones embedded into the ROG Xonar Phoebus control box. Gamers benefit from being able to communicate and coordinate with team members clearly and with greater precision, adding to enjoyment and win ratios.

Since many gamers choose headphones to refrain from disturbing others while insisting on the best sound quality and privacy, ROG and Xonar teams integrated the top-flight TPA6120A2 headphone amplifier on ROG Xonar Phoebus, driving up to 600 ohm impedance for genuinely impactful headphone output.

Clad in the trademark ROG red and black color scheme, the ROG Xonar Phoebus control box offers gamers improved response and convenience. Connected to the card via the back I/O, the control box can be placed on the desk so it remains within easy reach. Gamers can then adjust volume and mute quickly without bringing up game or operating system menus, or having to hunt around for display remote controls. The control box further offers microphone and headphone connectors, making connections easier.

ASUS, the worlds top 3 consumer notebook vendor and the maker of the worlds best-selling and most award winning motherboards, is a leading enterprise in the new digital era. ASUS designs and manufactures products that perfectly meet the needs of todays digital home, office and person, with a broad portfolio that includes motherboards, graphics cards, optical drives, displays, desktops, Eee Box and all-in-one PCs, notebooks, netbooks, tablet devices, servers, multimedia and wireless solutions, networking devices, and mobile phones. Driven by innovation and committed to quality, ASUS won 3,886 awards in 2011, and is widely credited with revolutionizing the PC industry with the Eee PC. With a global staff of more than 11,000 and a world-class R & D team of 3,100 engineers, the companys revenue for 2011 was around US$11.9 billion.

The ASUS Republic of Gamers was created in 2006 in response to gamers and hardcore enthusiasts who requested more from their hardware. Since its creation, ROG has grown into a brand known for high quality and is an active participant in both gaming and overclocking events around the world, including QuakeCon, BlizzCon and Dreamhack. In the past five years, numerous overclocking records have been broken with ROG hardware and worldwide media have earned the brand over 1,200 awards and accolades. Adhering to the principle of The Choice of Champions, the ROG lineup includes motherboards, graphics cards, notebooks, desktops, mice and audio solutions, all designed to give gamers and enthusiasts the edge to win. To learn more, visit ROG at http://rog.asus.com.

There are currently 1030 user(s) online:
Google