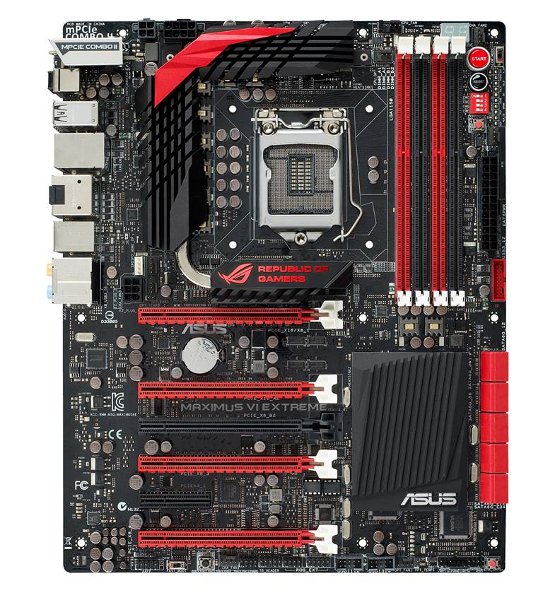 Information is continually coming out in advance of the Intel 8-series platform launch expected to coincide with the release of Haswell in June, with manufacturer's seeking to steal a march on competitors. In this vein ASUS have released images and details of their upcoming 8-series motherboards, beginning with the performance/gaming targeted Republic Of Gamers Maximum VI Z87 range. ROG designs retain their distinctive black and red livery for another year, ensuring that as far as the aesthetics are concerned it's likely to be a hit.

The top-end of the range is the Maximus VI Extreme (shown above), an ATX affair which nonetheless includes space for up to four GFX cards in the red PCI-E 3.0 x16 slots, although it's not clear if they are all wired for x16 or some for x8 only. These slots have associated dip-switches for disable individual cards for troubleshooting purposes, a god-send for rigs with water-cooler GPUs. In order to accommodate four GFX cards into a limited form factor the top-most slot will be a little close to the CPU socket, which may cause a few compatibility issues with the widest CPU coolers on the market.

The board is powered by 8-Pin and 4-pin EPS 12V supplies in their ideal locations, which most high quality PSUs should be compatible with. Auxiliary PCI-E power is provided through one 6-pin connector if required, although generally it's only really necessary on systems with more than three GPUs. Overclockers and others with test-bench systems will appreciate the on-board power and reset switches which are swiftly becoming standard on performance motherboards. 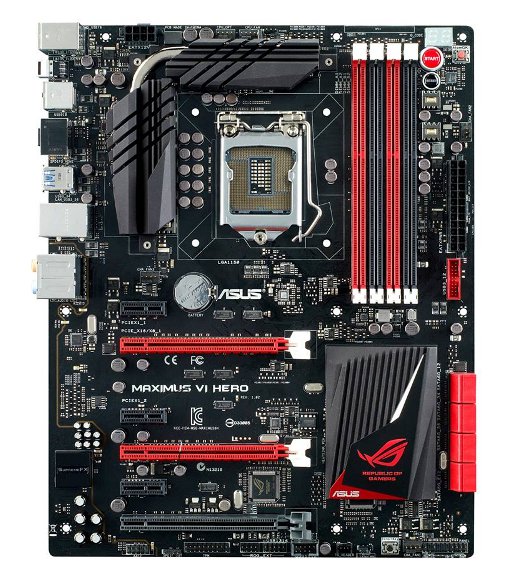 Up next is the Maximus VI Hero, which one supposes would be the entry-level of the range and is immediately recognisable thanks to the less elaborate VRM cooling restriction to two performance-indicated PCI-E 3.0 slots for single x16 or x8/x8 operation. Also sacrificed are a couple of SATAIII slots (down from ten to eight), but with the exception of these high-end features you seem to be getting a very solid gaming platform with overclocking potential. Also included is ASUS's SupremeFX onboard sound, which appears to have been swapped out for a discrete solution in the Extreme. 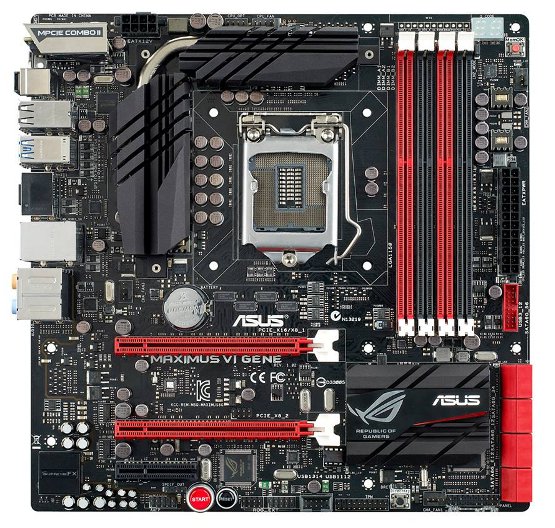 Finally there is the mATX Maximum VI Gene, which like all the mATX performance boards aims to cram as much into the diminutive form factor as possible. The Gene doesn't appear to have a 'killer app' per se, relying on being feature rich and allowing SLI/CrossfireX on mATX such that it's a no-compromise solution for those who with to have smaller system footprints. As with the Hero it also features SupremeFX audio, which should reduce the need for a slot-occupying discrete audio solution.

All three motherboards in the Maximus VI range also include an MPCIE COMBO II slot. This space-saving propriety feature acts as a riser for mSATA and mPCIE for the option of adding both an mSATA caching SSD and wireless networking module, the latter of which appear in the form of 802.11ac and Bluetooth for Maximus VI Gene and Extreme SKUs.

Obviously it's too early to tell pricing, and this would likely depend on competition and exchange rates at the time of release. Furthermore, features observable on the motherboard will barely scratch the surface of total package capability if previous Maximus designs have been anything to go by. ASUS are also releasing the thermal armoured TUF and Classic Z87 range at launch, so it's likely to be a very busy market. Either way, it's a promising beginning for Z87 with ASUS.