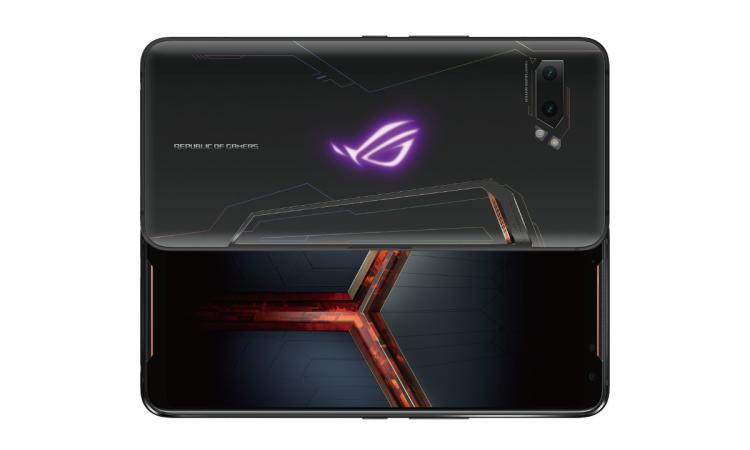 The IFA consumer electronics trade show begins this week in Berlin with major manufacturers and big name brands showcasing their latest innovations in a wide range of sectors. One such manufacturer is ASUS, who are demonstrating cutting-edge laptops in the professional, enthusiast and gaming segments alongside the ROG Phone II that was unveiled in July. For many the highlight will be prototypes of ROG gaming laptops featuring a brand new 300Hz panel that laughs at the mere 240Hz panels of their competitors, but also included are ProArt StudioBook series models for content creators and the first designs with Intel 10th Generation Core CPUs.

A Powerful Need For Speed

ASUS ROG have long been at the bleeding-edge of panel technology for laptop gaming. They were the first to introduce 120Hz IPS panels in 2016 with the G752VS, and a development partnership with Merck allowed ROG to push the envelope even further with 144Hz screens on the G703 desktop replacement. Earlier this year the team showcased their 240Hz solution at CES inside a Strix SCAR II, later rolled out into production models in both the Strix and Zephyrus ranges. Not only do they cover the common 15.6inch footprint, but also the heftier 17.3inch implementation. And all that groundbreaking work is setting the stage for a new development set to be available this October. 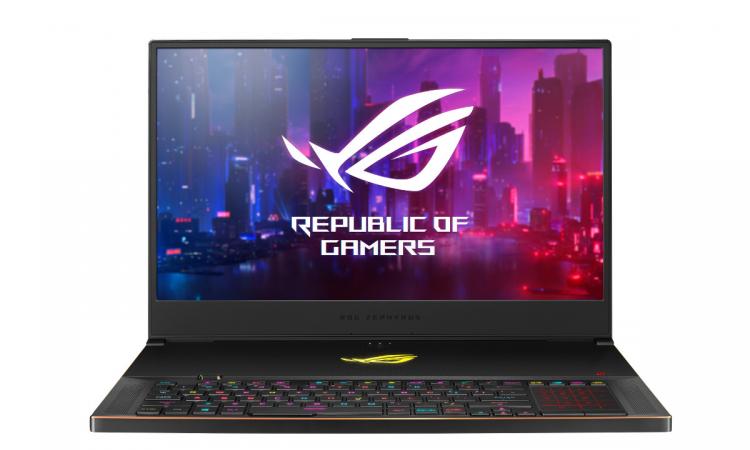 Following the ethos that 'every frame matters', ROG are pushing ahead with a 300Hz panel to be introduced with the Zephyrus S GX701. This represents a 25% increase in frame rates over the prior generation, and could turn out to be the weapon of choice for esports gamers. Pushing that many frames is a tough challenge eEven in the typically less taxing world of esports games, which is why the Zephyrus S GX701 is equipped with an NVIDIA GeForce RTX 2080 clocked at up to 1230MHz in 100W power modes. Integration of NVIDIA's G-SYNC technology also maintains a refresh rate synchronised to the panel, reducing tearing and frame latency.

A 300Hz panel will refresh every 3.3ms, so it's convenient that the gtg pixel response time of the new panel is a nippy 3ms. Furthermore, Zephyrus retail implementations come pre-calibrated to meet PANTONE Validation requirements.

ASUS ROG's Zephyrus laptop line are the sleeker models due to their ultraslim dimensions, but the 300Hz panel is also present in chunkier ROG Strix SCAR III prototypes demoing at IFA. These powerful 15" and 17" designs are augmented by NVIDIA's GeForce RTX 2070 GPU clocked at up to 1540GHz in a 115W power mode, helping them reach the astronomical frame rates required for optimum performance.

ASUS ROG's Zephyrus S GX701 featuring a 300Hz display will be available from late October in the UK from the ASUS EShop and all online e-tailers.

The requirements of today's laptop user, even in the relatively niche ROG performance lineup, is much more varied than you might expect. With that in mind ASUS are also introducing other new technologies that will suit a wider role in the gaming and enthusiast segment.

Computex 2019 saw the unveiling of 4K UHD laptop displays running at 120Hz, and while they're destined for as-yet unannounced products the ROG Mothership hybrid design is available with 4K panel calibrated for the full Adobe colour gamut. If HDR if more your wheelhouse then you'll be interested to see the special editions of the Zephyrus S GX531 and GX701 that combine combine high refresh rates with VESA DisplayHDR 400 certification, a technology so new that the generalised API for a laptop implementation hasn't been released yet.

But enough about panels. Intel's 10th Generation Core CPU is finally here, bringing with it new performance, features and battery life figures for a vast range of consumer and business markets. ASUS aren't messing around; this new processor range is being integrated into new models from the ASUSPRO B9, ZenBook Duo, ZenBook and ZenBook Flip families. 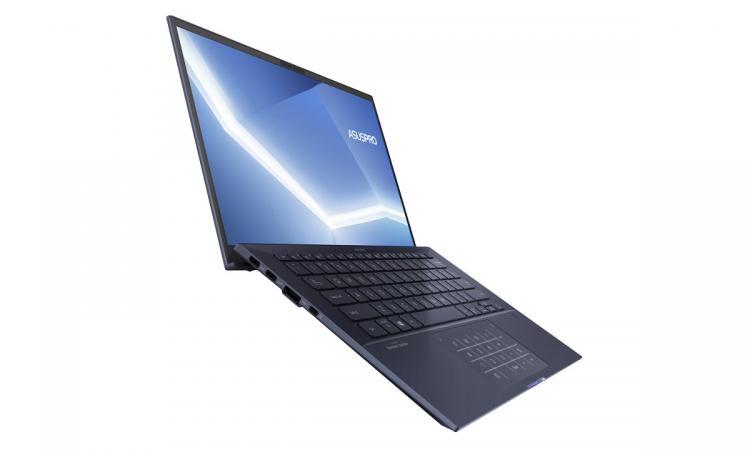 Billed as the world's lightest 14-inch business laptop, ASUSPRO B9 mobile systems incorporate dual PCIe 3.0 x4 NVMe SSD storage (RAID 0 & 1), and are now powered by an up to Core i7 10th Generation Intel CPU. Intel Wi-Fi 6 (802.11ax) and Thunderbolt 3 connectivity options round out an impressive feature list for such a compact model, one that's built to US military-grade durability standards.

ZenBook Duo with ScreenPad Plus

ZenBook Duo is a ultraportable laptop featuring the new ASUS ScreenPad Plus, a full-width secondary touchscreen as a unique tool for creative professionals and those interested in developing new ways to enhance productivity workflows through multitasking. The ScreenXpert software includes a wide selection of useful apps, tools and utilities that allow users to easily enjoy this novel secondary display. Raw hardware specifications include up to 10th Generation Intel Core i7 processor, up to NVIDIA GeForce MX250, PCIe SSD storage and Intel Wi-Fi 6 connectivity. 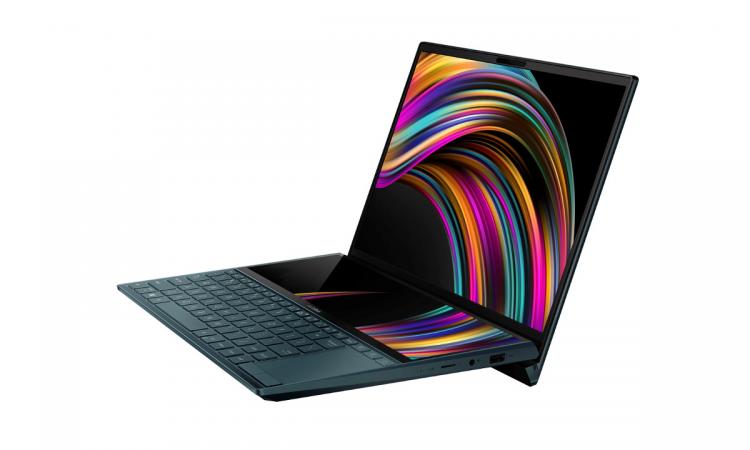 The ZenBook series is now equipped with up-to 10th Generation Intel Core i7 CPUs and features the ScreenPad 2.0, a secondary touchscreen with intuitive new smartphone-like interface. All models in the series feature a four-sided frameless NanoEdge display, with up to a 95% screen-to-body ratio for exceptionally compact footprint. Other components include up to NVIDIA GeForce MX250 graphics, PCIe SSDs and Intel Wi-Fi 6 connectivity.

A new colour, Icicle Silver, is also introduced for the new models.

The new ZenBook Flip 15 and ZenBook Flip 14 convertible laptops now also feature the ScreenPad 2.0. A slim-bezel NanoEdge touchscreen on both models ensures compact dimensions, plus the ZenBook Flip 15 features a PANTONE Validated version of the screen with a Delta-E of <2 that delivers high colour accuracy for content creators.

In addition to the latest 10th Generation Intel Core i7 processor, the ZenBook Flip 14/15 with ScreenPad 2.0 models are equipped with up to NVIDIA GeForce GTX 1050 Max-Q GPUs, PCIe SSD storage and Intel Wi-Fi 6.

Rounding out the ASUS laptop announcements are a pair of major additions in the ProArt StudioBook Series for businesses.

The 15-inch ProArt StudioBook One (W590) is the series flagship and the first creative laptop to be powered by NVIDIA Quadro RTX 6000 graphics and an Intel Core i9 processor. It features a 4K UHD PANTONE Validated display with exceptional Delta E<1 colour accuracy, making it ideal for virtual production, real-time 8K editing, data analytics, CAD design and simulation, and other data-heavy workloads. Its Quadro RTX GPU is decked out with CUDA, Tensor and RT cores, making it an ideal platform for current and upcoming hardware-accelerated GPU toolkits. 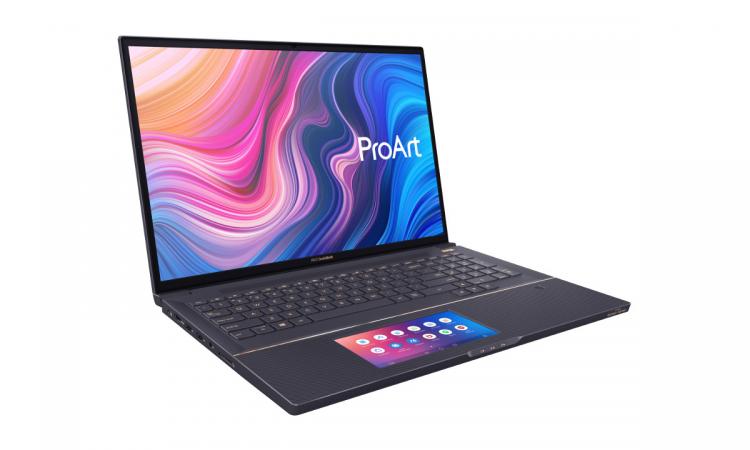 The ProArt StudioBook Pro X (W730) meanwhile is the first Quadro-powered laptop with both 4-sided Nanoedge display and ScreenPad 2 secondary display. It's powered by Quadro RTX 5000 graphics and 9th Generation Intel Xeon or Core i7 processors and also incorporates Thunderbolt 3 ports, Wi-Fi 6 and the option of CPU-attached PCIe storage.

These are just two models in the comprehensive ASUS ProArt StudioBook lineup that includes models equipped with differing levels of NVIDIA GPU hardware support - from GeForce RTX 2060 up to Quadro 5000 Max-Q graphics.

ASUS ProArt StudioBook series laptops will be available from October, vendors and pricing will be confirmed at a later date.

Coinciding with the announcement of ASUS ProArt StudioBook series laptops is the I Am ProArtist campaign, a competition to reward participants in three different categories around graphic design, film production and 3D design. The final arbiter will be the public through an open voting system, and winners could walk away with prizes such as ProArt monitors, a ProArt PA90 Mini PC and ProArt StudioBooks.

This contest, available globally, is open right now and closes on September 30th 2019.