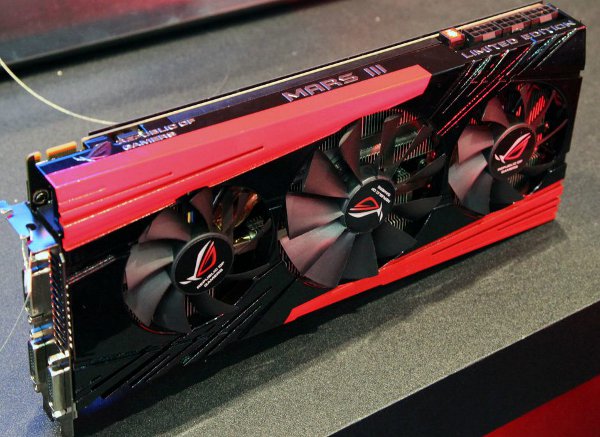 VR-Zone have been busy getting shots of pretty much everything electronic at Computex Taipei this year, and one of the products on display which leapt out is the dual-GK104 ASUS ROG MARS III.

Enthusiasts will immediately recognise the ASUS MARS branding; the original MARS was a dual-GTX 285 card, whilst the MARS II featured two GTX 580's on one board. All the cards in the MARS range are limited edition and priced to match, but for the money you gain a card with full-fat GPU's factory overclocked and with the power infrastructure to push the card yet further. However the MARS III goes a step further.

The triple-fan, but dual-slot, ROG MARS III features two GTX 680 GPU's and is expected to be clocked to at least to the level of a stock 680: 1006 MHz core and 6008 MHz memory. Somewhat surprisingly the card will have 8GB GDDR5 RAM (4GB per GPU), making it suitable for very high resolutions and image quality levels. Powering this will be three 8-Pin PCI-E connectors, allowing the card to consume up to 525W if necessary (though it's pretty unlikely to eat that much). 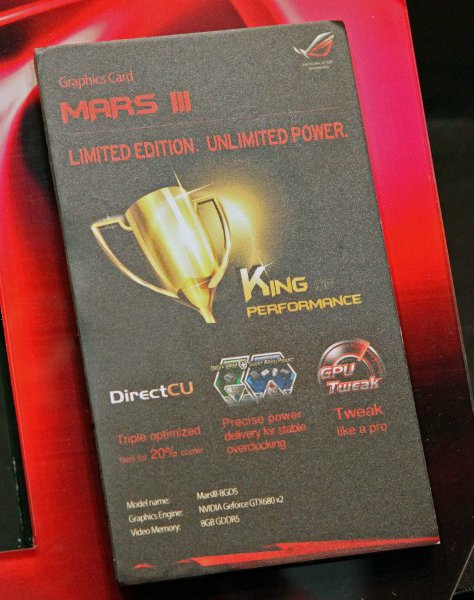 In terms of display outputs, the MARS III is furnished with three DVI ports and one mini DisplayPort. The single SLI connector allows up-to 4-way SLI if you really need it. Also featured is a 100% fan switch to maximise cooling when overclocking to the edges of what the cooler is capable of.

The colour scheme will not be to everyone's taste, but if the past is anything to go by this will be one of the most talked about, most expensive and rarest cards on the planet.

More images and discussion are available on VR-Zone and the ASUS ROG Facebook site.