Taipei, Taiwan  ASUS Republic of Gamers (ROG) announced the OC Showdown Formula Series 2016 and RealBench Challenge 2016, two distinct online overclocking competitions open to enthusiast overclockers from around the world  and offering them the chance to win both community acclaim and exclusive prizes, including a next-generation ROG motherboard. Both competitions will be hosted by and are available to enter at http://oc-esports.io.

OC Showdown Formula Series 2016 Round 1 opened on August 23rd, and runs until 26th September 2016. Round 2 is scheduled to begin on 28th October, running to 28th November, 2016. RealBench Challenge 2016 is a separate competition using a custom benchmarking tool, and comprises four distinct challenges that start on 2nd September 2016 and continue through to 5th December 2016.

ASUS ROG motherboards and graphics cards are the most popular choice for overclockers as tracked by HWBOT, so the two challenges put the worlds favorite overclocking gear at the center of the global stage.

In co-operation with HWBOT and partners der8auer, Open Benchtable, Seasonic®, Thermal Grizzly, OC Showdown Round 1 launched August 23rd and runs until 26th September 2016. Round 2 will follow, commencing on 28th October 2016 and continuing until 28th November 28th.

OC Showdown Formula Series invites overclockers from HWBOTs Rookie, Novice and Enthusiast leagues to compete using any ASUS- or ASUS ROG-branded motherboard, and to cool using only stock air- or water-based equipment  and to generate core temperatures in excess of 30°C. No extreme-cooling equipment or techniques are permitted in the Formula Series competition rounds, and overclockers of all abilities are invited to enter. Round 1 contestants must compete over three stages, measuring their overclocking achievements with XTU (Extreme Tuning Utility), GPUPI for CPU - 1B, and HWBOT x265.

Prizes will be awarded at the conclusion of each OC Showdown Round. Available Round 1 prizes include Strix X99 and ROG Maximus VIII Impact motherboards, premium Seasonic power supplies and high-performance Kryonaut thermal paste from Thermal Grizzly.

At the conclusion of OC Showdown 2016 itself, points from both Rounds 1 and 2 will be tallied to determine an overall winner. Contestants can also earn bonus points by carrying out mystery activities, to be revealed on the competition page. The overall winner will be awarded a next-generation ROG motherboard, an Open Benchtable portable benchmarking kit, a Delid-Die-Mate tool for easy reapplication of thermal-interface material to the processor and an exclusive ROG OC Showdown - Formula Series 2016 trophy. The second- and third-placed runners-up will also receive a next-generation ROG motherboard, Open Benchtable kit and a Delid-Die-Mate tool.

Prize draws running for the duration of the competition will see contestants drawn at random to win ROG T-shirts, exclusive ROG 10th-anniversary goodies and tubes of Thermal Grizzly thermal paste. 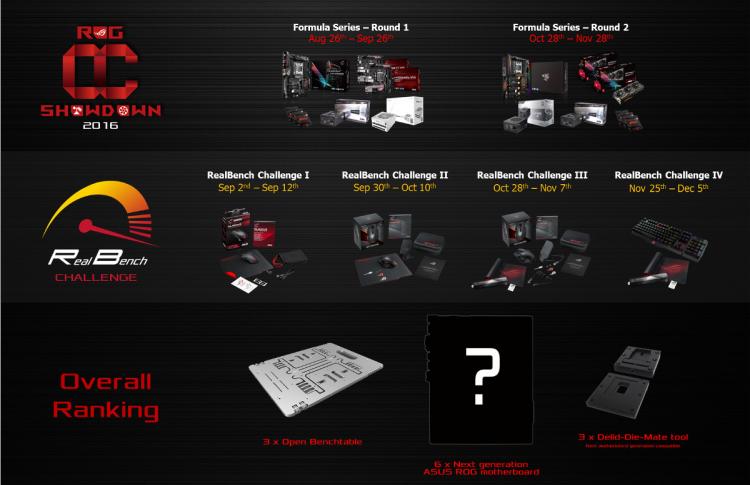 RealBench Challenge is an all-new overclocking competition wholly sponsored by the Republic of Gamers. Organize into four distinct challenges that run until 5th December 2016, Challenge I began on 2nd September 2016 and invites contestants from around the world to demonstrate their overclocking skills using the custom RealBench HWBOT Edition benchmark.

RealBench Challenge invites any overclocker using an ASUS- or ASUS ROG-branded motherboard to enter using only stock air- or water-based cooling equipment. Core temperatures must be a minimum of 30°C, and no extreme-cooling equipment or techniques will be allowed.

The four RealBench Challenge 2016 stages will each run for 11 days each. The full schedule is as follows: