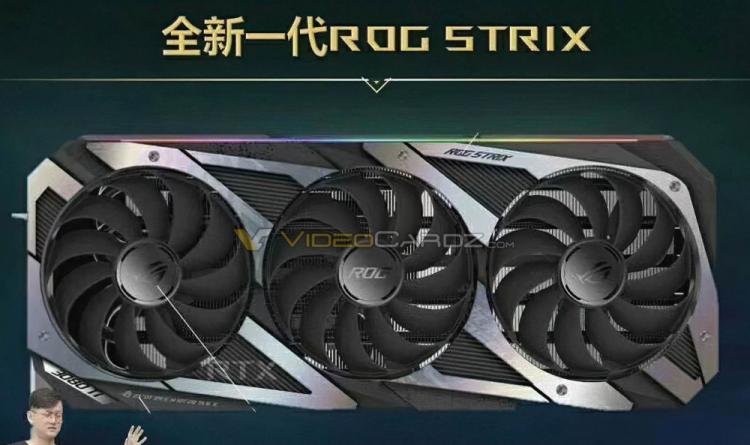 Graphics card manufacturing partners of both AMD and NVIDIA tend to put a lot of resources into the development of their proprietary cooling solutions, used as both functional feature and marketing tool to show off their aesthetic flare. Major revisions to the design are relatively rare, which ensures that their branding is coherent across the range for a long period. However it appears that the monstrous TDP of NVIDIA's RTX 30-series (rumoured to be 350W) has prompted just such a large revision among some AIBs, notably ASUS ROG.

Two months ago the above image of a prototype triple-fan ROG Strix cooler was leaked out of Asia. As a relatively early render it has one major anachronism - the use of RTX 3080Ti rather than RTX 3090 - but that aside the image looked plausible. Now it's been all but confirmed, with a new image of the actual card appearing via Videocardz.com. 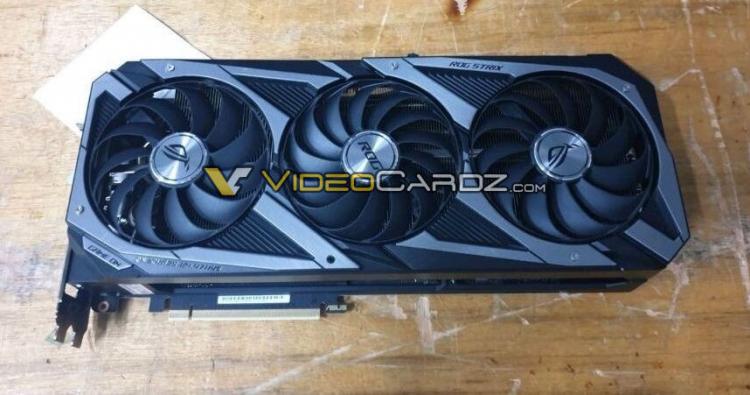 The chief external revision from the prototype is the removal of the RTX 3080 Ti nameplate from the bottom-left to be replaced with the rather generic 'Game On' slogan. Other aspects, including the triple-fan framework and combined used of plastic and brushed metal, have been carried over to a design that looks distinct from the old Strix cooler but with some of its old flavour still present.

This cooler is large, but apparently not much larger than the previous triple-fan Strix cooling solutions; it continues to have a 2.5-slot thickness for instance. More detail of the coolers internals such as fin stacks and heatpipes are impossible to discern from the images presented. While not confirmed, it's expected that the card will be powered by two 8-pin PCIe connectors rather than the new 12-pin connector found on the 30-series Founders Edition.

Triple-fan Strix coolers have typically been utilised for the flagship and at least one notch down the totem pole, so it's likely that their RTX 3080 variant will be equipped with this solution too. SKUs lower still, such as the RTX 3070 and 3060, may instead opt for similar dual-fan coolers.